The method of Methodism expands: Societies and the New Room

Growing in discipleship with a small group—like joining an exercise group for fitness or a parenting group to grow as a mom or dad—requires practicing every day what one learns when the group gets together.

The Wesleys were not the first to discover this. Their Oxford Holy Club, discussed in the first story of the series, was in the tradition of the religious societies that had been gaining in popularity in England since the 1670s. Some of the earliest members of the Holy Club eventually left other societies to join John, Charles, and the others.

As Holy Club members graduated from college, some going on to become priests in the Church of England, they formed societies similar to the Oxford Holy Club wherever they went. The Wesleys, for example, took the model to America on their missionary journey to Georgia.

Upon their return, the brothers joined and led societies. Each experienced the assurance of salvation, what John described as his heart becoming “strangely warmed,” after participation in society meetings.

Soon after his heart-warming experience, a former Holy Club member invited John to come to Bristol. George Whitefield, a fellow priest in the Church of England, had started a ministry of field preaching there, but was about to leave for his own missionary journey to America. 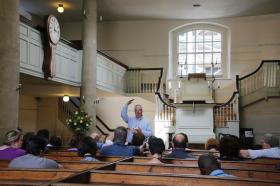 John Wesley developed the model of Societies, Classes, and Bands for the people of Bristol, and quickly used it in other places as well. Photo by Kathleen Barry, United Methodist Communications.

Wesley preached and began forming the faithful of Bristol into a Methodist Society. The purpose of the Methodist Societies was to support one another in the pursuit of “holiness of heart and life,” which means “universal love filling the heart and governing the life” (from “Advice to a People Called Methodist”).

Though by all accounts Whitefield was the superior preacher, the Society grew quickly under Wesley’s leadership.

The growth was so dramatic that just months after his first sermon, the Methodists in Bristol began building a meetinghouse called the New Room. The design of the New Room reflects the work of the Methodist Society in both loving God and their neighbors.

From the pulpit, John Wesley and others preached during the Society Meetings, which also included times of teaching and singing. Some of Charles Wesley's hymns were first sung there.

The fixed pews there today, are not original to the building. In Wesley’s day, the furniture was removable because the meetinghouse was also a center for the mission work of the Society. From the New Room, Methodists fed the poor, taught children, distributed remedies to those who could not afford to see a doctor, and served their community in other ways.

Wesley stumbled upon one of his innovations while serving the people of Bristol.

To pay the debt incurred in construction, a leader suggested to Wesley that each member of the Society donate a penny a week. To facilitate this collection, Wesley divided the Society into “Classes” of twelve and appointed Class Leaders who agreed to collect the money, and pay for those who could not afford it. 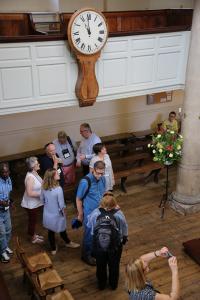 The pews in The New Room are not original, but the clock is. John Wesley advised his preachers to “Be punctual. Do everything exactly at the time.” Photo by Kathleen Barry, United Methodist Communications.

During their weekly visits, Class Leaders noted that some Society members were struggling in their pursuit of holiness. Wesley then expanded the Class Leaders' duties to include serving as spiritual coaches for the members they oversaw.

One-on-one meetings were soon replaced with weekly Class meetings, where “a more full inquiry was made into the behaviour of every person... Advice or reproof was given as need required, quarrels made up, misunderstandings removed.”

In addition to the Society and Class meetings, Bands of about five people of the same gender and marital status met to confess specific sins and struggles to one another. Estimates are that about 1-in-4 Methodists regularly participated in a band.

Methodists also attended worship at their local church weekly, and received the sacrament of Holy Communion.

The intent of all this activity was to grow people into discipleship leaders who lived out their love of God and neighbor, just as the Oxford Holy Club had done years before.

To keep members focused on their pursuit of holiness, Wesley developed the General Rules of Our United Societies. He wrote,

It is therefore expected of all who continue therein that they should continue to evidence their desire of salvation,

First: By doing no harm, by avoiding evil of every kind …;

Secondly: By … doing good of every possible sort, and, as far as possible, to all …;

Today, the General Rules have been adapted into the General Rule of Discipleship, “To witness to Jesus Christ in the world, and to follow his teachings through acts of compassion, justice, worship, and devotion, under the guidance of the Holy Spirit” (2012 BOD ¶1117.2.a).

While Wesley did not use the terms compassion, justice, worship, and devotion, these practices capture the fullness of the means of grace Wesley describes in the General Rules. 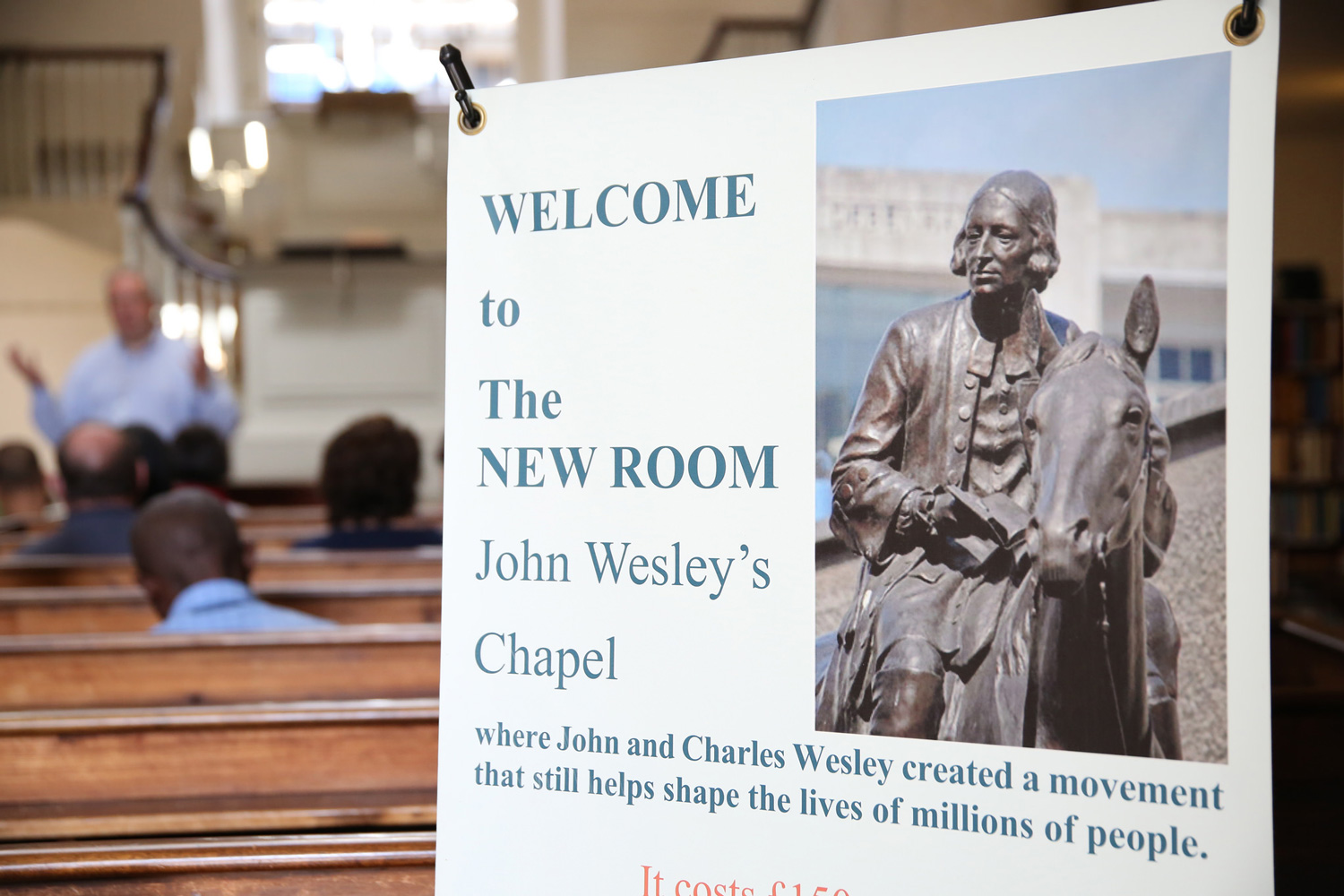 The New Room is “where John and Charles Wesley created a movement that still helps shape the lives of millions of people.” Photo by Kathleen Barry, United Methodist Communications.

Worship and devotion are works of piety—practices Wesley called “the ordinances of God.” Acts of devotion are practices we do in private to nurture our personal relationship with God. Acts of worship are what we do when we gather as a congregation to offer ourselves in service to God through prayer, praise, proclamation, and sacrament.

The Book of Discipline tasks Discipleship Ministries of The United Methodist Church with encouraging, advocating for, and providing resources, training, and support to facilitate the formation of accountability groups in United Methodist churches.

The 18th century Class meeting of the early Methodists has been reimagined into Covenant Discipleship Groups and Class Leaders for today.

Learn more about Covenant Discipleship Groups and our call of disciple making in Part 3.

Editorial note: This story was first published on September 27, 2016.