One branch of our United Methodist roots was nurtured in the soil of the Church of England. John Wesley, his brother Charles, and a host of others formed societies throughout England to help people grow in their Christian faith. In the late 1760s Methodist societies began to gather in America.

Philip Otterbein participated in Francis Asbury's ordination at the Christmas Conference. Photo from An Album of Methodist History, Abingdon-Cokesbury Press.

On Christmas Eve 1784, the Methodist preachers in the United States came together at Lovely Lane Chapel. Over the next 10 days, they founded the Methodist Episcopal Church and Francis Asbury was ordained elder and then elected bishop at this gathering known as the Christmas Conference.

Church of the United Brethren in Christ (1800)

Another branch of United Methodism grew in the soil of the German Reformed Church and the Mennonites. As Methodism was growing in the United States among English speakers, a similar movement was happening among the German-speaking population.

Around 1767, German Reformed pastor Philip William Otterbein, heard a sermon by Mennonite pastor Martin Boehm. Although their two churches did not look kindly on one another, Otterbein announced to Boehm, "We are brethren."

In 1800, the movements each of these leaders started within their respective denominations came together to form the Church of the United Brethren in Christ with Otterbein and Boehm as their first bishops. Asbury, Boehm, and Otterbein knew one another and often shared in ministry together.

In the late 1700s, a German Lutheran lay person named Jacob Albright joined a Methodist class in Pennsylvania. When the class named him as a lay preacher, he began sharing the gospel throughout central Pennsylvania. In 1803, Albright was ordained and a new denomination was formed that in 1816 took the name Evangelical Association. 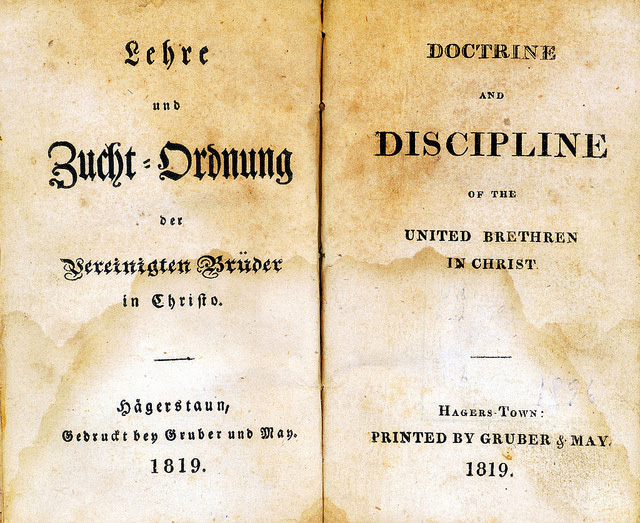 The Church of the United Brethren in Christ was a bilingual church of German and English. Photo courtesy United Methodist Archives and History.

At the following General Conference in 1844, the issue of a bishop owning slaves was an important debate. When the General Conference failed to come to agreement, a Plan of Separation was adopted that described how to divide the church. Two years later, the churches in the states where slavery was legal formed the Methodist Episcopal Church, South, a separate denomination.

In the 1880s, early evidence of dissension was emerging in the Evangelical Association. Rivalries between leaders and disagreements over the role of bishops seemed to create irreconcilable differences. In 1887, all of this energy was focused on who had authority to set the place for the 1891 General Conference.

Although the General Conference voted to give that responsibility to the Board of Publication, others wanted to keep the decision with the East Pennsylvania Conference who had historically made the selection. When neither side yielded, two General Conferences were held in 1891 and the church was effectively divided. In 1894, the East Pennsylvania group met in Illinois and formed a new denomination, the United Evangelical Church.

The United Methodist Church was formed by the joining of the Evangelical United Brethren and the Methodist Church. Video image courtesy of the General Commission on Archives and History.

Finally, in April 1968 in Dallas, Texas, the Uniting Conference brought together this family of churches that shares so much history. The Evangelical United Brethren Church and the Methodist Church joined to form The United Methodist Church. The merger dissolved the Central Jurisdiction and all congregations were grouped geographically.

Today's United Methodists share a rich history. Through our steps and missteps God continues to work in and through us to make disciples of Jesus Christ for the transformation of the world.

To learn more, explore the website of The General Commission on Archives and History of The United Methodist Church. They have published a timeline of significant events in our history.