A Founding Brethren: Facts for United Methodists about Otterbein

When we think about United Methodist history, well-known names like John Wesley, Charles Wesley and Francis Asbury come to mind. Others, whose names may be less familiar, are also important.

For example, you may not know much about Philip William Otterbein, an important figure in our shared history. He is a founder of the Church of the United Brethren in Christ, one of the predecessor denominations of our United Methodist Church. 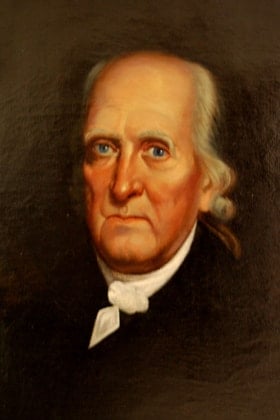 Otterbein was a contemporary of the Wesleys and a friend of Asbury. He and the Church of the United Brethren in Christ ministered to German speakers in America at the same time the Methodist movement was growing among English speakers.

These 10 facts serve as a brief overview of Otterbein's life and ministry. They also highlight the connections between two historic church movements that nearly 200 years later would become part of The United Methodist Church.

1. He was born in Germany and later came to America.

On June 3, 1726, Philip William Otterbein was born to John Daniel and Henrietta Otterbein, in Dillenburg, Nassau, Germany. His father was a pastor and teacher.

2. All of his siblings either became pastors or married pastors.

His mother Henrietta gave birth to ten children, three of whom died in infancy. Otterbein and all five of his surviving brothers became ministers, and their only sister married a pastor.

One of his brothers was also well known. George Godfrey Otterbein wrote several religious books, some of which Otterbein used in his churches in America.

Otterbein’s words when meeting Martin Boehm, “We are brethren,” inspired the name of the Church of the United Brethren in Christ. Photo by Jay Rollins, United Methodist Archives and History.

3. He preferred the name William.

4. His words inspired the name of the Church of the United Brethren in Christ.

Otterbein attended a Mennonite meeting held in the barn of a man named Isaac Long in Lancaster, Pennsylvania. After hearing Martin Boehm's sermon, Otterbein approached the Mennonite preacher, shook his hand and said, "Wir sind Brüder" (We are brethren/brothers). From that time on, the two men shared a close working relationship.

5. Francis Asbury may have convinced Otterbein to move to Baltimore.

When invited to pastor the German Evangelical Reformed Church in Baltimore, Maryland, Otterbein initially declined. At the urging of the outgoing pastor Benedict Schwope, Francis Asbury wrote to the German pastor whom he had never met. Several months after Asbury's letter, Otterbein accepted the call. 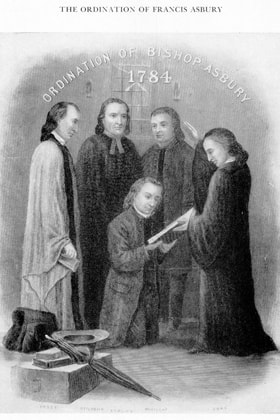 Asbury knew Schwope and the German Evangelical Reformed Church in Baltimore well. The first Baltimore Methodist Society met at the church before building their own chapel on Lovely Lane.

When Otterbein moved to Baltimore, he and Asbury became close friends. At times, the two leaders would bring together some of their preachers for bilingual evangelistic gatherings. The Methodists preached in English and the United Brethren in German.

7. Otterbein participated in the conference that formed the Methodist Episcopal Church.

On Christmas Eve 1784, the Methodist preachers in America met at Lovely Lane Chapel to begin a 10-day conference that would become known as the Christmas Conference. In addition to forming the Methodist Episcopal Church, another of the predecessor denominations of The United Methodist Church, Francis Asbury was ordained a deacon, an elder, and elected and consecrated a bishop on three consecutive days. At the invitation of Asbury, Otterbein participated in the ordination of his friend and colleague.

8. A Methodist assisted Otterbein when he ordained the first United Brethren Church preachers. 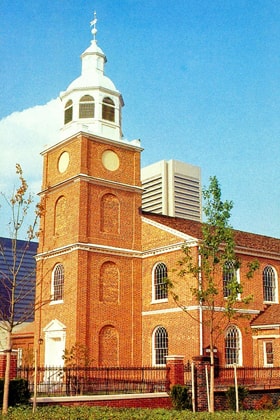 Philip William Otterbein died on November 17, 1813, just a few weeks after those ordinations. Several months later, a session of the Baltimore Conference of the Methodist Episcopal Church was adjourned to Otterbein's church where Francis Asbury led a memorial service for his friend. "Forty years have I known the retiring modesty of this man of God," Asbury wrote in his journal, "towering majestic above his fellows in learning, wisdom, and grace, yet seeking to be known only of God and the people of God."

Otterbein is buried on the site of the church he served for nearly 40 years, which was soon after renamed The Otterbein Church, and later became The Old Otterbein United Methodist Church.

10. Toward the end of his life, Otterbein destroyed his sermons and other papers.

Little of Otterbein's work survives today. Shortly before his death, he is said to have burned his sermons and other writings in a show of modesty.

His only known surviving sermon, "The Salvation-Bringing Incarnation and Glorious Victory of Jesus Christ over the Devil and Death," was preached in 1760 and published in 1763. The sermon was lost to history until 1962 when Arthur C. Core of United Theological Seminary found a reference to it In the Library of Congress.

Explore more stories and videos about the history of The United Methodist Church.