2020 had it all, unfortunately, when it comes to natural disasters.

Wildfires, derechos, hurricanes and tornadoes battered the lives, homes and churches of United Methodists. Running concurrently since March was the coronavirus, deadly in its own right and complicating rescue and recovery efforts.

“The struggles in some ways brought people closer together,” said Roland Fernandes, the top executive of United Methodist Global Ministries and the United Methodist Committee on Relief. “You’re supposed to change and adapt and I think that people have shown a lot of resilience.”

More than a building

The Rev. Karli Pidgeon, who began work as district superintendent of the Lake Charles District of the Louisiana Conference on July 1, didn’t get much of a “get to know you” period in her new job. 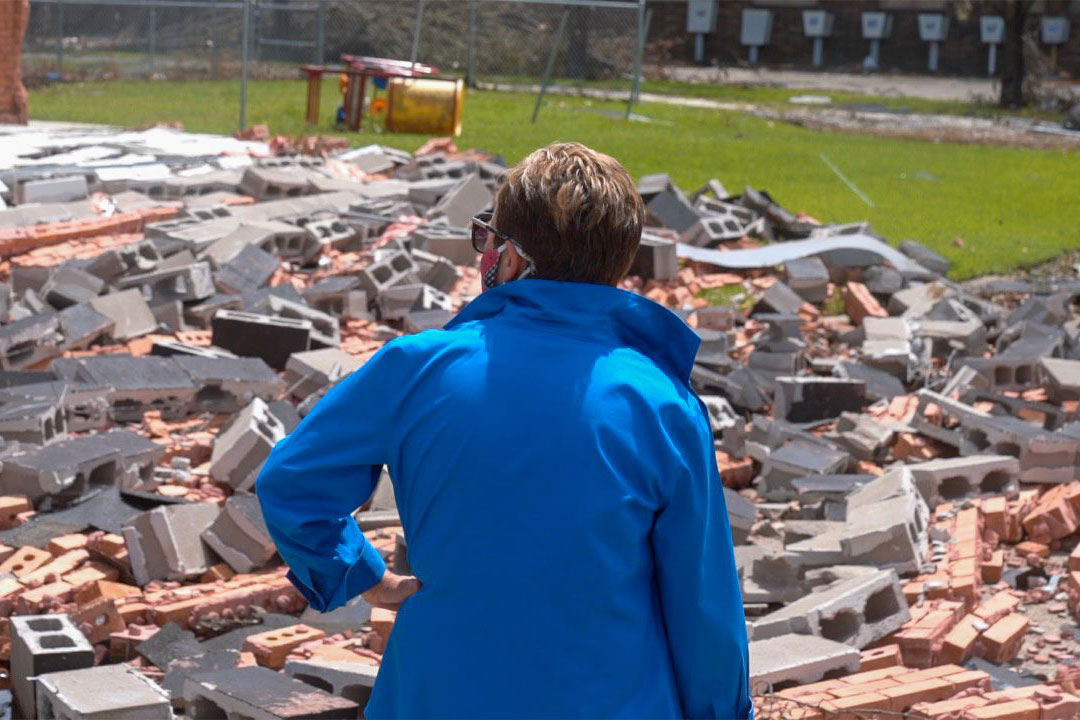 “The first hurricane hit in August,” Pidgeon said. “I barely knew where all the churches were.”

Half of the district’s churches were damaged to varying degrees. One, Grand Chenier United Methodist Church in Chenier, Louisiana, was destroyed.

A native of Baton Rouge, Louisiana, Pidgeon said she never doubted the determination of Louisiana United Methodists to come back.

“I think it’s kind of in our blood,” she said. “I don’t know if it’s in the water and the crawfish, but that is who we are. We are fighters and we will kind of band together and work.”

University United Methodist Church in Lake Charles, Louisiana, one of Pidgeon’s churches, is still unable to use their building after Hurricane Laura damaged it on August 27.

“We really don’t have a choice but to remind ourselves that the church is more than a building,” said the Rev. Angela Cooley Bulhof, pastor of University.

In Nashville, Tennessee, Braden Memorial United Methodist Church was one of three houses of worship damaged by an early morning tornado on March 3.

“It is going to be rebuilt and we’ve had some progress on the roof,” the Rev. Sheila Peters said of the Braden Memorial building. “With COVID-19, it has complicated a whole host of different things. Renovation deadlines – none of them are etched in stone.”

Peters says the church is at least a couple months away from holding services in their home sanctuary.

“It’s taken much longer than I would have expected,” Peters continued. “Just working through all the logistics and working with insurance and contractors related to that. It gives us a glimpse into what people may be going through when it is their personal residence that they’re trying to live in and get renovated or repaired or restored.”

The Rev. Brett Strobel and his wife were celebrating their anniversary on the coast of Oregon in early September when they learned the Almeda wildfire was near their home in Talent, Oregon. It turned out that the Strobel house survived, but many others weren’t as lucky.

“It had a devastating impact on the communities of Talent and Phoenix (Oregon),” said Strobel, lead pastor of Ashland First United Methodist Church in Ashland, Oregon.

“One parishioner noticed a flurry with the lights and thought ‘This is odd,’” Strobel said. “He stepped out his back door to hear the crackling of fire, and he saw the fire in the trees right behind his house. He grabbed his partner and said, ‘We need to leave now.’”

In the aftermath, church members stepped up to help displaced fire victims.

“People responded with food, clothing, housing, money — whatever they could to help folks out,” Strobel said. “Leadership, resources, support, help; The church has just been remarkable in response. The difficult challenge or hurdle perhaps has been the COVID restrictions. … Being able to see each other face to face, be able to hold each other and support those who’ve lost everything. We haven’t been able to do that in person. I think that’s very, very difficult.”

Donate online to disaster response and recovery efforts by the United Methodist Committee on Relief.

Complicating matters across the country was “giving fatigue,” Fernandes said.

“You may have noticed over the last few years the number of hurricanes and disasters increasing so much,” Fernandes said. “Many people didn’t have the financial capacity to contribute, and it had a huge impact on our U.S. disaster response. U.S. disaster giving was slower than the previous years and significantly lower.

In 2020, Global Ministries created the UMCOR-Sheltering in Love Advance fund, which collected more than $2 million in new donations to equip partners to assist vulnerable populations around the world impacted by COVID-19.

“We felt the decline in giving in our capacity to respond in some places,” Fernandes said. “But I think we still did pretty well overall during all of the restrictions that we faced.”

Braden Memorial, which is set in a trendy east Nashville business district, is looking to the future—tailoring its rebuilding with the goal of doing more to assist the homeless and promote accessible healthcare.

“We envision ourselves holding health fairs, access to healthcare (seminars), different kinds of things within the church,” Peters said. “In order to do that, we’ve got some basic bathrooms we need to upgrade.”

*Jim Patterson is a Nashville freelance writer. Contact him by email.