Thanks for trying the quiz. Here are more detailed answers.

1. We know sons John and Charles. How many children did Susanna Wesley birth?
The correct answer is 19, including two sets of twins. Unfortunately, nine died in infancy or soon thereafter, so Wesley is known to have raised ten children. while focusing on religious education, general education, order, discipline, and manners. 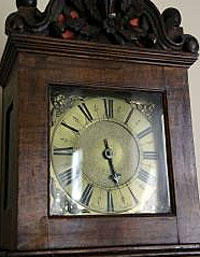 2. Susanna was a strict organizer who assigned specific times for her children's education, naps, meals, and bedtime. True or false?
The correct answer is true. The Wesley house ran on a tight schedule. "The children were always put into a regular method of living," she wrote. Times were assigned for naps, education, meals, and bedtime. Even infants were put on a schedule for sleeping in order to train them for the family schedules. The child-filled Wesley household was not chaotic. "The family usually lived in as much quietness as if there had not been a child among them," Susanna remembers. 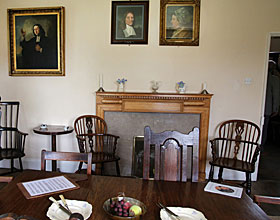 > Read more about Susanna at Courage and conviction: A woman's leadership through a difficult time

4. Susanna sometimes referred to John to be…
The correct answer is all of the above. After a tragic fire engulfed the Old Rectory, Susanna said that her son "Jacky" was a "brand plucked from the burning, a reference to Zechariah 3:2. Later Susanna stated that John must have been saved from the fire by God for a reason. This was a lesson that John took to heart and strived to live out during his entire ministry.

> Read about the tragic fire at Shaped by tragedy and grace: Wesley's rescue from fire
> Also read What we can learn from the words on John Wesley's tomb

5. According to Susanna's household schedule, this/these happened most evenings:
The correct answer is all of the above. After dinner at 6:00, the process of getting the children ready for bed began at 7:00 p.m. with the youngest child. All children were in bed by 8:00 p.m., whether they were ready for sleep or not. "[T]here was no such thing allowed of in our house as sitting by a child till it fell asleep," she wrote.

6. Susanna was the prime educator for her children, teaching them:
The correct answer is all of the above: the Wesley children were taught the entire alphabet the day after their fifth birthday, how to read passages from Scripture, and traditional classical studies in England. In the Wesley household, 9 a.m. to Noon and 2 to 5 p.m. were reserved for the children's education, a top priority for Susanna. "It is almost incredible what a child may be taught in a quarter of a year, by a vigorous application," she remembered.

> Learn more at Mother knows best: Parenting tips from Susanna Wesley
> Explore the past during the Wesley pilgrimage 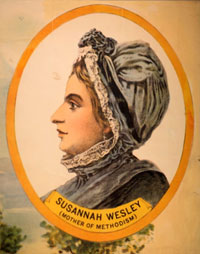 8. Susanna is known for her strict and punctual parenting, which helped John later form…
The correct answer is the Methodist Rule of Life. The Methodist rule of life is simple and practicable. It was intended by John Wesley to help Christians obey Jesus' teachings, summarized by him in the Great Commandments: "You shall love the Lord your God with all your heart, and with all your soul, and with all your mind. … and You shall love your neighbor as yourself" (Matthew 22:37-40). Methodists were helped to live the Christian life, shaped by the General Rules, when they met weekly in their small group, known as a "class" or "class meeting."

> Read more about the Methodist Rule of Life in What 'methods' might Methodists use?

9. She knew her children needed regular parental attention, so she…
The correct answer is scheduled an hour a week to talk to each child. Dale Patterson, from the General Commission on Archives and History explains: "She would mark out at least an hour, and so it might well be that Tuesday at 3 was a time that was exclusively devoted to John, let's say. Now that doesn't mean she ignored him the rest of the week. But that was their time to sit down and be together. She did that with all of her children." 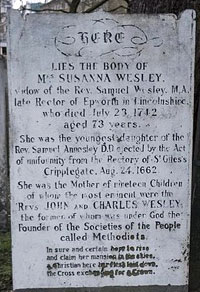 10. Susanna suggested this unconventional idea to her son John:
The correct answer is lay people could serve as local preachers. Again, Dale Patterson explains: "When John started traveling the circuit and preaching, he was late. And he shows up and a gentleman that he knew, a layman, was filling in for him. Well, he was aghast. A layman kind of almost preaching. Well, you know who told him to take another look? His mother. He listened and realized this guy's doing a good thing. That changed the character of our Methodist revival."