Courage and conviction: A woman's leadership through a difficult time

There was dissension in the church. Rare, I know.

Then a woman stepped in with the wisdom to lead and the courage to stand by her convictions. 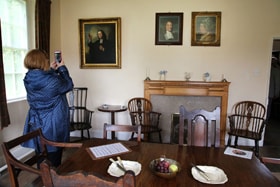 The Wesley family gathered for meals in the dining room of the Old Rectory in Epworth. Portraits of Samuel and Susanna Wesley are mounted above the fireplace, with a portrait of John Wesley to the left. Photo by Kathleen Barry, United Methodist Communications.

Pastor Samuel had been gone for weeks. He was attending the annual meeting of the Church of England in London. Convocation began on December 7, 1711, 140 miles from the pastor's congregation in Epworth. Travel was difficult and communication slow. He would be gone until sometime in March.

In his absence, Pastor Samuel entrusted the congregation to the care of their associate pastor, the Rev. Godfrey Inman. Unfortunately, Inman "was not so efficient as was desirable," an 1866 book graciously records. We might simply say he couldn't cut it.

Some members had grumbled about the associate before. During this extended absence, however, many in the congregation felt they were not receiving the spiritual guidance they desired, including the pastor's wife Susanna.

Rather than complain, Susanna cared for the spiritual well-being of her family by leading Sunday afternoon prayer gatherings for her ten children, including John and Charles Wesley who were eight and four respectively at the time.

"I thought it my duty to spend some part of the day in reading to and instructing my family," Susanna Wesley wrote to Samuel, "especially in your absence, when, having no afternoon service, we have so much leisure for such exercises." She thought family worship was more beneficial than private devotions.

She invited everyone in the house to join her, including her servants. When one of the young servants told his parents about the gatherings in Susanna's kitchen, they asked if they could attend. Susanna, of course, said yes.

Others began to join them each week. Soon this "family devotion time" was drawing 40-50 people to the Old Rectory, Samuel and Susanna's home. Susanna would read a sermon and lead some singing. The people prayed together and talked about their faith. Great. Problem solved. Right?

Well, not to everyone.

Inman was upset. He seemed to feel that Susanna was usurping his authority as the leader of the congregation.

Rather than dealing with her directly, Inman proved his lack of leadership skill. He found a handful of people to help him work behind the scenes to shut down Susanna's Sunday afternoon gatherings.

Inman's crew wrote Samuel to complain. They apparently expected him to tell Susanna to stop hosting the devotions.

They had no idea with whom they were dealing.

Susanna stands up to criticism

In a letter to Samuel dated February 6, 1712, Susanna explains why the gatherings started and how attendance grew. She expresses a bit of remorse at losing this special family time and addresses her husband's concerns about what it looks like for the pastor's wife to be leading devotions. The spouses of other pastors were not doing these types of things.

Nearly three weeks later, February 25, 1712, Susanna writes Samuel again. It appears that Inman and his supporters have ramped up the accusations. They are pressuring Samuel to put an end to it.

Susanna again defends her actions and implies that Inman may be jealous. Her Sunday evening group has greater attendance than the Sunday morning services he leads. She reports that 200-300 are now attending.

After making her case, Susanna puts the issue in the hands of her husband, ready to abide by his decision. "[W]hen you have duly considered all things, let me have your positive determination," she writes.

She then ends the letter with this amazing sentence: 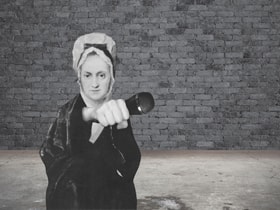 Mic drop (mīk dräp) noun. The act of letting a microphone fall to the floor after expressing oneself so definitively there is no valid response or debate. The oratory equivalent of spiking a football. Illustration by Trevor Scruggs, United Methodist Communications.

If you do, after all, think fit to dissolve this assembly, do not tell me that you desire me to do it, for that will not satisfy my conscience; but send me your positive command, in such full and express terms as may absolve me from all guilt and punishment for neglecting this opportunity of doing good, when you and I shall appear before the great and awful tribunal of our Lord Jesus Christ.

Susanna took seriously her role in the spiritual development of her children. Each of the ten who survived infancy had about an hour of one-on-one time with her each week where she provided spiritual direction. She remained a spiritual influence long after the children left home. Early in his ministry, John Wesley consulted his mother when deciding to accept an invitation to travel to America as a missionary.

Historians speculate on how formative the kitchen meetings may have been on young John and Charles Wesley. What we know is that small groups led by laypeople, both men and women, would later be a key component of the Methodist movement they would found. Women often led small groups called classes and bands, and John Wesley allowed female lay preachers in Methodist societies.

When churches are struggling they sometimes need someone like Susanna Wesley, a woman who knows what needs to be done and is strong and courageous enough to withstand the criticism that follows.

This feature was originally published on November 8, 2016, and updated January 2022.