Few moms know what it's like to raise 10 children like Susanna Wesley.** Her son John, the founder of the Methodist movement, published a letter in which his mom shared her "principal rules" for parenting, covering things big and small.

Because our understandings of child development have changed greatly in the nearly 300 years since Susanna was raising her kids, we might not agree with all of her advice. But some still rings true today.

Devotions – "The children of this family were taught, as soon as they could speak, the Lord's prayer, which they were made to say at rising and bedtime constantly," Susanna reminded her son.

Worship and Music – When the Wesley children were a little older, the day began with reading or singing a psalm, reading an Old Testament chapter, and saying private prayers—all before breakfast. At the end of the school day, they paired up to read a psalm and a New Testament chapter.

Sabbath – Sundays were special in the Wesley house. The children "were very early made to distinguish the sabbath from other days," Susanna wrote. They were expected to participate in the family prayers, "which they used to do by signs before they would kneel or speak."

Focus – In the Wesley household, nine to noon and two to five were reserved for the children's education, a top priority for Susanna. "It is almost incredible what a child may be taught in a quarter of a year, by a vigorous application," she remembered.

No goofing off – Susanna expected the children's full attention during the education hours. "Rising out of their places, or going out of the room, was not permitted unless for good cause, and running into the yard, garden or street, without leave, was always esteemed a capital offence." I imagine Susanna smiling as she wrote that last line to her now grown son.

Reading – Each child was taught to read at age 5, both the boys and the girls. Susanna noted, "[P]utting children to learn sewing before they can read perfectly is the very reason why so few women can read fit to be heard, and never to be well understood." She would not allow that for her daughters or sons. 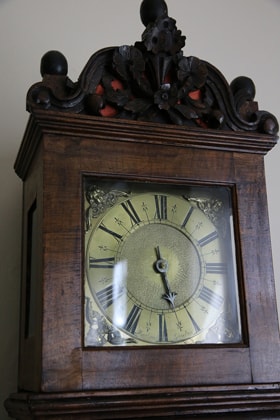 Susanna Wesley observed a strict schedule with times for education, naps, meals, and bedtime. This clock, once owned by John Wesley, is on display at the Wesley family home in Epworth, England. Photo by Kathleen Barry, United Methodist Communications.

Routine – The Wesley house ran on a tight schedule. "The children were always put into a regular method of living," she wrote. Times were assigned for naps, education, meals, and bedtime.

Self-regulation – Susanna was convinced that "self-will is the root of all sin and misery," and worked to help her children develop self-control.

Positive reinforcement – Susanna believed, "That every signal [sic] act of obedience…should always be commended and frequently rewarded." When a child misses the mark, Susanna recommends that parents "sweetly" direct the child on "how to do better for the future."

Discipline – When needed, Susanna strived to discipline appropriately. "Some [infractions] should be overlooked and taken no notice of, and others mildly reproved," she wrote, "but no willful transgression ought ever to be forgiven children without chastisement, less or more, as the nature and circumstances of the offence require."

Forgiveness – Susanna taught that a child should never be punished for the same offense twice, and "that if they amended they should never be upbraided with it afterwards."

Peace – "The family usually lived in as much quietness as if there had not been a child among them," Susanna remembers.

Bedtime – After dinner at 6, the process of getting the children ready for bed began at 7 p.m. with the youngest child. All children were in bed by 8 p.m., whether they were ready for sleep or not. "[T]here was no such thing allowed of in our house as sitting by a child till it fell asleep," she wrote.

Naps – As infants, the children napped on a schedule. "This was done to bring them to a regular course of sleeping," Susanna reasoned.

Dining – Mealtime was family time. When the children were young, "At dinner their little table and chairs were set by ours," Susanna recalls, near enough to be supervised. Children graduated to the dining room table, "As soon as they could handle a knife and fork."

No snacking – "Drinking or eating between meals was never allowed," Susanna shares, "unless in case of sickness which seldom happened."

Choosing meals – Susanna expected the children to eat what was served. "They were never suffered [permitted] to choose their meat, but always made to eat such things as were provided by the family," Susanna wrote.

Medicine – "They were so constantly used to eat and drink what was given them," she remembers, "that when any of them was ill there was no difficulty in making them take the most unpleasant medicine."

Polite speech – The children were given "nothing they cried for, and instructed to speak handsomely for what they wanted."

No lying – Susanna believed that children were tempted to lie when they feared punishment. "To prevent this," she reasoned, "a law was made that whoever was charged with a fault, of which they were guilty, if they would ingenuously confess it, and promise to amend," they would not be punished.

Respect for property – The Wesley children were taught to keep their hands off of another's stuff, even "in the smallest matter, though it were but of the value of a farthing [1/4 of a penny], or a pin; which they might not take from the owner without, much less against his consent."

John Wesley shared this advice from his mom in his published Journal as he reflected on her death. The entry is dated August 1, 1742, the day of her funeral. He hoped it would help others caring for "a numerous family."

Susanna's devotion to her faith and her family clearly shaped her son's character and had an impact on countless lives.

*Susanna Wesley gave birth to 19 children (including two sets of twins). Unfortunately, nine died in infancy or soon after.