What we can learn from the words on John Wesley's tomb

Motivational experts sometimes encourage us to write eulogies for ourselves. Looking at life from some imaginary time in the future can help us order our priorities and focus on the things most important to us.

During the Wesley Pilgrimage in England, participants pause before the tomb of John Wesley located in a quiet spot behind Wesley's Chapel, London. The epitaph of this founder of the early Methodist movement contains a lesson etched in stone as poignant today as it was in the days immediately following his death. 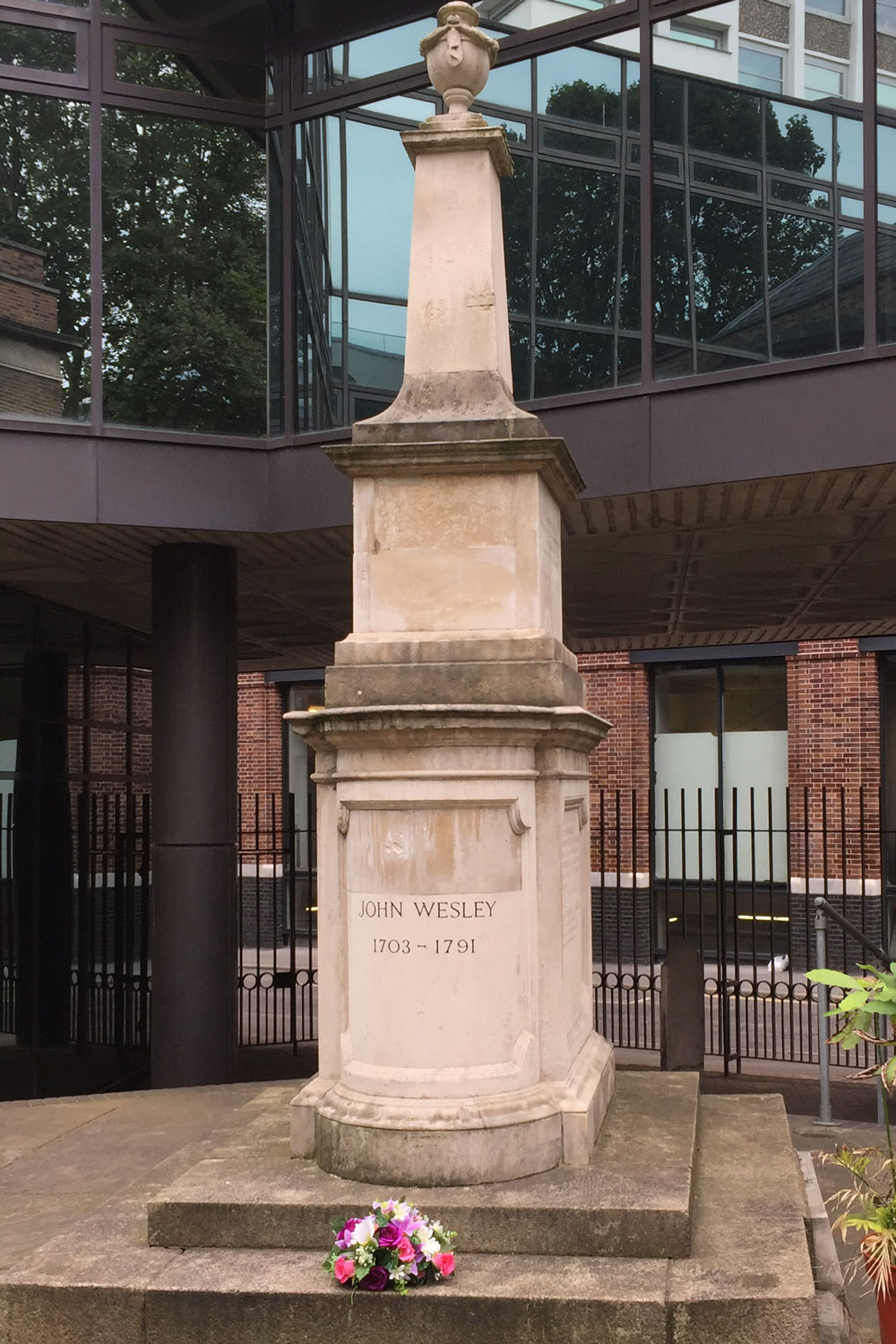 A lesson in stone

On March 2, 1791, in the home on the other side of the property, "with a simple 'Farewell' upon his lips, John Wesley, in the eighty-eighth year of his age, passed from the scene of his great evangelistic toils on earth to the joy of his everlasting reward," biographer Richard Green eloquently writes of Wesley's death (John Wesley—Evangelist, 1905).

A week later, early on the morning of March 9, a small group gathered at the tomb where Wesley's body was laid to rest. Beginning the service at around 5:00 a.m. helped keep the gathering intimate. Reports indicate that tens of thousands visited City Road Chapel (as Wesley's Chapel was then known) the day before to pay their last respects.

The epitaph on Wesley's tomb is remarkable. It shares the story of his life and ministry. Describing Wesley as a great light that enlightened the nations and called the church to renewal, the inscription references his lengthy career of writing and work for the church. He "witnessed in the hearts and lives of many thousands," the epitaph reads, and saw God's provision for his work to last for future generations.

Before giving the date and circumstances of his death, the inscription concludes, "Reader, if thou art constrain'd to bless the instrument, give God the glory." We might more commonly say, if you feel compelled to honor the person, praise God more.

To the memory of the venerable
John Wesley, A.M., late fellow of Lincoln College, Oxford.

This great light arose (by the singular providence of God) to enlighten these nations, and to revive, enforce, and defend, the pure apostolic doctrines and practices of the primitive church:

which he continued to do, both by his writings and his labours for more than
half a century:

And to his inexpressible joy, not only, beheld their influence extending, and their efficacy witness'd in the hearts and lives of many thousands, as well in the western world as in these kingdoms:

But also, far above all human power of expectation, liv'd to see provision made by the singular grace of God, for their continuance and establishment to the joy of future generations.

Reader, if thou art constrain'd to bless the instrument, give God the glory.

After having languished a few days, he at length finished his course and his life together, gloriously triumphing over death, March 2nd An. Dom. 1791 in the eighty-eighth year of his age.

*Capitalization and italics have been edited for easier reading.

After reading these words, one pilgrim whispered, "ever the evangelist, even in death." Even his tomb calls us closer to Jesus.

A tool in God's hands

In the Bible, Moses receives an extraordinary call from God while standing before the burning bush. God tells Moses to go to the leader Egypt—the superpower of the world at the time—and ask him to free the Hebrew slaves. Moses' immediate response is to tell God all the reasons why he is not the right person for the job.

God reminds Moses, "I will be with you." God is not asking Moses to acquire the people's freedom, but to be the instrument through which God will obtain the release of the Hebrew people.

As if to illustrate the point, God asks Moses a simple question, "What is that in your hand?" Moses is carrying a shepherd's staff, an instrument of his trade, a tool. God then uses Moses' hands to transform the staff into a snake and back again.

As Moses is able to use the staff, God can use Moses to save the Israelites from slavery (Exodus 4:1-5).

Wesley's tombstone reflects the humility of one who like Moses understood his role as an instrument in God's hands.

What's in your hand?

We will not likely influence the spiritual lives of millions of people over hundreds of years, as John Wesley has, but God desires to use us also. Each of us has a role to play in sharing the good news of the gospel of Jesus Christ with our neighbors and the world.

That sounds overwhelming, but like Moses and Wesley, we are not the primary actors. God is. Our role is to serve as instruments through which Jesus' love for the world flows to all. 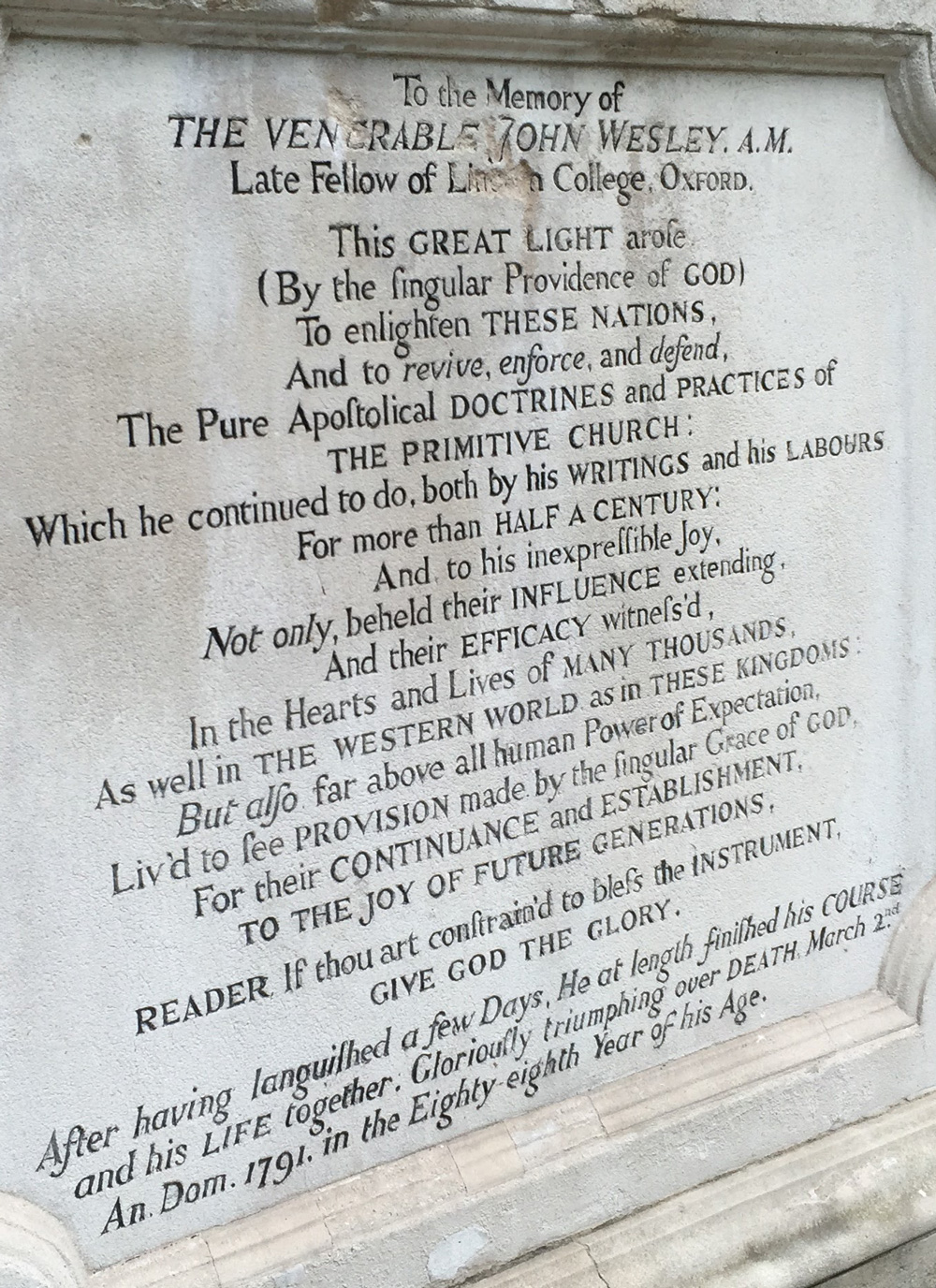 God asks us the same question, "What is in your hand?" What gifts, abilities, passions, and resources do you have? Are you willing to allow God to use them to bless another, to love people the way God loves you?

Our role is not to do the work of God, but to make ourselves available so God can act through us. We are tools in the hands of God, instruments through which God's kingdom comes on earth as it is in heaven.

Wesley was an instrument of God's grace. So was Moses. We too can allow God to use us.

Through words etched in his tombstone more than 225 years ago, John Wesley continues to teach us what it means to live fully as disciples of Jesus Christ, and to give all the glory to God.

Editorial note: This story was first published on February 27, 2017.