You’ve heard it said, “Everybody talks about the weather, but nobody does anything about it.” When Mark Twain—who may have been quoting Charles Dudley Warner—popularized that saying in the 19th century, everyone just laughed. People thought there was nothing humans could do to change the weather.

While we still can’t make a rainy day sunny, scientists today report that human action can affect the weather, and over the years has altered it… maybe dramatically.

As United Methodists, we heed the call to do all in our power to care for planet Earth. Psalm 24 tells us, “The earth is the Lord’s and everything in it, the world and its inhabitants too.” In the Creation narrative in Genesis 1, God instructs human beings to care for the earth and all God created to dwell there.

“The Natural World” portion of our Social Principles reflects these scriptures. “All creation is the Lord’s,” the section opens, “and we are responsible for the ways in which we use and abuse it.” 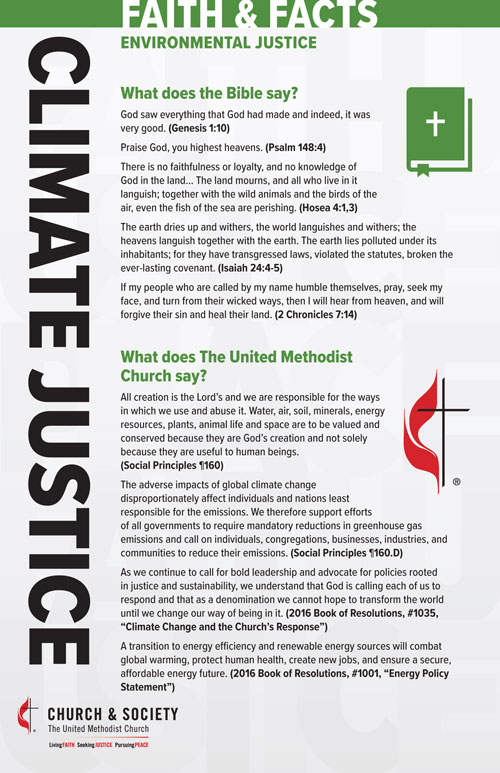 According to the Faith and Facts Card on Climate Justice produced by the United Methodist Board of Church and Society, “Carbon dioxide and other heat trapping pollution…are collecting like a blanket in the atmosphere.” This blanket is slowly warming the planet.

“The adverse impacts of global climate change disproportionately affect individuals and nations least responsible for the emissions,” The Social Principles of The United Methodist Church states. This means those living in industrialized countries bear a responsibility to decrease our emissions to lessen the effects of climate change on those who produce far fewer of these pollutants.

By reducing the production of emissions known as greenhouse gases, Christians with easy access to energy can do something about the weather after all. Reducing carbon dioxide and other pollutants will help slow these global trends and address some of the adverse effects on our neighbors and ourselves.

Save electricity: According to the United States Environmental Protection Agency, the production of electricity generates the largest share of greenhouse gas emissions. “Approximately 67 percent of our electricity comes from burning fossil fuels, mostly coal and natural gas.”

Also, be aware of your energy use. Opening the curtains or blinds may allow us to turn off the lights during the day. Church and Society also recommends decreasing the use of our air conditioners.

Use renewable energy: If you are able, investigate and invest in green energy sources like wind or solar power. These reduce the need for the types of electricity production that emit greenhouse gases.

Transportation: The cars we drive are also big producers of carbon dioxide. Choosing to carpool, use public transportation, or drive a low emission vehicle will help significantly reduce our contribution to these pollutants.

Eat local: Choosing foods produced nearby helps reduce the need for these products to be transported great distances, decreasing the need for fuel burning vehicles. 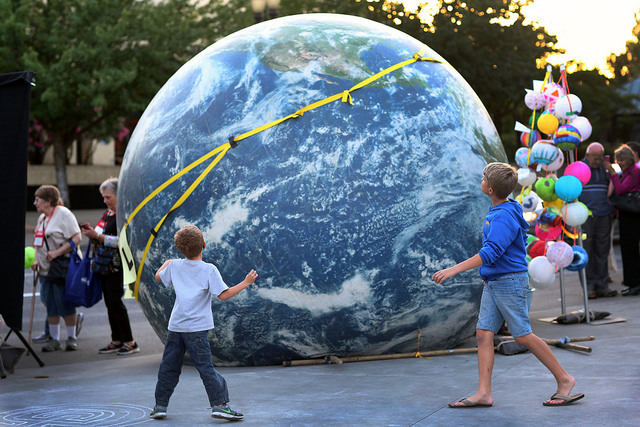 A climate change vigil held during the 2016 General Conference in Portland, Oregon, underscored our call to care for the Earth. Photo by Kathleen Barry, United Methodist Communications.

In 2009, our United Methodist bishops issued a statement on climate change called God’s Renewed Creation: Call to Hope and Action. The study guide is a great resource for church groups to use.

As you explore these statements and ministries, share what you are learning with your friends, church, and community.

Contact elected officials: Urge local, state, and federal officials to support clean energy initiatives, legislation to reduce emissions, and aid to those who are struggling to survive in our changing climate. That may include attending a rally, making a phone call, or sending an email or letter.

Ask your congregation: You may have ideas for ways your congregation could reduce their energy use. Donate energy efficient bulbs. Talk to the Trustees about investing in thermostats that help reduce energy consumption. Organize car pools to meetings and other events.

Become active in your community: Maybe you notice places where your child’s school, public spaces, or other community gathering places are wasting energy or producing emissions. Find ways that you can be part of the solution.

In Genesis 1, God entrusts the earth to the care of human beings—you and me. As followers of Jesus Christ, we have a responsibility to preserve, protect, and care for what God has created.

Despite Mark Twain’s comment, perhaps we can do something about the weather. By becoming better stewards of energy and speaking up for climate justice, United Methodists in industrialized countries can participate in the work of slowing and addressing the impacts of climate change.