The poinsettia: Jesus' life story in a plant

‘Tis the season when United Methodist sanctuaries around the world bloom into shades of red created by poinsettias, the most popular Christmas plant. With leaves shaped like the Star of Bethlehem, the poinsettia has been a decorative staple for decades. 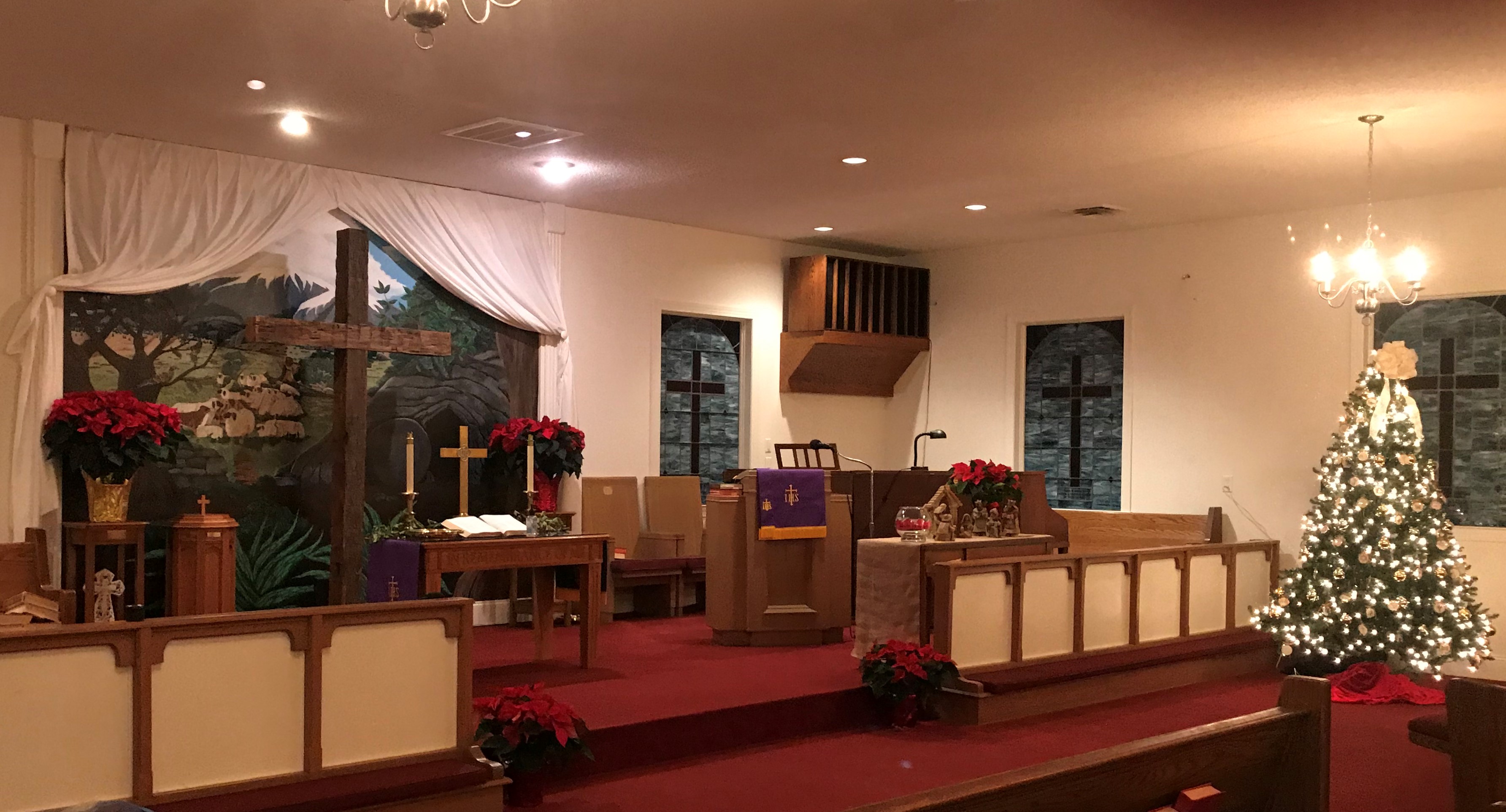 While most people associate the poinsettia with Christmas, what may get overlooked is how the poinsettia actually represents not only the birth of Jesus, but also Christ’s resurrection.

“I can’t imagine not having the poinsettias in the church,” said the Rev. Donna Friddle, senior pastor at Sandy Ridge and Northwood United Methodist churches in High Point, North Carolina. “The plants are a visible reminder for us of Christ’s birth and His death and the meaning behind those events.”

Symbolically, we have Jesus’ life story in one plant. The leaves symbolize the star that led the Wise Men to the newborn Jesus, the red leaves are a reminder of the blood of Christ shed during His crucifixion and the white leaves represent Christ’s purity.

When it comes to decorating, churches typically place poinsettias around the front of the altar, a location that also has significance.

“As we move forward to the cross, we move through this space that is decorated with poinsettias,” says the Rev. Patrick Lewis, senior pastor at Palisade and Fruita United Methodist churches in northwest Colorado. “We move through the birth of Christ to get to the cross.”

A beautiful legend
The history of the poinsettia is as colorful as its flowers, which are actually a special type of leaves known as bracts. Native to the southern Mexico region of Taxco del Alarcon, the earliest known facts about poinsettias indicate that ancient Aztecs used the leaves to make dyes for clothes and cosmetics and used the sap to treat fevers.

How the poinsettia and Christmas became linked centers around a bit of Mexican folklore involving a poor girl named Pepita. In the legend, Pepita had no present to offer baby Jesus at the Christmas Eve service. As she walked to church, she noticed weeds growing alongside the road. She gathered a bouquet of weeds (some accounts say she did this at the urging of an angel). When Pepita laid her bouquet at the feet of the Christ Child, the weeds burst into bright red flowers. From that night on, the poinsettia was known as “Flores de Noche Buena,” or “Flowers of the Holy Night.” 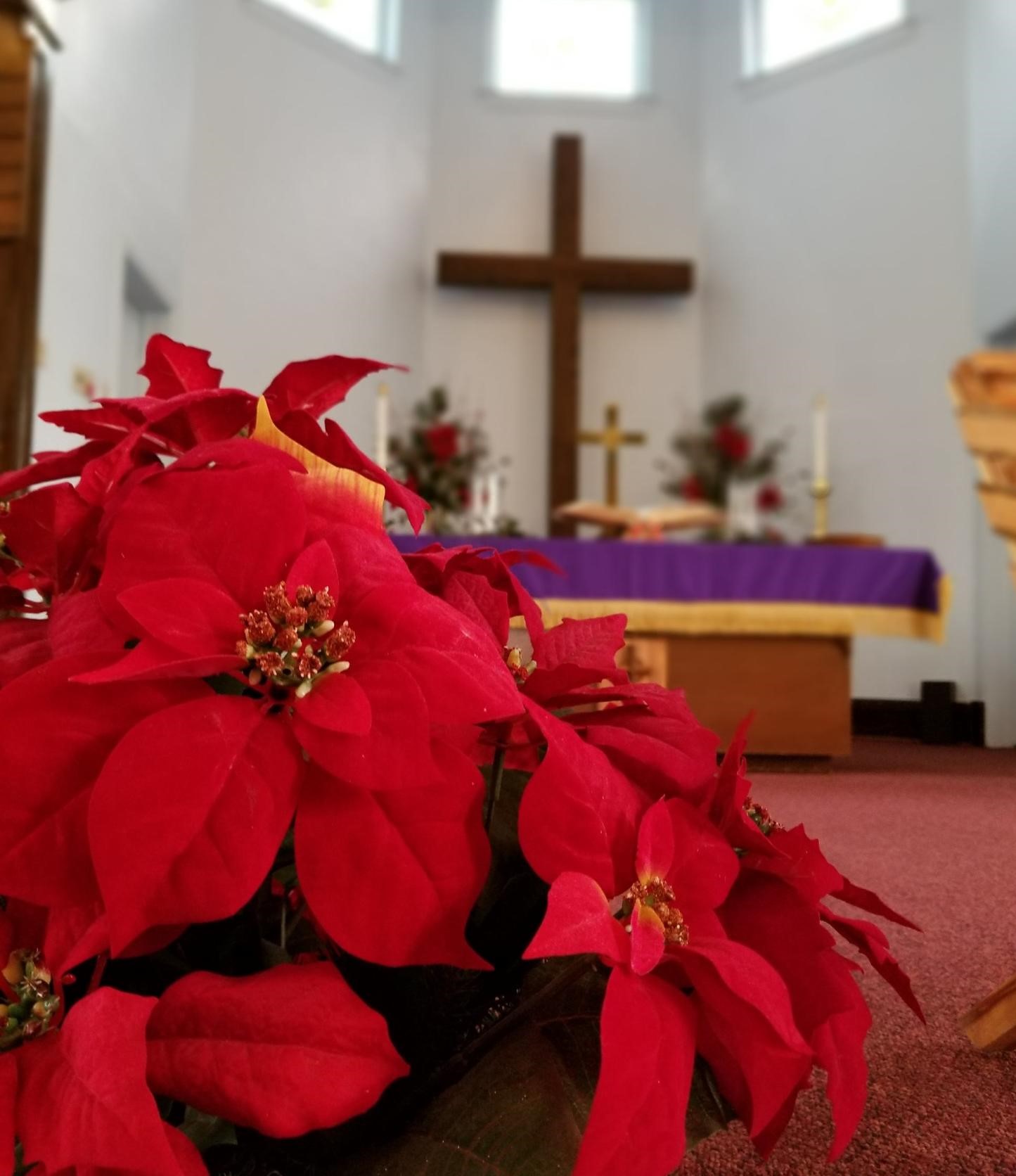 We must pass through the poinsettias - the symbol of Christ's birth - to get to the cross, says the Rev. Patrick Lewis of Palisade and Fruita United Methodist churches in Colorado. Photo by Patrick Lewis.

Fast forward from the time of the ancient Aztecs to 1828 when Joel Roberts Poinsett, the U.S. ambassador to Mexico, first visited the Taxco area of the nation. An amateur botanist, Poinsett sent samples back home to the United States of a plant he discovered that had red blooms. Less than a decade later, the poinsettia (named for Poinsett) was being grown in nurseries around the United States. Today, tens of millions of poinsettias are sold during the Christmas season.

A symbol of resurrection
Legend and history aside, the poinsettias most enduring quality may be of the memories evoked because of the tradition of placing them in churches to mark the Advent season.

“There is a legend behind the flower that involves a little Mexican girl,” says Peter Van Eys, senior pastor at Crievewood and Glendale United Methodist churches in Nashville, Tennessee.  “I would imagine that not as many people know that legend. What they do know is that flower had been in the sanctuary every year when they come for Christmas Eve service or Advent services. There’s a comfort level to the tradition and expectation.”

Lewis, now a pastor, fondly remembers his own family’s tradition with poinsettias. 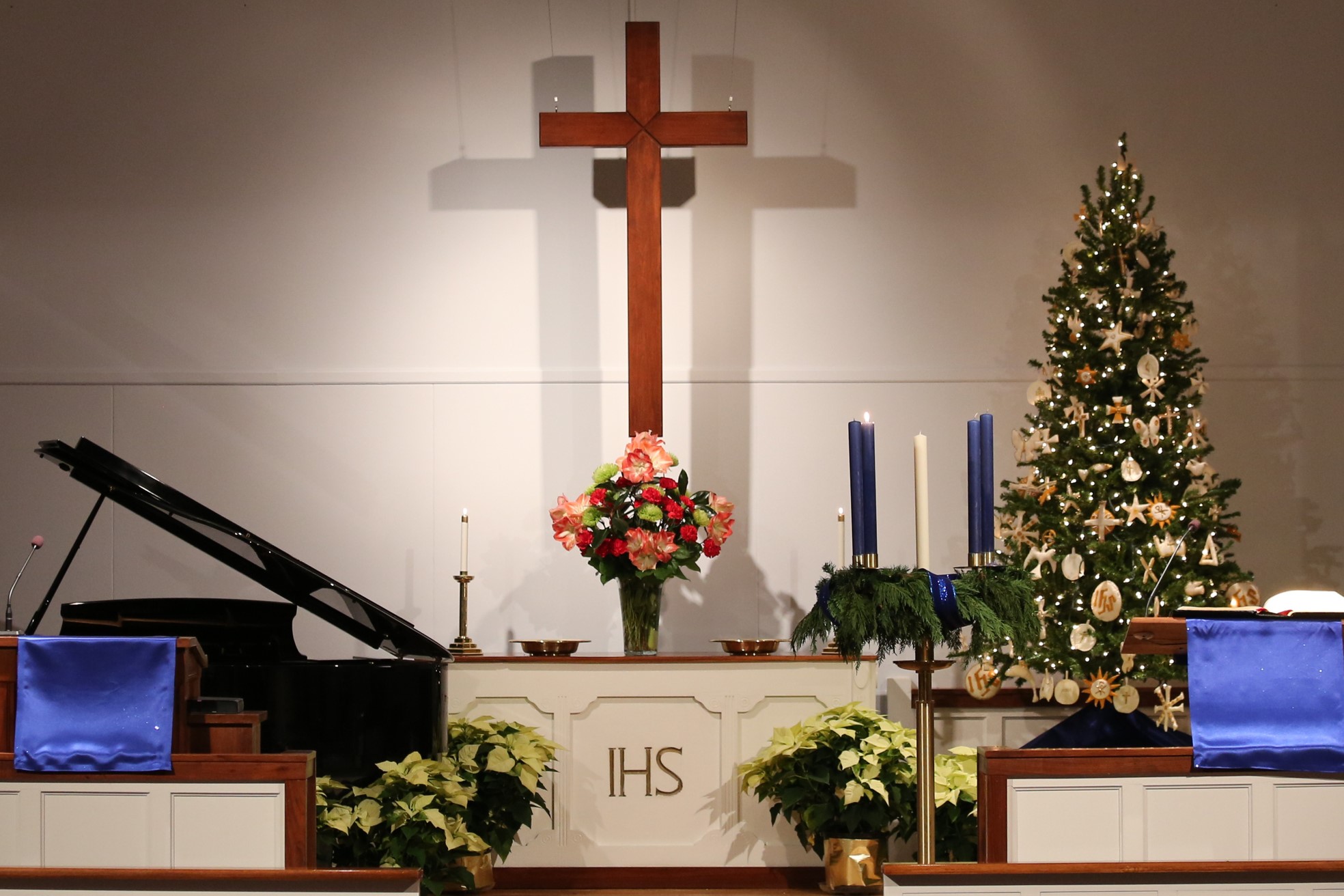 White poinsettias are used during Advent to decorate the sanctuary at Glendale United Methodist Church in Nashville, Tennessee. Photo by Steven Kyle Adair.

“Each year, we used to take them after the service on Christmas morning,” Lewis said, recalling his church in Wyoming. “We would take them home and try to kill them each year. And my mom would nurture them all summer long, then throw them in a closet in October. Early December, she would pull them back out and they would be this beautiful red plant.

“We don’t talk a lot about the resurrection story with the plant. You can regrow the plants every year, but it requires putting them away in a dark place. For me, the message is that no matter what happens to somebody, Christ is there.”

The message is an important one that Lewis says he works to remember each year.

Crystal Caviness works for UMC.org at United Methodist Communications. She can be reached via email or at 615-742-5138.