How sweet it is: United Methodists and bees

“I never feel more connected to the earth and to God than when I’m surrounded by a million venomous insects,” says United Methodist Jay Williams about his beekeeping avocation.

While Williams’ statement may surprise some people, he and other United Methodist apiarists say delving into the complex world of bees has deepened their faith.

“When you’re working with these little insects and they are doing all these things, you see all this wonderment,” shares Williams, Christ United Methodist Church member and founder of Williams Honey Farm. “It’s like a tap on the shoulder that says, ‘Hey, there’s more than you think. Celebrate it and tell as many people about it as you can.’”

The average honey bee weighs 3 grams; it takes approximately 3500 bees to weigh one pound. Recognizing the significant impact of something so small has influenced Tate Abbott’s faith.

“Even the simplest things, like when bees go out to pollinate flowers and doing chores, it’s little but that stuff matters,” says the 18-year-old college student. “Even if I’m doing simple acts of faith for God, it may be little but it can make a huge difference.”

“Every small creature is important …,” she explains. “Small things, such as bees, make a huge difference.”

Abbott, who is a wildlife biology major at Lees-McRae College, knew at a young age that she wanted to be a beekeeper.

She first asked for bees when she was 7, says her father, John Abbott, a request that Tate’s parents delayed fulfilling until their daughter’s tenth birthday. The Abbotts, members at Covenant United Methodist Church, now keep a few hives alongside their fruit trees and vegetable garden. 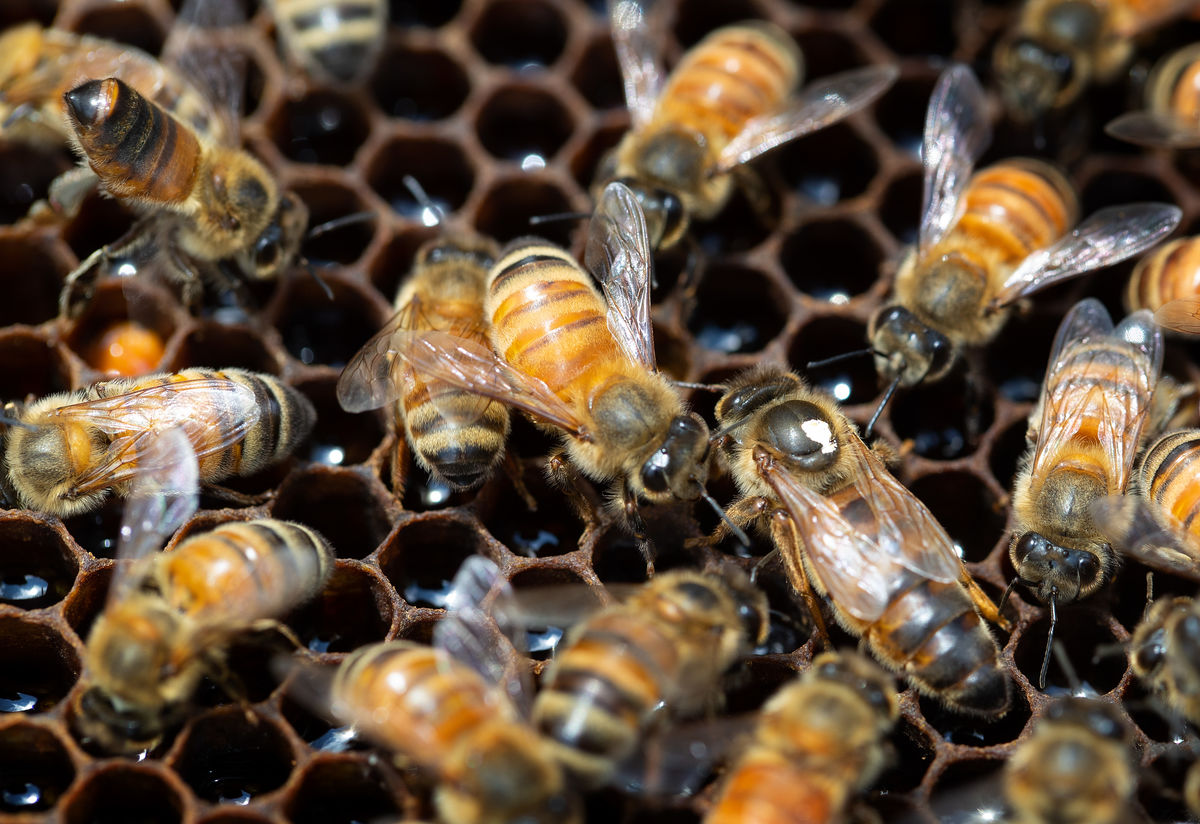 "The matrix that you have on that honeycomb is perfect. How is it that this insect produces something that perfect? There’s something going on there beyond the normal comprehension,” United Methodist John Abbott muses.

“I find that it’s so intriguing,” John Abbott says. “When you open up a hive, you have all of these bees. You start off with frames that have a thin film of wax and they extract that wax to turn into honeycomb. The matrix that you have on that honeycomb is perfect. How is it that this insect produces something that perfect? There’s something going on there beyond the normal comprehension,” he muses.

Kristen Bell grew up around bees. (Her 91-year-old father still keeps bees in Shelburne, Vermont.) When Bell and her husband, Steve, retired to Utah, the United Methodist couple decided being in the Beehive State was a good reason to get into the bee business, a pastime the Bells shared with their church.

Ten years later, Ogden First United Methodist Church boasts a bountiful community garden that flourishes through greater pollination by the church’s hives, an effort aided through training by the denomination’s EarthKeepers. The Ogden church’s outreach, which operates with a handful of dedicated volunteers, also partners with nearby schools to introduce beekeeping to students and organizes an annual honey sale that yields funds to support local and global missions.

“The bees are always teaching us something,” Kristen Bell says. “They are a community too. One honey bee cannot live by itself. I think it’s a great example of humankind. Every creature in the beehive is working for the success of that colony. I think God is telling us that we are to be doing the same thing.”

Because of bees, Bell says she’s learned more about creation care. She also has learned a drop of wisdom.

“’Kind words are like honey – sweet to the soul and healthy for the body,’” Bell quotes from Proverbs 16:24. “I love how this is reflexive. My kind words can build others up and, at the same time, keeps me in a positive mental state, which is so healthy for my body. And, of course, the prize of beekeeping, the wonderful honey crop, is what keeps us going!”

One of the missions supported by Ogden First United Methodist Church’s honey sales is the work of Mozart Adevu, a United Methodist missionary based in Accra, Ghana. Adevu is Africa’s regional coordinator for UMCOR’s Sustainable Agriculture and Development Program. For the past two decades, Adevu has introduced beekeeping to West African communities.

“Beekeeping has become a single highest source of income for most farmers and some have indicated that their annual incomes have increased more than ten-fold compared to the period prior to their involvement in beekeeping,” Adevu states.

“Bees have helped in tremendous ways to feed the poor and hungry in communities which I have served. The gospel message has been served well through providing food to the hungry and destitute through self-help,” he says, reinforcing the adage of teaching communities “how to fish rather than providing them with fish.”

“Beekeeping is a kind of divine stewardship of keeping the earth and God’s creatures,” shares Mark Price, Christ United Methodist Church’s pastor of congregational life. “We are in care of, not in charge of. You’re keeping bees safe and healthy so they can tend to themselves.”

“The health of the bees directly affects our food supply,” explains Bell, adding that one-third of the food we eat requires pollination.

“Their pollination is the benefit to nature,” Price explains. “Honey is our gift for helping them do the best they can at the place where they are.”

While United Methodist apiarists are abuzz about the virtues of bees, they know bees make others fearful. Therein lies a deeper significance, Williams shares.

“The lesson here is that what may seem scary from the outside – venomous, stinging insects – is quite beautiful and calm and therapeutic and serene. This will ground you and make you slow down and listen more than run from it,” Williams explains. “This is my version of faith.”