Do you know why we are called United Methodists?

There have been many nicknames for the band of believers who followed the lead of John and Charles Wesley in their early ministry in England: Enthusiasts, Sacramentarians, Bible Moths, Methodists. Their methods, values, and tradition laid the groundwork for what would become The United Methodist Church, 240 years after John and Charles Wesley began their Holy Club at college. 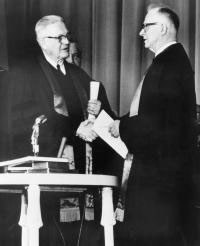 On April 23, 1968, Bishop Reuben H. Mueller, of The Evangelical United Brethren Church, and Bishop Lloyd C. Wicke, of The Methodist Church, joined hands at the General Conference in Dallas, Texas. They declared "Lord of the Church, we are united in Thee, in Thy Church and now in The United Methodist Church."

A new denomination was born and a new logo was created to represent this coming together. A traditional symbol—the cross—was linked with a single flame with dual tongues of fire. This ties The United Methodist Church to God through Christ (cross) and the Holy Spirit (flame).  Most church members know that the symbol is a sign that "this is a place where United Methodists gather." But not everyone recognizes how, and why, it is important to use the denomination's full name.

The moniker is a merger of the names of the mostly German Evangelical United Brethren Church and the Methodist Church. Not using the denomination's full name can feel hurtful to some members.

The Rev. Alfred T. Day, former head of the Archives and History agency, notes: "If your lineage to become a United Methodist today has been through the Methodist Episcopal strain, you're in the majority because the United Brethren and the Evangelical Associations by numbers are much smaller groups. So it's easy for you in the majority to think of yourself as Methodist and claim that heritage. But if you're from the minorityand then that small heritage is combined into the larger heritage--and the only way that you get to claim your name is the word 'United' and somebody drops that name off, that kind of leaves you without a name, that kind of forgets your history."

Another meaning of united in the name speaks to the fuller inclusion of black churches. Even though the Methodist Episcopal Church had re-united in 1939 after being divided on the issue of slavery, African American congregations were still segregated into a separate Central Jurisdiction. In 1968, that segregation ended.

Day explains, "The United name also represents a coming together of black Methodists and white Methodists in the same conference, with the same preachers, with the same bishops, as opposed to segregated conferences as well. So if you leave the name 'United' off you're leaving off both a significant piece and powerful part of the naming of who we are."

That newly formed United Methodist Church became one of the largest Protestant churches in the world with 12.4 million members today. And the cross and flame logo created in 1968 still represents that body, a body united in the goal to make disciples of Christ for the transformation of the world.