Sometimes, being with our neighbors is uncomfortable—and yet that can be beautiful.

I remember the first time I worshiped at a predominantly Black United Methodist Church. It was the summer after my freshman year and I got an internship where they placed us at different churches around the state. I’ll never forget that first Sunday on the job. I got to the church early, was greeted warmly as I walked in, and then was told to sit up front with the pastor. Me? But how will I know what to do?  Do I have to say anything? Won’t everyone be looking at me?

What makes a good neighbor?

1. Get to know the people around you: including organizations and groups.
2. Listen with humility.
3. Take up the work of striving for justice for those around you.

The first chords rang out from the organ and the choir emerged down the center aisle. Everyone was singing, but nobody seemed to be using hymnals. What have I gotten myself into?  Feeling frazzled, I tried to mouth along the words that I had heard in the background before but certainly couldn’t sing by heart. I was feeling discouraged, on the verge of tears, but then I felt a tap on my shoulder - a choir member slid me a copy of the African American Heritage Hymnal and whispered “#261, honey”. It was in that moment that I knew I wouldn’t leave that church the same.

That summer was one of the best summers I’ve experienced. I learned how to sit with discomfort, how to listen more than I speak, and how to learn from the leaders around me. That summer I realized for the first time that I could never fully understand the lived experiences of my Black and Brown siblings. But I got a glimpse of what the richness and fullness of the kin-dom of God looks like—especially when we don’t ignore race, but rather embrace it and celebrate the beauty of the diversity God created and called “good.”

It’s been years since that internship now, but when I walked through the streets of Atlanta protesting this week, I felt the same sort of connection. Most of the protests I’ve been to are non-religious, but there’s a certain essence that I can only explain as the breeze of the Holy Spirit encircling us as we march through the same streets Martin Luther King Jr. and so many other civil rights heroes marched through. We’re walking on holy ground when we do the work of resistance and justice seeking together - and it’s all about listening, following, and standing together. I believe Jesus would have marched in the streets with us.

I work on staff at Neighborhood Church, a church plant in in-town Atlanta that emerged out of a vital merger between two declining congregations. From our early days, we embraced the notion that it was important to be a church that strives to be pro-LGBTQIA+ folks and anti-racist. We quickly learned that this was more of a forever-long journey than an identity that can be posted on a banner. It means making decisions each week to ensure we are keeping on the path of seeking justice rather than doing what is cheapest, easiest, or the most celebrated. Justice seeking is embedded in our DNA at Neighborhood. 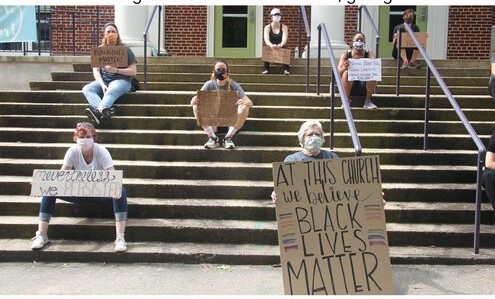 So, when the tragedies of the murders of Ahmaud Arbery, Breonna Taylor, and George Floyd hit, we already had some framework in place of how to do the work of anti-racism. Still, we started asking ourselves questions: what can we really do right now? Should we already have had book groups and conversation partners in place? Have we ignored this for too long? Can we catch up?

We quickly realized that rather than our voices simply being loud right now, they need to be intentionally placed. In some scenarios, that means keeping them completely silent to allow Black and Brown voices to be amplified and followed. In other situations, it means messaging neighbors for hours about resources and places to get started with the work of anti-racism. Sometimes it means literally shouting in the streets for miles demanding justice for our Black and Brown siblings.

We remembered back to the early days when we did hours and hours of community listening sessions and built relationships with community leaders. Those leaders came to us this week and asked the same questions: what can we do, together? So we listened again. We realized that this work of anti-racism continues to be a journey. We remembered that it’s important to engage in the on-the-ground work of justice during moments of crisis and also to build systems that are sustainable and aim to create long-term systemic change. So, right now our work involves both immediate action and calculating the best steps to take moving forward after the headlines are less energetic and we aren’t seeing protests daily as we drive to the grocery store.

We had one of our community members approach us with an idea about starting a solidarity fund that would support businesses affected by the violence that took place by a small number of protesters in downtown Atlanta the week after George Floyd’s murder. This will also support Black-led justice groups doing the work of activism and organizing around the city. We thought this would be a good way to streamline and redirect funds for folks who are looking to plug in and use their financial resources but aren’t sure where the best place to do so is. We have a team of board members plus a few other community members who are vetting where the money should be donated and re-distributing that money weekly. We raised just under $2000 in one day which showed us that people are actually looking to engage in this work and are stepping up and putting their money where their mouth is.

We also had people come to us who aren’t able to donate because of financial reasons but are hoping to use other gifts for the cause. For example, one of our community members owns a salon and will be giving free haircuts outside the church one Sunday morning in exchange for donations to the solidarity fund. I imagine other ideas like this will bubble up, as well. What a beautiful iteration of our gifts and talents all being used by God for the work of good in the world.

As people who are seeking to live the way Jesus lived, we need to constantly be open and looking for ways to shift and reshape our work in our neighborhoods. Part of this work is actually knowing our neighbors. So step one: if you don’t know the folks who live around you--the leaders of community organizations, the folks who live in the neighborhood across town who were pushed out by gentrification - go do that! Then step two: listen, learn, be humble, be willing to admit your mistakes, recognize that racism is embedded in the systems in which we interact on a daily basis. And step three: keep your foot on the gas. We are far from justice, and we are the people God calls to continue showing up day after day, week after week.

There is always more work to be done. There is always more shifting and learning - more stepping back, speaking up, and stepping back again. So our holy, yet challenging, work is to find a cycle of working hard, taking time to rest, centering ourselves, and then doing it all over again. The good news is we don’t do this work alone. We do it all together as the body of Christ who have vowed to resist evil, injustice, and oppression in whatever forms they present themselves.

There is work to do, friends. We hope you’ll join us. We’re so grateful to be your neighbor.

For more ideas on good neighboring, check out our Change the World topics page. 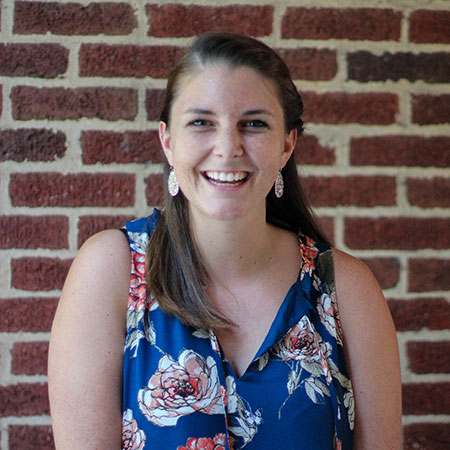 Michelle Hettmann (she/her/hers) loves hiking, coffee, spending time with family, and traveling to new places. She recently graduated from Candler School of Theology with her MDiv and is a certified candidate in the Virginia Conference on the path to become an ordained elder in The United Methodist Church. When she’s not at work, she loves catching up on shows on Netflix (Grey’s Anatomy, The Good Place, Friends, anyone?), testing new low-waste vegan recipes, and trying out new restaurants with friends.