Note: We used the New Revised Standard Version of the Bible in our quiz and in the answers below. For a list of available Bibles, visit Cokesbury. 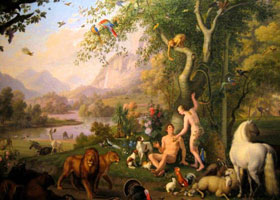 1. Who were Adam's children?
The correct answer is Cain, Abel, Seth and other sons and daughters. "When Adam had lived one hundred thirty years, he became the father of a son in his likeness, according to his image, and named him Seth. The days of Adam after he became the father of Seth were eight hundred years; and he had other sons and daughters. Thus all the days that Adam lived were nine hundred thirty years; and he died." (Genesis 5:3-5) 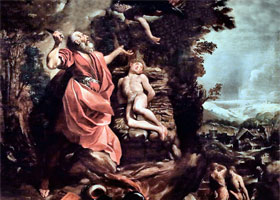 2. Which son of Abraham's name means "laughter"?
The correct answer is Isaac. "Sarah conceived and bore Abraham a son in his old age, at the time of which God had spoken to him. Abraham gave the name Isaac to his son whom Sarah bore him. And Abraham circumcised his son Isaac when he was eight days old, as God had commanded him. Abraham was a hundred years old when his son Isaac was born to him. Now Sarah said, 'God has brought laughter for me; everyone who hears will laugh with me.' And she said, 'Who would ever have said to Abraham that Sarah would nurse children? Yet I have borne him a son in his old age.'" (Genesis 21:2-7)

>> Read more about Abraham and other biblical fathers.
>> Rev. Adam Hamilton talks about the question "Is the Bible literal?" 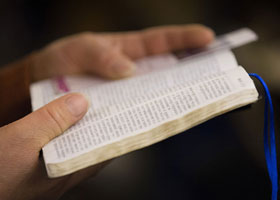 >> Read what the church says about the Bible.
>> Search for Bibles at Cokesbury. 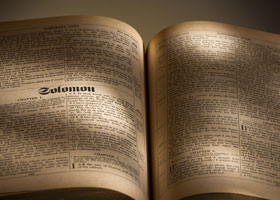 4. In a Protestant Bible, how many books are in the Old and New Testaments?
The correct answer is 66 books, 39 in the Old Testament and 27 in the New Testament. These books were written over a 1000-year period in three languages: Hebrew, Aramaic (the language Jesus spoke), and Greek. More than 100 million copies of the Bible are sold each year. 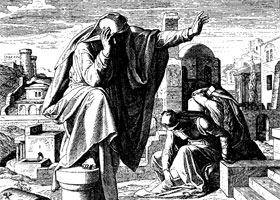 5. Which book of five poems was written in response to the capture and destruction of Judah?
The correct answer is Lamentations. "How lonely sits the city that once was full of people! How like a widow she has become, she that was great among the nations! She that was a princess among the provinces has become a vassal." (Lamentations 1:1)

>> Read how to turn to the Bible when sorrow strikes 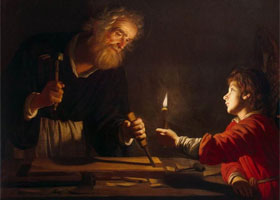 >> Read more about Joseph, a model of character, faith, and fatherhood 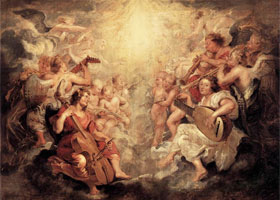 7. Which of the following words is used to describe a heavenly being in the Bible?
The correct answer is all of the above. The Bible uses all three words, in addition to "elders" in the Book of Revelation, to describe spiritual beings from heaven. The word angel comes from the Greek word aggelos (pronounced angelos), which means messenger. Some English translations of the Bible also translate malak, the Hebrew word for messenger, as angel when the malak is from God. Sharing a message from God is the primary role of angels in the scriptures.

>> Read more about angels, God's heavenly messengers for the world 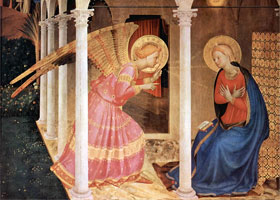 8. Which angel visited Mary in Nazareth?
The correct answer is Gabriel. "In the sixth month the angel Gabriel was sent by God to a town in Galilee called Nazareth, to a virgin engaged to a man whose name was Joseph, of the house of David. The virgin's name was Mary. And he came to her and said, 'Greetings, favored one! The Lord is with you.' But she was much perplexed by his words and pondered what sort of greeting this might be. The angel said to her, 'Do not be afraid, Mary, for you have found favor with God. And now, you will conceive in your womb and bear a son, and you will name him Jesus. He will be great, and will be called the Son of the Most High, and the Lord God will give to him the throne of his ancestor David. He will reign over the house of Jacob forever, and of his kingdom there will be no end.'" (Luke 1:26-33)

>> Read some words of wisdom from Mother Mary
>> Read more about Eve, Mary, and other biblical mothers. 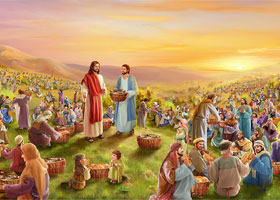 9. Which of these miracles is recorded in all four gospels?
The correct answer is Jesus feeds the multitude bread and fish. "One of his disciples, Andrew, Simon Peter's brother, said to him, 'There is a boy here who has five barley loaves and two fish. But what are they among so many people?' Jesus said, 'Make the people sit down.' Now there was a great deal of grass in the place; so they sat down, about five thousand in all." (John 6:8-10)

>> Do you believe in miracles?
>> Read what children think about miracles 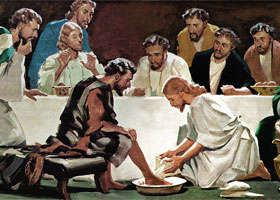 >> What is Maundy Thursday?
>> Read how to teach children about Holy Week

Note: We used the New Revised Standard Version of the Bible in our quiz and in the answers above. For a list of available Bibles, visit Cokesbury.