Angels among us: God's heavenly messengers for the world

"Every time a bell rings an angel gets his wings." Even if you haven't seen It's a Wonderful Life—and why haven't you?—you have probably heard this saying. But is it true?

At Christmastime, some set angels up with their nativity scenes, put angels at the the top of their Christmas trees, and dress young children as angels for the church Christmas pageant.

We call first responders angels, recognize those who volunteer at the homeless shelter as angels, and know that we shouldn't drive faster than our guardian angels can fly.

There is even a survey indicating that angels are #3 on a list of the most popular tattoos!

Clearly, we love angels. But what do we actually know about them?

Archangels Michael and Gabriel are among the best-known in scripture. Photo of 12th century icon at Saint Catherine's Monastery, Mount Sinai (Public domain), via Wikimedia Commons.

Angels in the Bible

The word angel comes from the Greek word aggelos (pronounced angelos), which means messenger. Some English translations of the Bible also translate malak, the Hebrew word for messenger, as angel when the malak is from God. Sharing a message from God is the primary role of angels in the scriptures.

In the Christmas story, for example, the angel Gabriel appears to Mary to tell her she will be the mother of Jesus. An unnamed angel comes to Joseph in dreams to guide him through Mary's pregnancy and the early days of Jesus' life. Another appears to Zechariah to tell him that Elizabeth will give birth to John the Baptist.

Then, on the night of Jesus' birth, an angel informs a group of shepherds that they can find the Christ child in a manger, followed by a large group of angels praising God.

Messengers from God announce other special births in the Bible. Three visitors tell Abraham and Sarah that Isaac will soon be born, and a messenger from God tells a woman she will soon be the mother of Samson.

In addition to making heavenly birth announcements, these messengers sometimes serve in other capacities. King Nebuchadnezzar says a messenger protected Shadrach, Meshach, and Abednego from being consumed in the fiery furnace, and Daniel tells the king that God sent a malak to keep him safe in the lions' pit.

God's messengers minister to Elijah when he is on the run and to Jesus when he is tempted in the desert. Jacob sees them ascending and descending on a ladder or staircase, and Balaam's donkey sees one that helps God get the prophet's attention.

Winged creatures—called seraphim—appear around the throne of God in Isaiah's vision, and assist in calling him into the ministry of prophecy. John reports in the book of Revelation that angels surround God's throne where they fall facedown and worship. 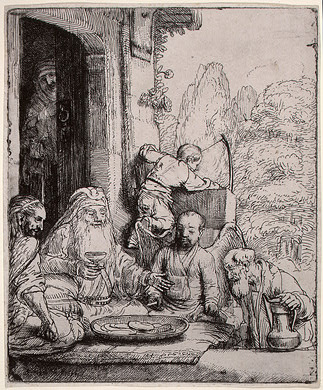 God's messengers visited Abraham and Sarah to tell them they would soon have Isaac. Photo of "Abraham Entertaining the Angels" by Rembrandt (Public domain), via Wikimedia Commons.

In the book of Acts, angels encourage the early followers of Jesus to begin their ministry, free Paul and others from prison, and facilitate meetings between believers and non-believers.

These and other encounters described in the Bible offer clues about the nature and function of angels, but questions remain.

John Wesley, founder of the Methodist movement, wrote three sermons on angels. Very early in his career, he preached a sermon called "On Guardian Angels" at St. Michael's in Oxford on the Feast of St. Michael and All Angels in September of 1726. Then in January 1783, more than 56 years later, he published two more sermons on angels. "Of Good Angels" and "Of Evil Angels" attempt to describe the work of angels and demons respectively.

In these sermons, Wesley refers to the biblical evidence and makes inferences about angels from those texts.

Albert Outler, noted Wesley scholar and editor of The Works of John Wesley, writes that Wesley's ideas are "unsurprisingly conventional." Wesley does not say anything notably different from the Anglican theology out of which he came (Works of John Wesley, Volume 3, pg 3).

Toward the end of "Of Good Angels," however, Wesley writes this:

we may imitate them in all holiness; suiting our lives to the prayer our Lord himself has taught us; labouring to do his will on earth, as angels do it in heaven.

While there is much we may never know of angels until we meet them, they serve as our example of how to live as citizens of the Kingdom of God today. We aspire to live as they live, "laboring to do [Jesus'] will on earth, as angels do in heaven."

Which brings us back to Clarence Odbody, Angel Second Class, who shows George Bailey how different things would be had he never been born. Clarence "earns his wings" by showing Bailey the positive influence he has had on the lives of his friends and neighbors; giving him hope when he feels hopeless. 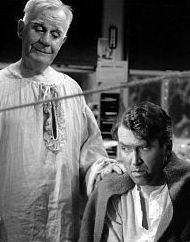 Frank Capra, the director of It's a Wonderful Life, never intended his depiction of Clarence to be biblically accurate. Alas, scripture does not support the idea that when a bell rings an angel gets wings. Wesley is clear in "On Good Angels," that angels are spiritual rather than physical beings, citing Hebrews 1:14.

Though he probably would not "trifle" away the time needed to watch a movie, Wesley may have seen some value in Clarence's story. Being a messenger of the love and grace of God to one who is struggling, is one of the roles of angels that we are to imitate.

While questions about angels persist, let us aspire to live into their example—living on earth as they do in heaven.