In a few weeks you’ll be eating turkey across the table from “Uncle Phil.” You know, the one from Enid, or Portland. For months, he’s waged political meme warfare on social media while jeeringly tagging you, doggedly planted campaign yard signs in public spaces all over town, repeatedly called you “misguided” for your contrary political views, and now, while passing the mashed potatoes and gravy, declares gratuitously, “I told you so.” 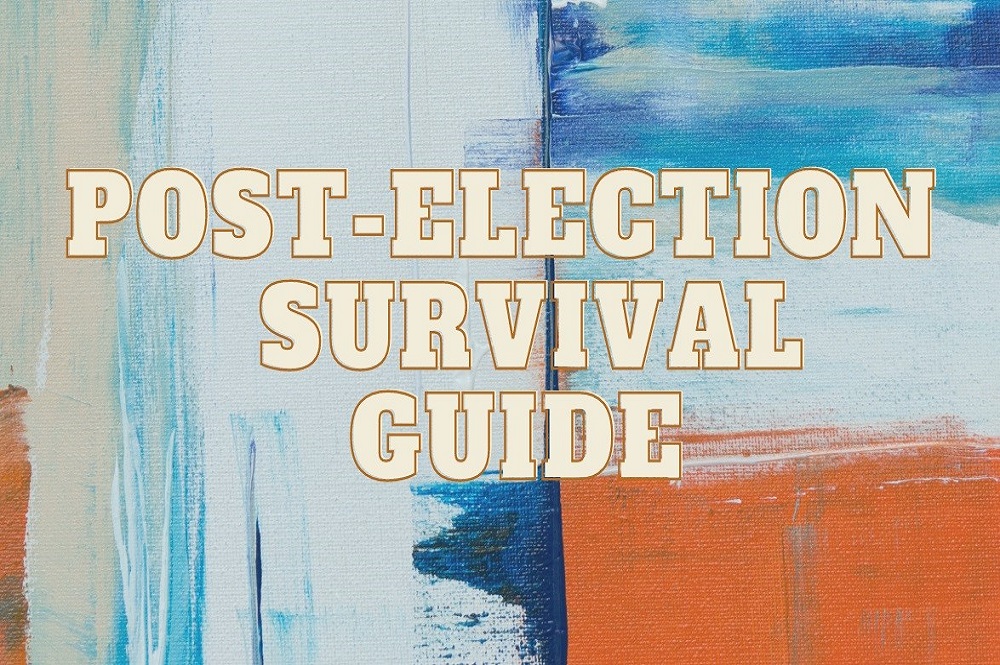 Welcome to Post-Election Family Feud: The Sequel. And the sequel is more brutal than the original.

Chances are you’re feeling disillusioned, disheartened and distressed by our current political climate and the ubiquitous divisions it has created in your personal relationships—what mental health professionals now call Post-Election Stress Disorder (PESD). Anxiety, anger, fear, and conflict fatigue are common symptoms of PESD. If any of them describe what you’re feeling right now, you’re not alone. Here are four keys to reclaiming your peace of mind and restoring peace in your relationships after the election.

It’s common to conflate the Kingdom of God with the pursuit of the common good, and to overinvest ultimate significance in what are actually penultimate, immanent concerns.

We may disagree with Uncle Phil over immigration policy or the Affordable Care Act, but remember that such disagreement is, in the end, merely a political disagreement, not a metaphysical one. For Christians, the penultimate is always adjudicated and refined by the ultimate, but it never becomes the ultimate. Assigning ultimate value and meaning to any political solution or agenda leads to a religious extremism that weaponizes faith, an idolatry that denies the sovereignty of God, and a “functional atheism” that believes that ultimate responsibility for everything rests entirely with this policy or that candidate.

Undoubtedly, there are matters that really are about the Kingdom of God and about which we should take a stand. Our baptismal vows obligate us to “to resist evil, injustice, and oppression in whatever forms they present themselves.” Dismantling systemic racism or stemming climate change, for example, are matters about which God is profoundly concerned. Even still, such work acknowledges its finite limitations and God’s infinite sovereignty.

In the post-election aftermath, keep things in perspective. As Jeremiah says, “Ah Lord God! It is you who made the heavens and the earth by your great power and by your outstretched arm! Nothing is too hard for you” (32:17). Or, as the wise farmer says, “God doesn’t settle all accounts in October.”

As with any election, there’s always a winning candidate and a losing candidate, one of whom may have campaigned on values and principles more closely aligned with your moral and religious framework. If your candidate lost in this election cycle, you may be feeling what psychologists call “moral injury:” the sense that your deeply held beliefs, convictions, or values have been betrayed or violated, or that the will of God has been subverted. Millions of years of human tribalistic thinking have taught us to project or transmit whatever disillusionment we are feeling onto others, like Uncle Phil—as though Uncle Phil represents everything that’s wrong with the world and must now be excluded from our “tribe.”

Leave some room in your tribe for Uncle Phil. Avoid binary thinking that categorizes people in terms of good/evil, light/dark, friends/enemies based on political preference. Remember the words of the late theologian, Walter Wink: “When we demonize our enemies, calling them names and identifying them with absolute evil, we deny that they have that of God within them which still makes transformation possible. We play God... We conclude that our enemy has drifted beyond the redemptive hand of God.”

Affirm that not all polarization is bad, and not every compromise is wrong.

Some issues merit healthy conflict; some solutions require conciliation. As political theologian, Luke Bretherton suggests, politics is a “dance between conflict and conciliation” as we negotiate our common life together. Democracy always thrives on the vigorous competition of opposing ideas, and Christian witness always demands a prophetic spirit that drives us to the margins.

The gospel is not politically neutral. It has something to say about our obligation to the poor, the immigrant, the oppressed, the sick, and the prisoner. Because of this, whenever Christians do politics, conflict is inevitable—but it doesn’t have to be insoluble or eternal. While most of us live in a fight or flight mode that either compels us to flee from conflict or to resist conciliation, Jesus builds a longer, wider table and invites tax collectors, zealots, soldiers and politicians, enemies, friends, and the friendless to be a part of a conversation that transcends social and political divisions by breaking bread together and sharing a cup.

The results of this election cycle will not heal the political polarization in our country. The dance between conflict and conciliation will continue, as it has for generations. If you want to join Christ in that daring dance, ask yourself: “How big is my table? Am I tough enough to be kind?” “Will I share my bread and pass the cup?”

Finally, practice the politics of compassion.

Politics is about more than how we vote or who we vote for. It’s more than systems, structures, policies, platforms, or party affiliation. The word “politics,” from the Greek, “polis,” means “affairs of the cities.” To do politics is to be concerned about the affairs of the communities in which we live, and to do politics as Christians is to ask, “What does the gospel of Jesus Christ say about how I should live in my community. What is my responsibility to the people with whom I share the sidewalk?”

This is a politics of compassion, and it transcends “issue politics” by calling us to consider what kind of community we want to live in and what kind of neighbors we want to be. We cannot answer those questions by simply voting because, in the end, Jesus will still ask us, “When I was hungry, thirsty, sick and in prison, did you care for me? When I was your neighbor in disguise, did you love me?” This is the only kind of politics that matters to Jesus.

With the election now behind us, step away from the cable news talking heads and the social media echo chamber, and serve the real human needs of your community. Feed the hungry, march for racial justice, visit the imprisoned, care for the sick.

And bring Uncle Phil with you.

*The Rev. Mark Feldmeir is Lead Pastor at St. Andrew United Methodist Church in Highlands Ranch, Colorado, and the author of A House Divided: Engaging the Issues through the Politics of Compassion. Hear him on our podcast, Get Your Spirit in Shape.