Directors of Global Ministries approved grants for the Yambasu Agriculture Initiative (Advance #982188) for annual conferences in Sierra Leone, Liberia, Zimbabwe and the Democratic Republic of the Congo during their October 2021 board meeting. Grants ranging from $166,000 to $265,000, for a combined total of $1.34 million, will support the episcopal areas as they establish new agricultural projects, including crop and livestock farming on church-owned land.

In spring of 2020, Global Ministries established an agriculture initiative for Africa, responding in part to the urging of the vice president of Global Ministries at that time, Bishop John K. Yambasu. Sadly, in August 2020, Bishop Yambasu died suddenly in a car accident outside Freetown, Sierra Leone. The board of directors honored the bishop by naming the agriculture initiative after him. Directors approved the first grant for Sierra Leone last year and continue that support into a second phase with a second grant. 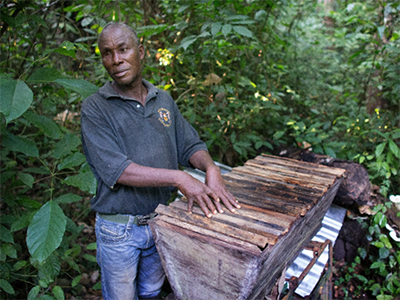 The Liberia UMC will establish farmer groups who will learn skills like beekeeping. This hive, built and maintained by the Rev. Joe Gatei in Ganta, Liberia, has long supplemented the pastor’s income. Photo: Mike DuBose, UMNS.

The first phase of Sierra Leone’s project has been completed, with cultivation of 140 acres of rice, seven acres of vegetables and the installation of a piggery enterprise. By establishing farmer groups at several locations, 2,520 persons across 360 households benefited in this first phase of the project.

The Zimbabwe Episcopal Area received grants to develop farms in both its annual conferences. In both areas, increased agriculture production, chicken raising and training for farmers with small holdings in more resilient, climate-smart farming practices will increase the income of church-owned farms and contribute to the financial sustainability of the church and its programs.

The Liberia Episcopal Area plans to strengthen the capacity of rural communities to increase productivity, improve food security and generate income – resulting in poverty reduction, sustainability, self-sufficiency, economic growth, and development for both the community and the conference. 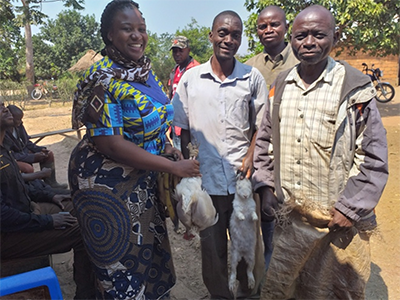 Lorraine Charinda (left), the missionary agriculturist with Kamisamba farm in Kamina, North Katanga, DRC, will often receive gifts of produce from farmers when she is conducting workshops in the communities. Farmers who received skills, knowledge and start-up supplies at the demonstration farm find tangible ways to say thank you. Photo: Courtesy of Lorraine Charinda.

In 2022, the Yambasu Agriculture Initiative plans to increase the ability of episcopal areas and annual conferences to build on current sources of revenue and to seek and manage funding from other donors or investors.

excerpt from a story by Christie R. House, consultant writer and editor with Global Ministries and UMCOR.