Because of UMCOR relief funds, volunteers for the Okanogan Long Term Recovery Group are about to rebuild their eighth and final house destroyed by 2020 wildfires – more houses than the team originally projected they would be able to fund also in a much shorter timeline.

“It was the UMCOR money and volunteers that got the ball rolling,” said Dana Bryson, co-coordinator of disaster response in the Pacific Northwest Conference. 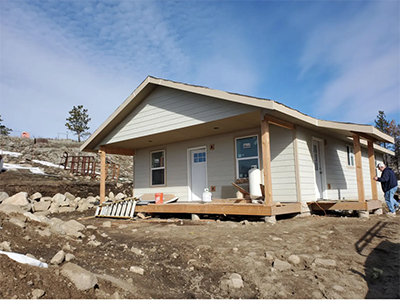 The outside of one home being rebuilt in northcentral Washington after 2020 wildfires. Courtesy Photo: GBGM.

Bryson has been partnering with the Okanogan Long Term Recovery Group to seek out financial resources, volunteers, case managers and more to help with the recovery and rebuilding efforts after fires swept through northcentral Washington in September 2020.

After applying for and receiving a UMCOR solidarity grant of $10,000 in the immediate aftermath of the blaze, Bryson sought out an additional $100,00 and then another $250,000 grant from UMCOR to help with recovery.

The money provided for case management, construction materials and more, but it also opened up more volunteers and resources. The Okanogan Long Term Recovery Group (LTRG) was then able to secure $500,000 from the American Red Cross, Mennonite Disaster Services chipped in, and other ecumenical partners joined the effort.

Bryson is also quick to credit the Okanogan Long Term Recovery Group’s organized efforts for making the rebuilding process as smooth as a disaster response rebuilding project can be.

After vetting potential projects, they could tackle and assess finances, Bryson said the Okanogan LTRG projected they could rebuild five to six houses by 2023. It is early in 2022 and the eighth house is about to be under construction.

“The Okanogan Long Term Recovery Group is a great group of people,” said Bryson. “They have experience – unfortunately.”

“We got started really early because of established relationships,” Bryson said.

John Melvin of Fairway Community United Methodist Church outside of Seattle had joined the initial Okanogan Long Term Recovery Group re-building process as an Early Response Team member back in 2015.

“The case manager called me and said, ‘hey, do you want to get the band back together?’” Melvin recalled in the early stages of 2020 wildfire recovery.

Melvin said his church has been actively involved in homeless ministries for years, so when he saw the opportunity to swing a hammer and help people thrive one home at a time, he knew he’d found his niche.

Now that he is retired, Melvin spends as much time as he can on rebuild projects, and in the Okanogan area that’s meant at least seven trips to help build walls in the last six months – often collaborating with the homeowners who are trying to rebuild their homes and their lives.

“I had a great conversation with one of the homeowners,” he said. “I learned a lot about them.”