UMC Support Investigation of Abuses in the Philippines

United Methodists are adding their voices to a renewed call for an independent investigation by the United Nations and international community of human rights violations in the Philippines.

Three reports by INVESTIGATE PH undergird the United Methodist support and longstanding commitments to the Filipino people and Indigenous communities in the Philippines, said the Rev. Dr. Susan Henry-Crowe, general secretary of the General Board of Church and Society of The United Methodist Church.

The National Association of Filipino American United Methodists (NAFAUM) — representing Filipino congregations and ministries throughout the U.S. and Canada — also has endorsed the work of INVESTIGATE PH.

Henry-Crowe was one of 10 commissioners for INVESTIGATE PH who took part in four online hearings in July and August of 2021. She said she heard dozens of disturbing stories from religious leaders, educators, lawyers and young people about the actions of the government led by Philippine President Rodrigo Duterte. 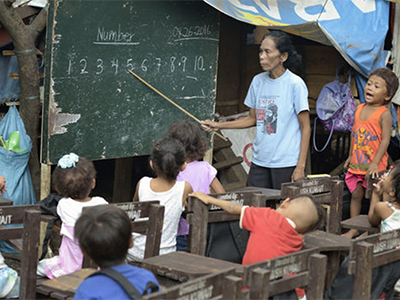 Indigenous children displaced by paramilitary violence attend school in a makeshift classroom in a church compound in Davao in 2016, on the southern Philippine island of Mindanao. Hundreds of Indigenous were living in the church center, afraid to return home. Photo © Paul Jeffrey, Life on Earth Pictures.

Churches and religious groups who advocate for the poor and Indigenous peoples are among those who have been directly attacked, Henry-Crowe said. The Indigenous groups being persecuted include the Lumads, some of whom are United Methodist.

From southern Philippines, the Lumads have been caught in the middle of combat between government soldiers and armed rebels. In the fall of 2020, for example, 26 Lumad families who were members of Beho Omor United Methodist Church, were among 58 families forced to flee their homes and seek shelter at an evacuation site because of the fighting.

The Philippine government has closed some 215 Lumad schools, affecting the education of 10,000 students, Henry-Crowe said.

“President Duterte’s ‘whole of nation’ strategy against critics — in the name of stopping communist armed conflict — has involved attacks on the education system and teachers, which is evident in the ongoing closure of Lumad schools, including occupation of schools, arrest of children and attacks on teachers and universities by state authorities,” she said.

The National Council of Churches in the Philippines, in which United Methodists play an active role, partnered with Rise Up for Life and for Rights online in October for ab oral statement to the U.N. Human Rights Council. The statement was presented through the World Council of Churches during the regular debate segment of the ongoing 48th regular session of the Human Rights Council.

Rise Up disputed Duterte’s claims to the U.N. about his government’s accountability on the issue of civil rights and echoed the call that the Council conduct “an independent investigation into the widespread and systematic killings and other human rights violations in the Philippines.”

The final report declared that the suffering of people in the Philippines under the policies of President Duterte, who took office in July 2016, are worse than that of the Marcos dictatorship.

It is important to continue to speak out against the current human rights violations in the Philippines, Henry-Crowe said.

excerpt from a story by Linda Bloom, interim communications director, General Board of Church and Society.