The UMC: A Church of Many Languages

As a global denomination, The United Methodist Church includes people who speak many different languages. For example, of the more than 12 million United Methodists worldwide, 4.5 million speak French and 400,000 are Portuguese-speaking. 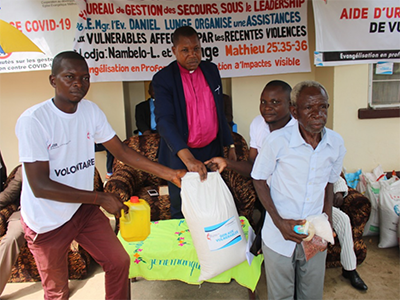 The Bishop Daniel Lunge assisted by UMCOR volunteers including Armand Osango and Placide gave the bag of rice to Papa Jean Okito, one of the victims. The Church brought food to displaced people who fled clashes between two communities following a forest conflict. Photo by Francois Omanyondo, UM News.

United Methodist News also produces content for the church's diverse language groups, with separate portals for English, French, Korean, Portuguese and Spanish. UM News produced 800 pieces of content in these languages in 2021. The Ask The UMC ministry also produced FAQ articles that were prominently featured on all five portals, addressing topics as diverse as baptism, life after death and how to help when a disaster strikes.” 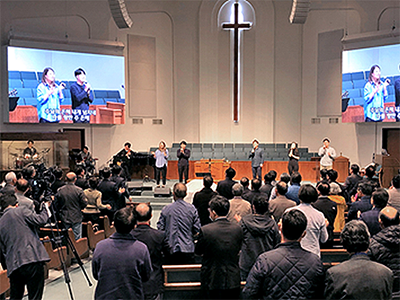 “The Korean UM News shares stories not only from the Korean community, but also translated English stories to bridge and connect Korean audiences and the entire denomination through news, commentaries and Ask the UMC,” states Thomas Kim, director of Korean/Asian News.

Additionally, e-newsletters are produced in Spanish, Portuguese and Korean. The UMComtigo e-newsletter provides news, resources and other information in both Spanish and Portuguese. Likewise, the Duru Allimi e-newsletter offers news and resources for leaders in Korean.

A Spanish-language version of ResourceUMC.org, a site for United Methodist leaders, features content from across the denomination's agencies and entities to share Spanish-language materials on one platform.

Highlighting Ministry Tracks resources designed to communicate multiple accreditation processes for leaders, Aileen Jimenez, Senior Manager of Hispanic/Latino Leader Communications, praised the spirit of collaboration among agencies that has emerged from creating content in Spanish. ResourceUMC is not only producing original content in Spanish but "creating a virtual space 'at the table' for aggregated content in different languages so that they are easily accessible," said Jimenez. 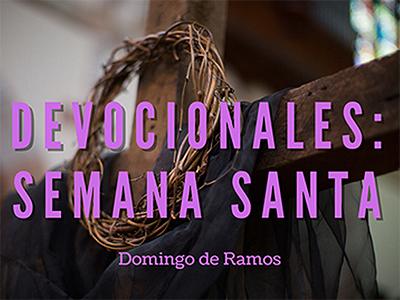 As for social media, the content is targeted for the audiences speaking the various languages also: Korean Church; La Iglesia Metodista Unida/ Servicio Metodista Unido de Noticias; L'Eglise Méthodiste Unie and Recursos Metodistas Unidos. Generación in Between is a social space on Facebook and Instagram specifically created for Hispanic/Latino seekers who straddle between their Latin American heritage and their American identity and culture. This content is provided in English, Spanish, and "Spanglish." Occasionally content is shared in Portuguese for the Brazilian audience in the U.S.