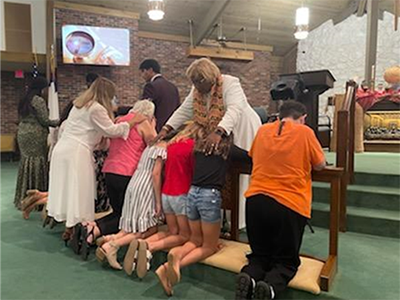 The different campus pastors prayed over those who came to the altar. Courtesy photo.

On Sunday, October 3, 2021, Wesley Memorial United Methodist Church of Fort Myers celebrated World Communion Sunday by showcasing the languages and cultures of all four congregations who share its campus.

“This is what the Church should look like every Sunday,” said Rev. Dr. Debbie Daley-Salinger. 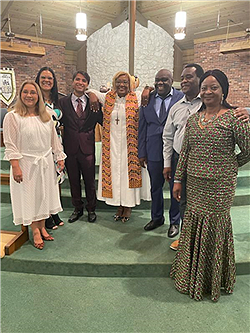 All the campus pastors pose for picture. Courtesy photo.

“Isn’t it amazing,” Lorna Pierre   said, before she led the congregation into “Because He Lives.” “Different colors, Different nationalities, all coming together, for the LOVE of Christ!”

The worship selections were as diverse as the congregants. Music selections ranged from English-language classic “That Old Rugged Cross,” to “Siyahamba,” an African hymn, the title of which means “We Are Marching.”

As Sarah Markle Wesley Memorial’s Liturgist said during the Prayer of Illumination, “Today was a reminder that no matter where we live, what beautiful language we speak, we all worship the same God.”