World travelers may seek out pyramids, cathedrals and safari parks, but United Methodists have destinations across the globe that hold their own allure. Here are suggestions for seven fascinating places to visit. 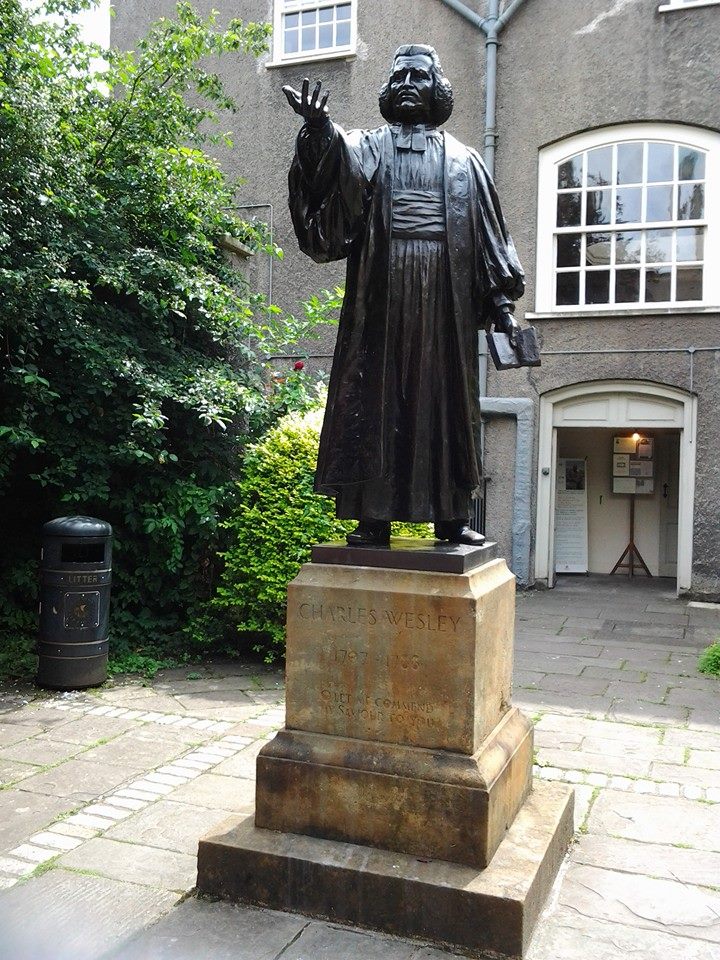 Methodism's first building, "the New Room," was used by John and Charles Wesley, and others, as a meeting and preaching place, and a center for educating people in need. It is located in Bristol, England. This photo shows a statue of Charles Wesley standing near the building. Photo by Victoria Rebeck.

England is the cradle of Methodism, where John Wesley started the worldwide evangelical movement in the 18th century, and where travelers today can visit three main sites that trace the steps of the socially minded Anglican minister. In Bristol, where Wesley preached his first outdoor sermon, the New Room stands as Methodism's first building, used by Wesley and other early Methodists as a meeting and preaching place and a center for helping and educating people in need. "[The New Room] is soaked in prayer. It's a great thrill to stand in the pulpit," says Jo Hibbard, heritage officer for the Methodist Church in Britain.  London is home to Wesley's Chapel and House, the hub for Wesley's later work and considered the Mother Church of World Methodism. To explore where Wesley grew up, take the three-hour train ride from London to Epworth to tour the childhood home of John and his hymn-writing brother Charles. Here, their revered mother, Susanna, instilled in her large brood of children the methodical manner that later would characterize her sons' approach to religion. 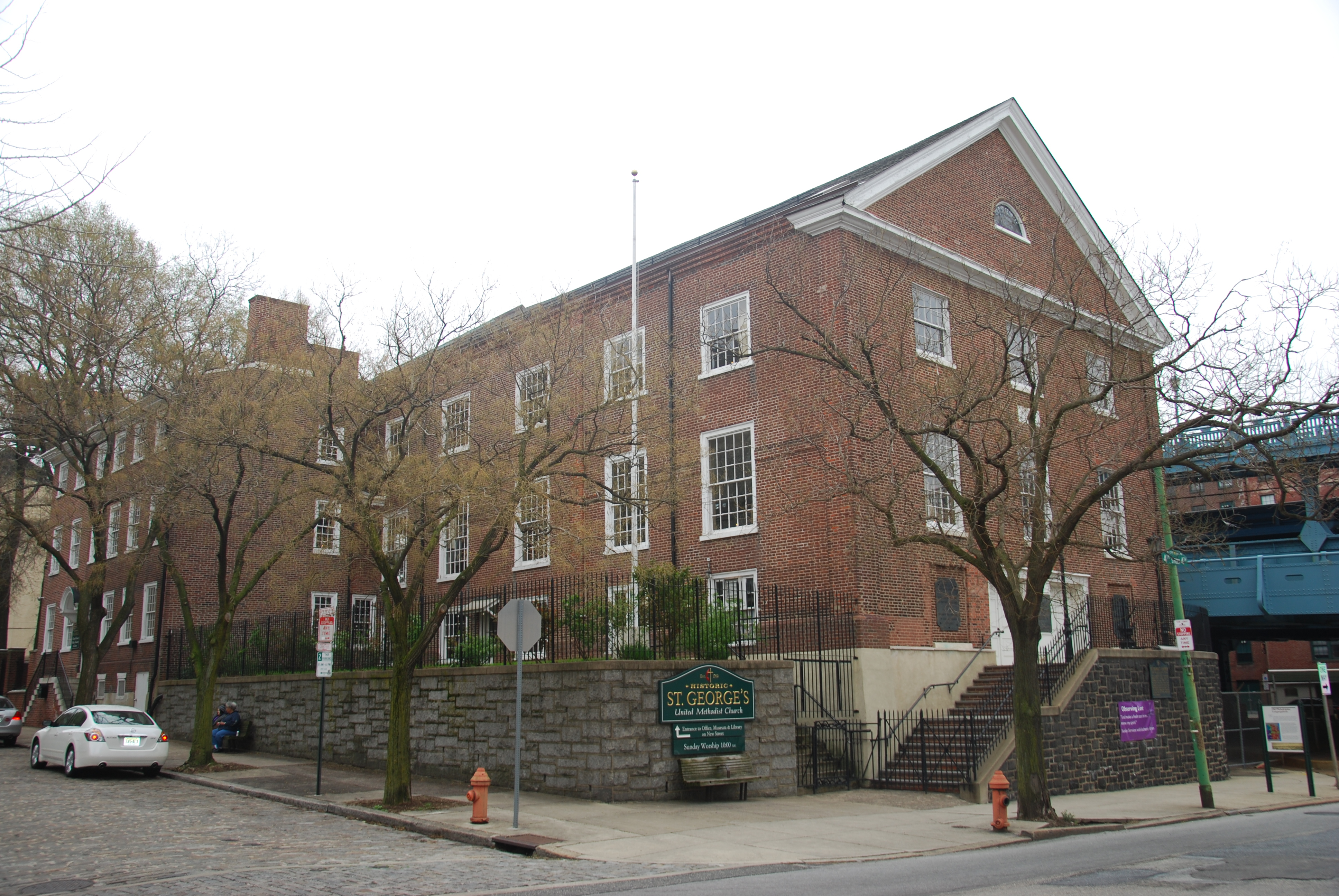 The oldest house of Methodist worship in continuous use in America, St. George's United Methodist Church of Philadelphia houses an active congregation that began as a Methodist society in 1767 and has occupied the historic church building since 1769. The congregation went to court during the 1920s to save the structure from being razed to make room for the Ben Franklin Bridge. The site of many firsts, St. George's is where missionary Joseph Pilmore made the first public statement on Methodist principles and beliefs and held the nation's first Methodist prayer meeting. Francis Asbury, the pioneering bishop of American Methodism, preached his first American sermon at St. George's in 1771 and called the place The Cathedral Church of American Methodism.  Want to learn more about those early days? St. George's offers a Time Traveler's tour on certain dates. 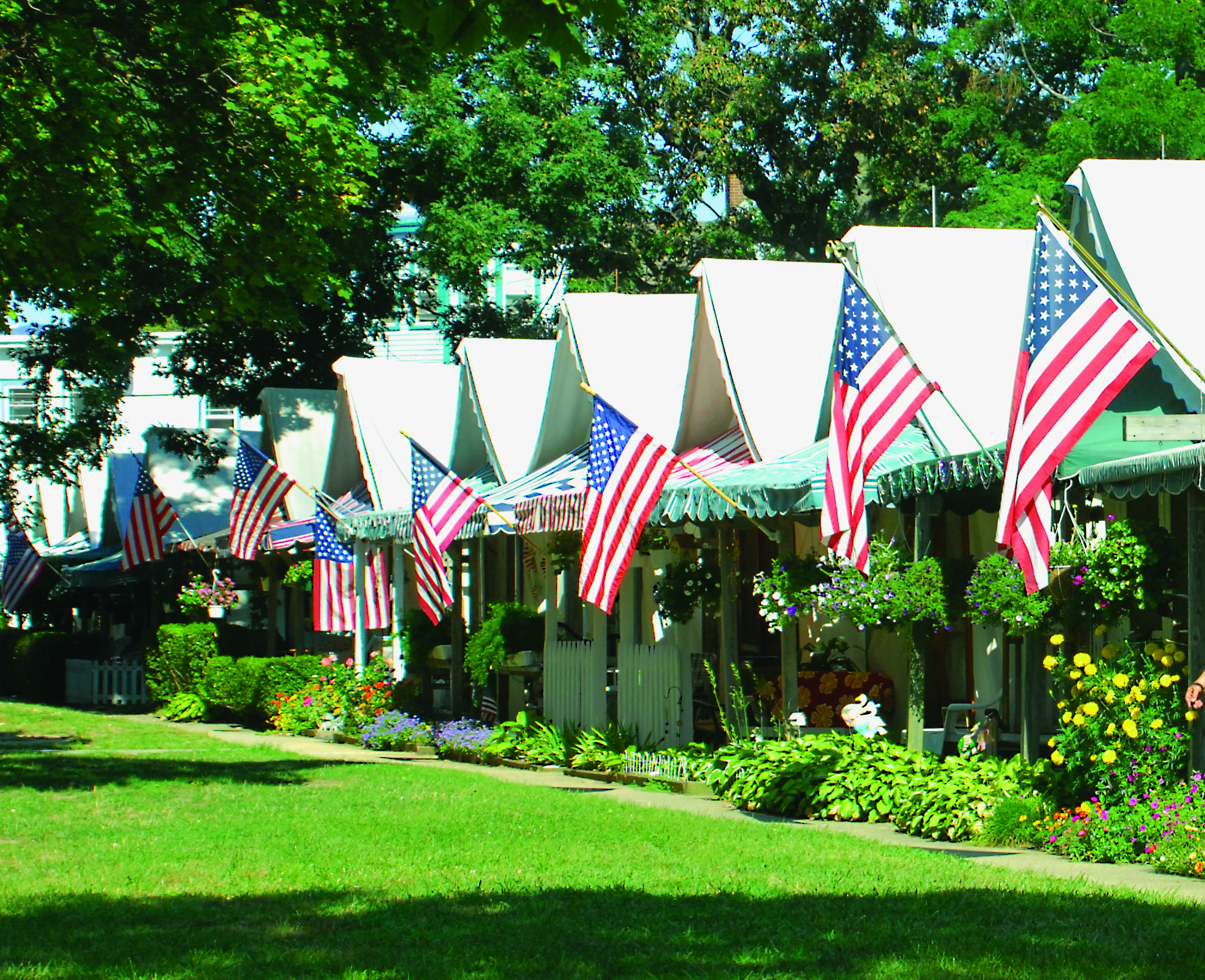 Each spring, 114 tents are erected and leased to summer residents of Ocean Grove, N.J., a seaside community founded by Methodists in 1869 as a camp meeting site.  Photo by Tracey James.

The embodiment of Methodist camp meetings and the Holiness Movement of the late 19th century, Ocean Grove, N.J., was founded in 1869 during a prayer meeting on land set aside for the perpetual worship of Jesus Christ. Today, the seaside community still offers residents and visitors opportunities for spiritual birth, growth and renewal in a Christian recreational setting. Ocean Grove (pop. 3,342) holds a camp meeting revival every Sunday, closes its beaches to the public on Sunday mornings, features streets with Biblical names, sells no alcohol, and maintains a commercial-free boardwalk along one of the most pristine beaches in America. At its center is the 6,000-seat Great Auditorium, used for regular worship services and family-friendly concerts and featuring an 11,000-pipe organ. Each spring, 114 canvas tents are erected around the auditorium and rented to tenants, many of whom are fourth- and fifth-generation summer residents. "There's a peaceful spirit here. It's like stepping back in time," says J.P. Gradone, executive director of the Ocean Grove Camp Meeting Association, the United Methodist-related group overseeing the grounds.

Witness to the World 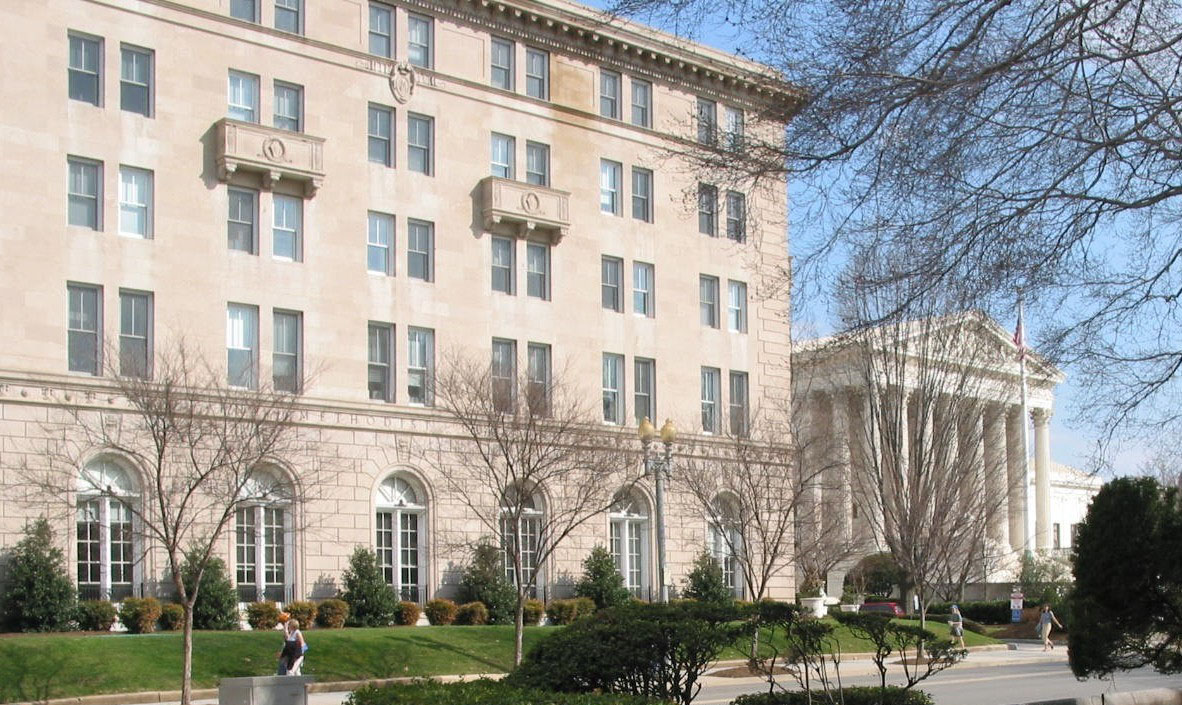 Dedicated in 1924, the United Methodist Building (left) is the only non-governmental building on Capitol Hill in Washington D.C. Photo courtesy of the Board of Church and Society.

Dedicated in 1924 in the heart of Washington, D.C., the United Methodist Building is the only non-governmental building on Capitol Hill — giving public witness at the seat of U.S. government that The United Methodist Church is an advocate for justice and peace throughout the world. Located across from the Capitol and next to the Supreme Court, the Italian Renaissance-style building houses offices for several United Methodist agencies and numerous other church and ecumenical groups. Filled with rich history, the structure was dedicated amid the Temperance Movement and the Labor Reform/Social Gospel Movement. Weekday visitors can take a self-guided tour (or arrange in advance for guided tours) and attend noon worship services each Wednesday in Simpson Memorial Chapel.

A gem of tranquility in a bustling district of Nashville, Tenn., Upper Room Chapel is a place of prayer and reflection, as well as the anchor of a spiritual formation ministry that since 1935 has distributed millions of copies of its flagship devotional guide to 100 countries in 35 languages. The campus includes a prayer room, a Christian art museum and the home of global United Methodist ministries focused on spiritual development. It has become a pilgrimage destination for thousands of people who have learned about God and grown their faith through the quarterly grassroots-written publication called The Upper Room. The chapel holds a worship service each Wednesday morning, and the art museum features rotating exhibits. Admission is free, although donations are welcome. 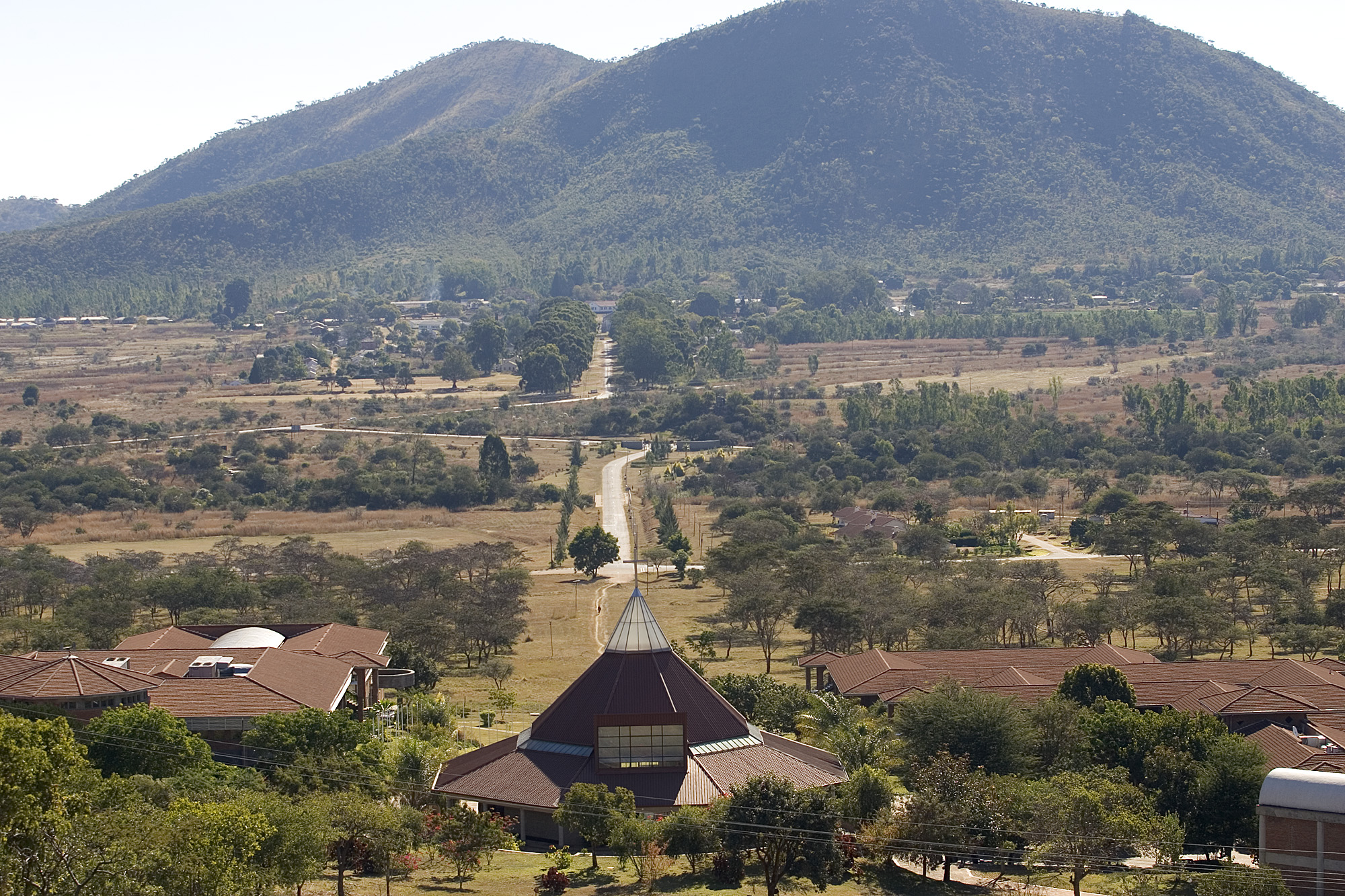 In the midst of a United Methodist evangelistic movement on the world's second most populous continent, Africa University stands as a beacon of hope to the people of Africa's underdeveloped nations. The United Methodist-related school opened in 1992 in Mutare, Zimbabwe, near a mission site established a century earlier by the Methodist Episcopal Church, where a founding bishop envisioned that youths holding books one day would walk in the valley. Today, the vision at Old Mutare Mission is being fulfilled as the university molds thousands of students from dozens of African nations into educated, principled Christian leaders. 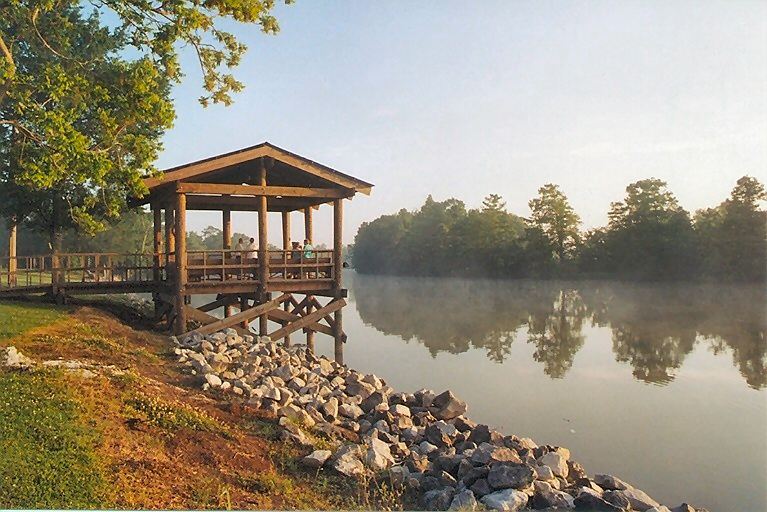 This pier on Bayou Teche in Louisiana is part of the Sager Brown Depot. Located in Baldwin, the depot ships $7 million worth of supplies and relief kits throughout the world for the United Methodist Committee on Relief. Photo by United Methodist News Service.

If you want to see where ministry and mission converge, the bayou country of Louisiana is the home of the primary U.S. depot for the United Methodist Committee on Relief, where 2,600 volunteers pass through annually to process and ship $7 million worth of supplies and relief kits distributed throughout the world. Located in Baldwin, 90 miles from New Orleans' strategic seaport, Sager Brown Depot has been a hub of UMCOR missions since Hurricane Andrew hit the Gulf Coast in 1992. For more than a century prior, however, the campus served as a Methodist school and home for black children orphaned by the Civil War. Tours of a small museum and the depot are available by appointment. "We're a hands-on place," explains executive director Kathy Kraiza. "A lot of hands touch these relief kits by the time they end up in the hands of somebody in a Third World country or in the midst of disaster." Kraiza suggests visiting between November and April when sticky bayou temperatures subside.

Curiosity piqued? We only shared seven suggestions but you can see more heritage landmarks of The United Methodist Church, with notes from the Commission on Archives and History.

Read about other fan favorites.

*Marta Aldrich is freelance writer from Franklin,Tenn.  This story was first published on July 31, 2014.