Pilgrimage: Journey to the renewal of the soul

“Walking with God is wonderful,” says Gillian Kingston pensively as she shares about her many experiences of going by foot along the Santiago de Compostela in Spain, times when she recalls taking in the wonders of creation, praying and feeling close to God.

Populations from all nations have been searching for this sacred space that Kingston describes through pilgrimage for more than 4000 years. United Methodists, among other people of faith, still seek God through pilgrimages, holy journeys intended for reflection and a deepening of faith.

“Pilgrimage is something universal in the soul of people that makes them want to move,” explains Kingston, who is vice president of the World Methodist Council, and retired university chaplain at University College Dublin. In the later role, she has organized Santiago de Compostela pilgrimages for students throughout the past decade. “As people move physically, they may be moving spiritually and mentally as well.”

Often, people think of pilgrimages as treks to sites associated with Jesus, such as travel to the Holy Land, or solo walks along paths with spiritual significance, including Santiago de Compostela and Lourdes, France. But pilgrimages occur around the world and by all faiths, with Japan, Mexico and many other countries claiming their own versions of the sacred walks. 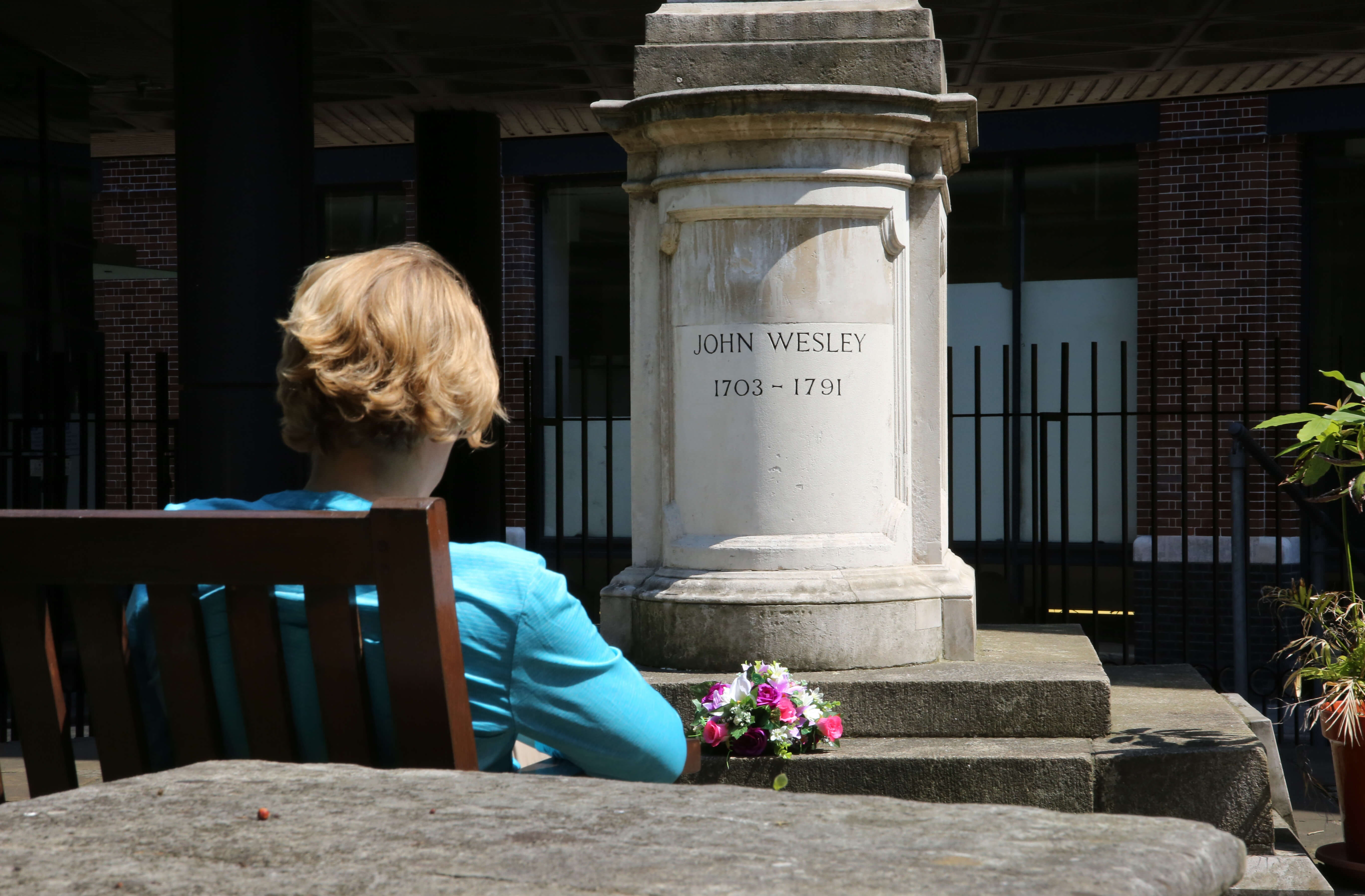 The tomb of John Wesley is located in a courtyard behind Wesley's Chapel in London. Sitting by the tomb is Shaliimar Holderly, one of the pilgrims of the 2016 Wesley Pilgrimage. Photo by Kathleen Barry, United Methodist Communications.

For United Methodists, the Wesley Pilgrimage has been an annual journey since 2010 (except for pandemic-related cancellations), as pilgrims visit the sites most important to the founders of Methodism in the towns of Bristol, Epworth, Oxford, and London, England.

The annual trek was borne out of Manskar’s experience of spending 15 days in England for a Wesley Studies doctoral class. On his first day, Manskar visited Epworth, where he walked through town to St. Andrews, the local parish church where Samuel Wesley was a rector and all the Wesley children were baptized.

One Holy Spirit across the ages

“Touching that font and the water made John and Charles real to me, come alive to me,” Manskar recalls. “Being in that place filled me with awe and gratitude for the Wesley brothers. The same Holy Spirit that inspired and led them, inspires and leads me.”

In that moment, Manskar recalls, his pilgrimage began.

Pilgrims, it’s important to note, may look like tourists, but the two differ significantly.

“Both are travelers, but tourists are escaping life, while pilgrims are embracing life,” Manskar says, paraphrasing a quote from Phil Cousineau’s “The Art of Pilgrimage.”

At its core, “pilgrimage is an act of devotion, to find a source of healing, always a journey of risk and renewal,” Cousineau writes.

The lifetime pilgrimage of being one in Christ

“I haven’t ever been on a pilgrimage,” admits Daniel Pratt Morris-Chapman, but he considers his life as a continual pilgrimage as he lives out his faith across countries and cultures.

Morris-Chapman is a British Methodist mission partner. Through his ministry, he has served in Cameroon, where he taught theology in an English-speaking seminary; he returned to the U.K. for a time before going to Milan to serve a church in Italy that had requested pastors who had worked in Africa because of the growing number of African immigrants. Morris-Chapman now serves a church in Rome.

“I’ve never chosen an appointment; I’ve always been sent,” he points out, adding that his current congregation contains five Europeans and the rest from other parts of the world.

“The ministry here is how do we walk together as Europeans, Africans, Asians and others, as well, to worship together and also to allow one another the liberty to express our faith in different ways. They call it, ‘being church together.’ Although we may express our faith differently, we are all one in Christ.

“I don’t know where God will send us next,” Morris-Chapman says, “but as I look back on all the steps, I can see how God has arranged each one.”

Step by step toward transformation

Pilgrims seek transformation across the journey that God has laid out.

“Pilgrimage is often regarded as the universal quest for the self. Though the form of the path changes from culture to culture, through different epochs of history, one element remains the same: renewal of the soul,” Cousineau writes.

Kingston puts it another way.

“Pilgrimage is about being in a space apart. Leaving the ordinariness of life and the calls of life and the pressures of life and simply going out there with little or nothing.  It is not so much about a start and an end, but it’s a road between two places. The walking, the journeying is what is significant.”

Crystal Caviness works for UMC.org at United Methodist Communications. Contact her by email.