Perspectives: A conversation with civil rights titans about racism

A UMC.org feature by Crystal Caviness*

The moments they have lived fill the pages of U.S. civil rights history.

These United Methodists—The Rev. Gilbert Caldwell, Clara Ester, the Rev. James Lawson, Dr. Rip Patton and the Rev. Tex Sample—are change makers who as young adults not only participated in but shaped history. The lessons learned along the way should not be forgotten.

Today, these civil rights titans reflect on what’s happening in the United States regarding racial injustice, how the current protests surrounding the death of George Floyd and others due to police brutality compare to the 1950s and 1960s and what role The United Methodist Church can play in ending racism.

Working alongside the likes of the Rev. Dr. Martin Luther King Jr., the Rev. John Lewis and others, the efforts of these United Methodist leaders resulted in the passing of the Civil Rights Acts of 1964 and 1968, banning discrimination and segregation, removing “whites only” signs and paving the way for future reform.

“Our movement was the first since the 1860 movement to mobilize the black community to begin to fight the persecution that we faced … and that began to deal with racism and its structures of wrong,” says the Rev. James Lawson, who was handpicked by King to teach about non-violent protests to those participating in the movement.

Though non-violence was a goal, the movement was far from peaceful. Arrests were made, participants were beaten, cities were burned, people were killed. Anyone who chose to be a part of the movement understood the dangers.

“All of us knew,” says Patton, a member of Gordon Memorial United Methodist Church and a veteran Freedom Rider who traveled by car from Nashville to Montgomery to board a bus headed to Jackson, Mississippi. When it came time to leave Nashville, Patton says, he knew that one bus had been burned and friends had been beaten and hospitalized. He also was told that 3,000 members of the Ku Klux Klan would be waiting for the bus. When the bus finally arrived in Jackson, Patton, the fourth person off the bus and part of a trio that walked through a door labeled “Whites Only” to sit at the bus station lunch counter, was arrested and taken to the Mississippi State Penitentiary.

“That was my first arrest,” Patton says.

By the time King was assassinated on April 4, 1968, the United States was beginning to see change. But more change needed to happen.

“The Civil Rights acts were passed. We could ride the bus. The colored signs have to come down,” recalls Ester, “But the hate never left.”

Ester, a United Methodist deaconess and United Methodist Women national vice president, was in the Lorraine Hotel parking lot when King was shot, a moment that Ester says transformed her own hatred.

“We have some outrage in this country right now because of the George Floyd murder and we should have moral outrage,” says Sample. “My concern is that we’re the kind of society that something today eventually wears away and the media pulls away and the people pull away. And then we don’t have anything left. That makes it so important that we don’t have simply expressive demonstrations but that we have people organizing on the ground and building that kind of power and follow through on that outrage and take it in those directions to make a difference.”

Sample, a United Methodist pastor who is a lifelong civil rights advocate and community organizer, knows firsthand the importance of organization. During the 1960s, he worked with the Massachusetts Council of Churches, organizing the Selma to Montgomery march, which Sample joined for the last leg with more than 25,000 other marchers. All told, the Selma to Montgomery march was a series of three well-orchestrated marches over an 18-day period.

For all the progress of the civil rights movement, some leaders believe that era was only phase one.

“The USA needs, in the 21st century, a major non-violence campaign that will make our movement in the 50s, 60s and 70s pale in comparison,” Lawson suggests. “A movement that will advance the cause far more that we have advanced it. It is the movements of the 20th century that brought us to this place.”

The Rev. James Lawson speaks about nonviolence at First Baptist Church in Montgomery, Ala., the site of a 1961 confrontation between Freedom Riders and an angry mob. The visit to the church was part of the March 6-8 congressional civil rights pilgrimage to Alabama. Lawson was one of several United Methodist leaders participating in trip sponsored by the Faith and Politics Institute. A UMNS photo by Kathy L. Gilbert

Lawson is encouraged by what he sees happening in cities across the nation – and the world.

“This is God working, that’s my position,” says Lawson, crediting the Black Lives Matter network for “structuring the present campaign so well. They have systematically been organized since the death of Trayvon Martin. And this campaign is a consequence of their organizing and strategizing.”

One similarity between the civil rights movement and what is occurring now is the involvement of “people who were tired of being tired,” says Ester. That frustration coupled with the COVID-19 pandemic has escalated the current movement, she believes.

“The pandemic has everybody in the country practically working from home or not working at all. So you have a larger population that is free and then you have technology…so you see what’s going on,” she explains. “George Floyd is giving his life that day and Americans witnessed the cruelty and the viciousness of white privilege … It ignited all of these people in the stay at home order …and the people who have lived through this for 400 years.”

The leaders are encouraged that the current movement against racial injustice can, as Lawson expresses, bring to fruition the groundwork laid in the 1950s and 1960s.

“I am deeply impressed with the diversity of people who are carrying Black Lives Matter signs,” says Caldwell, a United Methodist pastor who supported voter drives in Mississippi, marched on Washington and marched from Selma to Montgomery at King’s request.

“I want to suggest that this is a turning point in terms of racial justice. The participation of whites is important,” he notes, adding that millions of people seeing Floyd’s killing “was a wake-up call that we who are Black have been concerned about all along. That’s a very hopeful sign.

“I look at all of those young people and hope they will be bold and brave enough to swim against the stream and be anti-racist,” says Caldwell.

The next step, Patton says, is for the new group of change makers to work together in solidarity.

The role of The United Methodist Church

All agree that The United Methodist Church can lead the way in addressing the nation’s systemic racism. 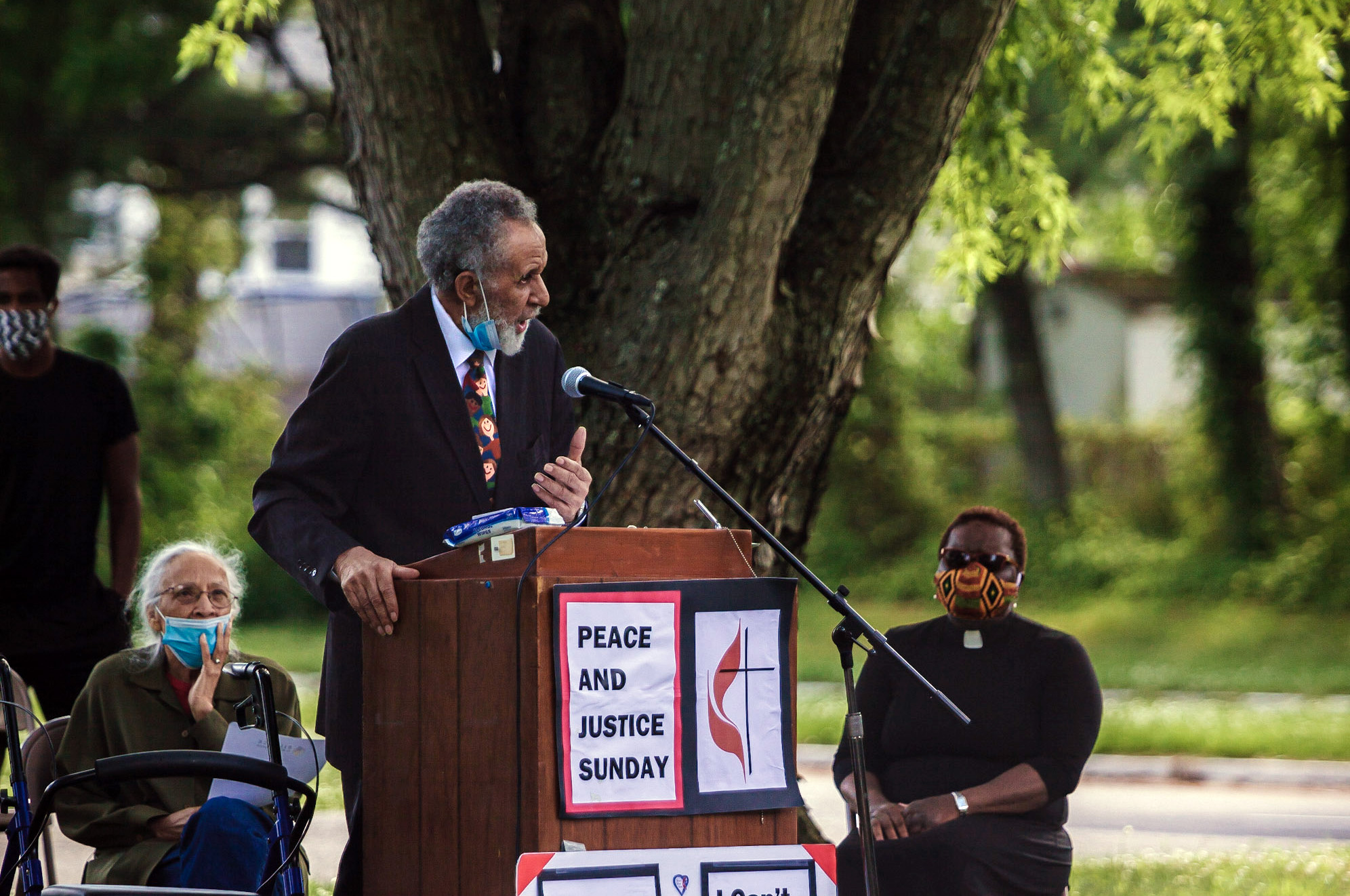 The Rev. Gilbert Caldwell, a retired United Methodist pastor and civil rights activist who marched alongside the Rev. Martin Luther King Jr., speaks during a Black Lives Matter rally June 7 in Willingboro, N.J. To Caldwell’s right is his wife, Grace Caldwell. To Caldwell’s left is the Rev. Vanessa Wilson, chairperson of the Greater New Jersey Commission on Race and Religion and pastor of Good Shepherd United Methodist Church in Willingboro. The protest was one of many taking place in the U.S. in smaller cities and towns involving United Methodists. Photo by Aaron Wilson Watson.

Speaking candidly, these civil rights icons say the denomination often has missed opportunities to eradicate racial injustice. The 1968 merger that formed the current United Methodist Church and eliminated the segregated Central Jurisdiction was the right step, they say, but has not led to radical change.

“We have to start unlearning what we have been taught and learned all our life and relearning what the truth may be,” she states.

“How many white churches,” she wonders aloud, “have reached out to black churches to say ‘I hear you and I feel your pain? What can I do to alleviate some of that and to help us better understand?’”

“Paul says God has made a new creation and that new creation is in the church and its community,” says Sample. “The point is we have wonderful biblical justification to be a church that responds to God’s grace and also to the righteous activity to God in the world. We need the rising up of people of faith to say we are going to work together for the common good.”

“I want 2020 to be viewed as the time when the USA and The UMC and all the nation takes seriously the racial divide and realize we are not the nation we could be,” Caldwell says.

“My hope is that somehow the Spirit is working among us that we as United Methodists can work – traditionalists, centrists and progressives – and we will confront not only racial injustice but injustice of all kinds so that 2020 will be the time when The United Methodist Church turns around and develops a new future for itself.

“I believe God is calling us to be a Racial, Reparations, Reconciling Church,” Caldwell proclaims. “To be so would be to engage in the transformation of the world in response to Jesus Christ.”