Partnership of 2 churches offers children hope for the holidays

The mission-minded St. John’s congregation dives into its Advent Mission Initiative annually, collecting offerings to share after Christmas with worthwhile ministries beyond its walls in need of support. The most recent beneficiary is El Mesias’ Bright Future Academy, a child development center 25 miles away, whose several dozen children learn and play daily in the church’s brightly colored classrooms and hallways. 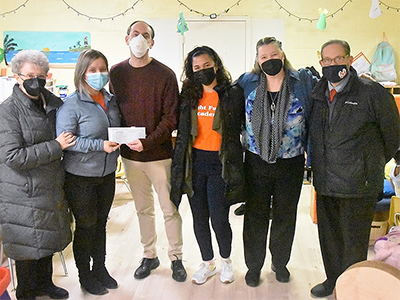 They would love to learn, play and exercise outdoors also, using the church’s fenced in playground; but they can’t. It’s been infested with rats for the past year, a sad and unsafe result of closed restaurants and cutbacks in waste disposal services and pest control during the pandemic. The vermin even built tunnels under the playground’s wood mulch-covered surface. What it needs is resurfacing with an impenetrable concrete base, which would cost about $15,000, and also new and improved playground equipment.

In mid-January, the Rev. Brad Leight, St. John’s pastor, led a cadre of his leaders to El Mesias to take a tour and deliver a check for $10,000. Members had raised the funds during Advent and Christmas to help with the resurfacing.

Since El Mesias has received another generous donation from the Philadelphia Foundation—enough to pay for the resurfacing—St. John’s gift will be used instead to purchase playground equipment, which is needed to help the children learn and develop gross motor skills. But the church’s visit also yielded another gift to El Mesias and its preschool tenant, one that keeps on giving. It began a relationship.

“Our congregation is excited to be a part of this ministry,” said Ruth Portzline, a Certified Lay Minister who leads St. John’s outreach efforts and keeps the church informed about Bright Future’s progress.

“We’re so grateful for this gift and our new relationship,” said the Rev. Efrain Cotto, El Mesias’ resourceful pastor and a therapist at a nearby elementary school. “And now our vision has grown beyond just resurfacing the playground for our children.”

Because the preschool is a vital lifeline for the church and its community, Cotto sought the needed help, including asking EPAUMC’s NEWSpirit Communications to come visit and publish an article. That article, “Church needs aid to stop rodent invasion in preschool yard,” prompted donations from St. John’s and the Philadelphia Foundation.

El Mesias is the oldest Latino/Hispanic church in the conference. Its tiny congregation—reduced in size by the pandemic but also by several relocations—is still ministering in various ways to its struggling neighborhood, including working families who need childcare and also a large population of unhoused neighbors.