New grant to help Ukrainians deal with threat of landmines

Nearly 300,000 square kilometers (116,000 square miles) are still seen as “contaminated”, according to data released by Ukraine’s Emergency Services. Making that area safe could take a decade, the government said.

As the borders of war zones in Ukraine shift and change, some residents are returning home to find their neighborhoods and farms littered with mines and unexploded cluster munitions hidden to do the most harm. A new $2 million USD grant from the United Methodist Committee on Relief (UMCOR) to Mines Advisory Group (MAG) will help demine reclaimed ground, enable MAG teams to identify the exact location of unexploded ordnances and provide Ukrainians living in or returning to these areas with the education that will enable them to adopt safe behaviors to reduce the risk of accidents. 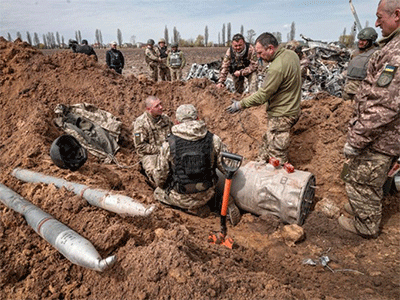 Explosive devices are often being placed to do harm to civilians. In Irpin, Lindila and Tatiana fled their apartments when the building next door was hit. When they returned, they could see through the crack of a blast-damaged door that a hand grenade had been placed on top of a large water dispenser. The authorities were informed and hopefully it will be dealt with soon.

As part of the General Board of Global Ministries, the mission and humanitarian assistance agency of The United Methodist Church, UMCOR provides relief and recovery response throughout the world. UMCOR is extensively engaged in providing aid and services for refugees and displaced people both inside Ukraine and beyond in the wake of the Russian invasion of late February 2022.

MAG is a long-time UMCOR partner and the two have worked together on past demining and explosive ordnance risk education projects in Africa, Asia and the Middle East. With a working knowledge of MAG’s provision of quality clearance and educational activities, UMCOR is now partnering with MAG to support the establishment of operations in Ukraine and all the administrative activities that go along with it.

Darren Cormack, chief executive of MAG, said: “I have been in Kyiv seeing first-hand the devastating effects of the conflict. The use of heavy artillery, landmines, cluster munitions, both in rural and populated areas, has left a devastating and deadly legacy. Land that should be used for agriculture, or homes that should provide shelter for children to play and sleep, especially as we go into the hard Ukrainian winter, are too risky to be used. 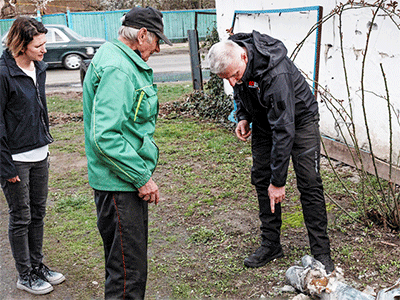 A father and daughter meet with a mine inspector in their backyard. Photo: Sean Sutton/MAG.

“The challenges ahead are monumental and potentially growing as new territory is liberated in Kharkiv, a city and region that has undergone months of intense, bitter ground-fighting accompanied by a brutal artillery campaign.

“This UMCOR funding is of critical importance because it will enable us to scale-up and accelerate our efforts to keep people safe, working in close co-operation with local partners.”

UMCOR’s grant to MAG will enable MAG to accomplish several goals, including:

Ukraine has signed the 1997 Mine Ban Treaty that comprehensively prohibits all types of victim-activated explosive devices. Russia has not joined the treaty but is bound by the prohibitions and restrictions on mines, booby-traps and other devices under the United Nations Convention on Conventional Weapons.

excerpt from a Press Release by Dan Curran, UM Global Ministries and UMCOR