Since the Bikes & Bibles program began three years ago in Sierra Leone, churches have been planted in communities that previously were Muslim or practiced traditional African religions.

Steven Senesie, circuit minister for the Mongere Circuit in Bo, received a motorbike from the Bikes & Bibles program in 2015 and said his experience has been great.

"I work in a very difficult terrain where mobility is a huge challenge," he said. "The commercial motorbikes are so expensive that a pastor cannot afford paying on a regular basis, and pastors have to reach out to congregations in remote communities all the time."

The Bikes and Bibles program, coordinated by Joe Kilpatrick of the North Georgia Conference, provides motorbikes, bicycles and native-language Bibles to pastors in Sierra Leone and the Democratic Republic of Congo. 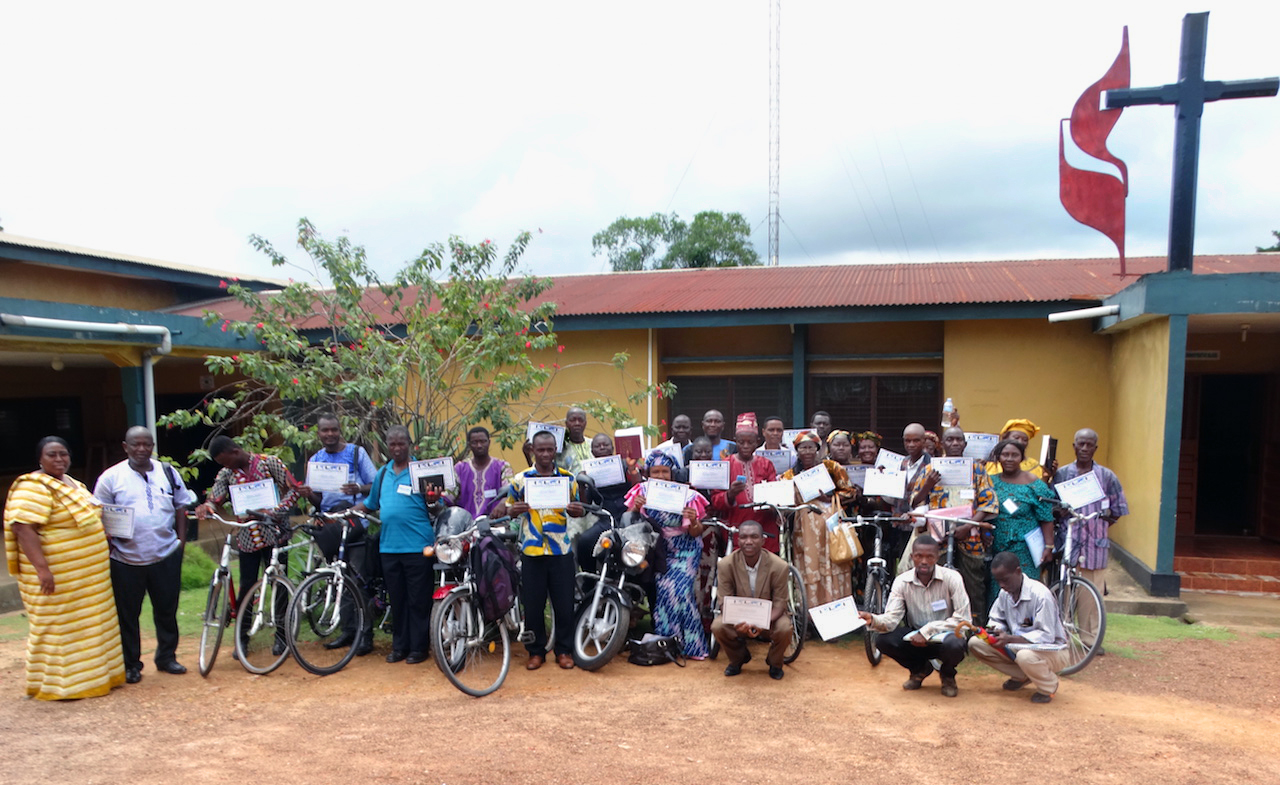 Clergy and lay leaders display their certificates and bikes after a Bikes and Bibles training session at the Child Rescue Center in Bo, southern Sierra Leone. Photo by Phileas Jusu, UMNS.

Before he received his first bike, Senesie walked to some stations in his circuit — 12 miles to supervise a pastor and his congregation at Mbawomahun. Membership there had dwindled to 15, and Senesie said the congregation felt abandoned and deserted by the church due to the lack of visitation from circuit ministers.

With Senesie's regular visits after he received a new bike, membership in that congregation is now up to 150.

"I now pay them regular visits, and we share our successes and challenges together," he said. He calls the spirit among the congregation "marvelous" and said that even though members are generally poor peasant farmers, giving in the church has somewhat increased.

"Before Bikes and Bibles, there were just three stations in my circuit; today we have seven," he said. "For Mongere, where I am pastor, membership at the time was between 30 and 40; today, it is 150. Membership in Gumahun had dwindled also to 16 before Bikes and Bibles; today it is up to 150 because I pay them regular visits and we together plan well."

His success is being rewarded this year with a new motorbike.

A recent training program focused on sustaining programs for the congregations and their communities. The June 28-July 1 training was attended by 30 clergy and lay leaders.

How you can help

Bikes & Bibles provides motorbikes, bicycles and native-language Bibles to pastors in Sierra Leone and the Democratic Republic of Congo.

Three new motorbikes, 12 bicycles and 40 English Bibles, together with several Bibles in Sierra Leonean languages, were given to participants at end of the training. Participants were urged to go into their communities to make disciples for Jesus Christ for the transformation of the world.

This year, Bikes and Bibles donated another $7,000 to the Sierra Leone Conference for purchasing motorbikes, bicycles and Bibles, while the local churches in the Bo District also contributed to support the training.

The Rev. Matthew Kainyande, the new Bonthe district superintendent, said the new motorbike he received after the training is the most effective gift his ministry has ever received.

His district is on an island, and he said motorbikes are the only transportation available. Kainyande would ride the bike on the main island to reach out to schools and churches and would at times have to load it on board a boat to cross over to other smaller islands where he would again use it to reach out into suburban communities.

"The bike is going to be very useful to me because there are times I would have to conduct services in more than one location on Sundays and Wednesdays, I will now be doing such services in record time," he said. He said some of his churches only have teacher evangelists, who cannot serve Holy Communion.

"An ordained pastor needs to be at hand to deliver such services that an evangelist cannot give," he said.

He said the motorbike is also fuel efficient in addition to being a timesaver.

"Where I would have used weeks to move from one station to another, I'd now use days or even hours," Kainyande said. "I'll now have to reach certain areas that I had thought would be difficult for me."

He anticipates increase in membership because regular visits will mean concern for those congregations that had felt forgotten by the church.

Jusu is director of communications for The United Methodist Church in Sierra Leone. News media contact: Vicki Brown at (615) 742-5470 or [email protected]. To read more United Methodist News, subscribe to the free Daily or Weekly Digests.