Many United Methodist student ministries include short trips in their activities. These "field trip" experiences may not be at the heart of a church's youth ministry like the summer mission trip or winter retreat, but they serve an important role.

"I believe long-term spiritual growth is often jump-started away from our church building," says Dustin Buell, Student Ministry Leader at Chillicothe (Missouri) United Methodist Church, who leads youth on a variety of trips. "Placing wheels on a youth ministry can serve as a catalyst for individual growth."

Simple, short trips are great opportunities for youth to deepen their relationship with Jesus, one another, and the church. 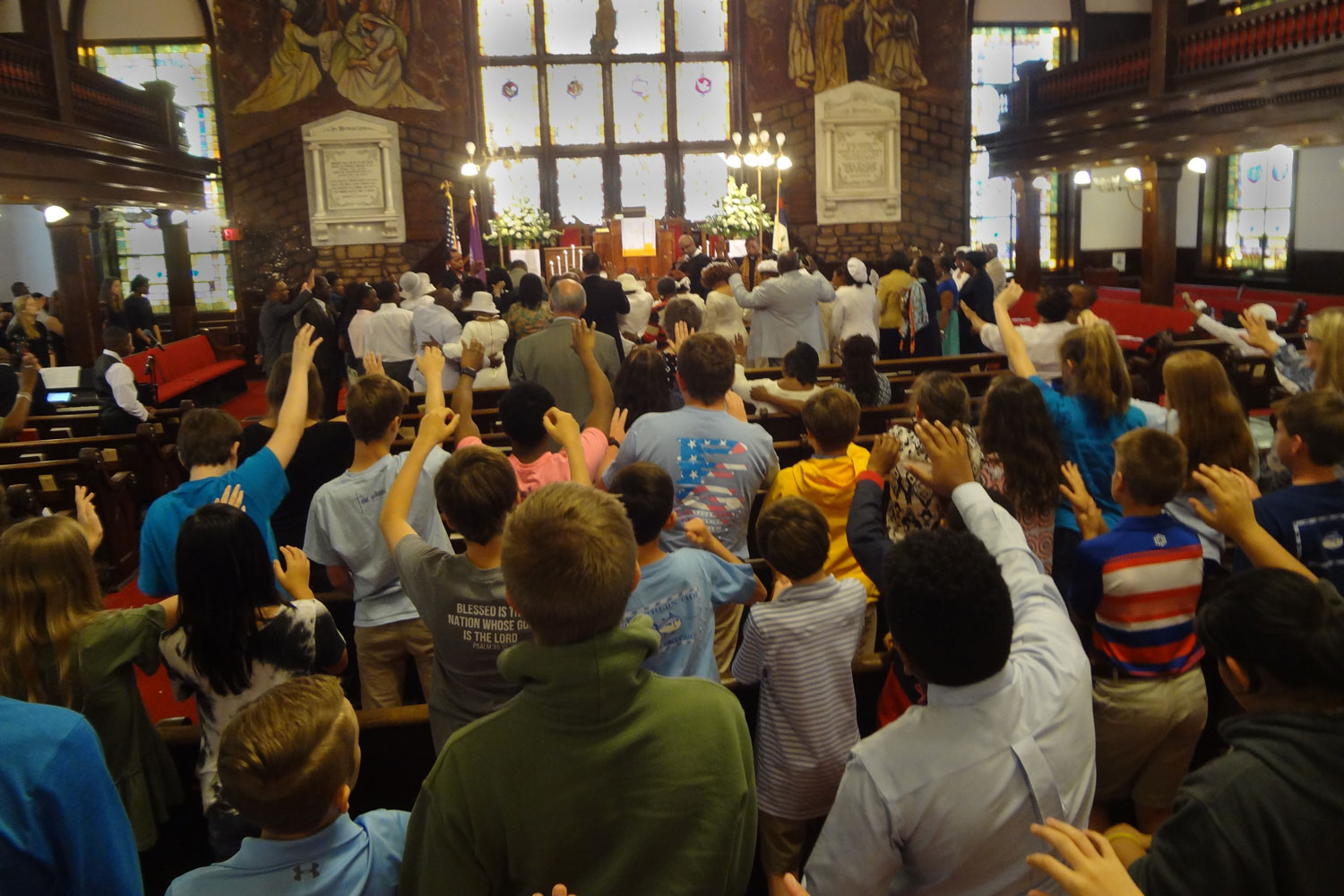 A short trip to worship with another congregation is a great way for youth to learn about what unites us as Christians. Photo by Austin Bond, Belin Memorial United Methodist Church.

During a June, 2015 mission trip in Summerville, South Carolina, youth minister Austin Bond had a lot on his heart. Days earlier, a man killed 9 people inside Emanuel African Methodist Episcopal Church in nearby Charleston. On the way home, Bond felt led to drive by the church.

"All the news stations were still there," Bond reports.

Standing outside the building, he spoke with a man who later identified himself as a member of Emanuel AME. "In about two weeks, no one will even care that this happened," Bond recalls the man saying.

"I'll try my best not to forget," Bond replied. "I was making a promise to him, but I really didn't know what that meant at the time," he remembers.

Driving home Bond thought, "Why don't we take our youth group down there for a day trip?"

Visits to worship with other congregations were already part of the confirmation class curriculum at Belin Memorial United Methodist Church, so this seemed like a natural fit.

The following spring about 50 youth and adults traveled approximately 90 minutes from Murrells Inlet, South Carolina, to Mother Emanuel AME Church. After worship, they ate lunch in Charleston and spent time at a park before returning home. The trip was so inspiring, it became an annual event. 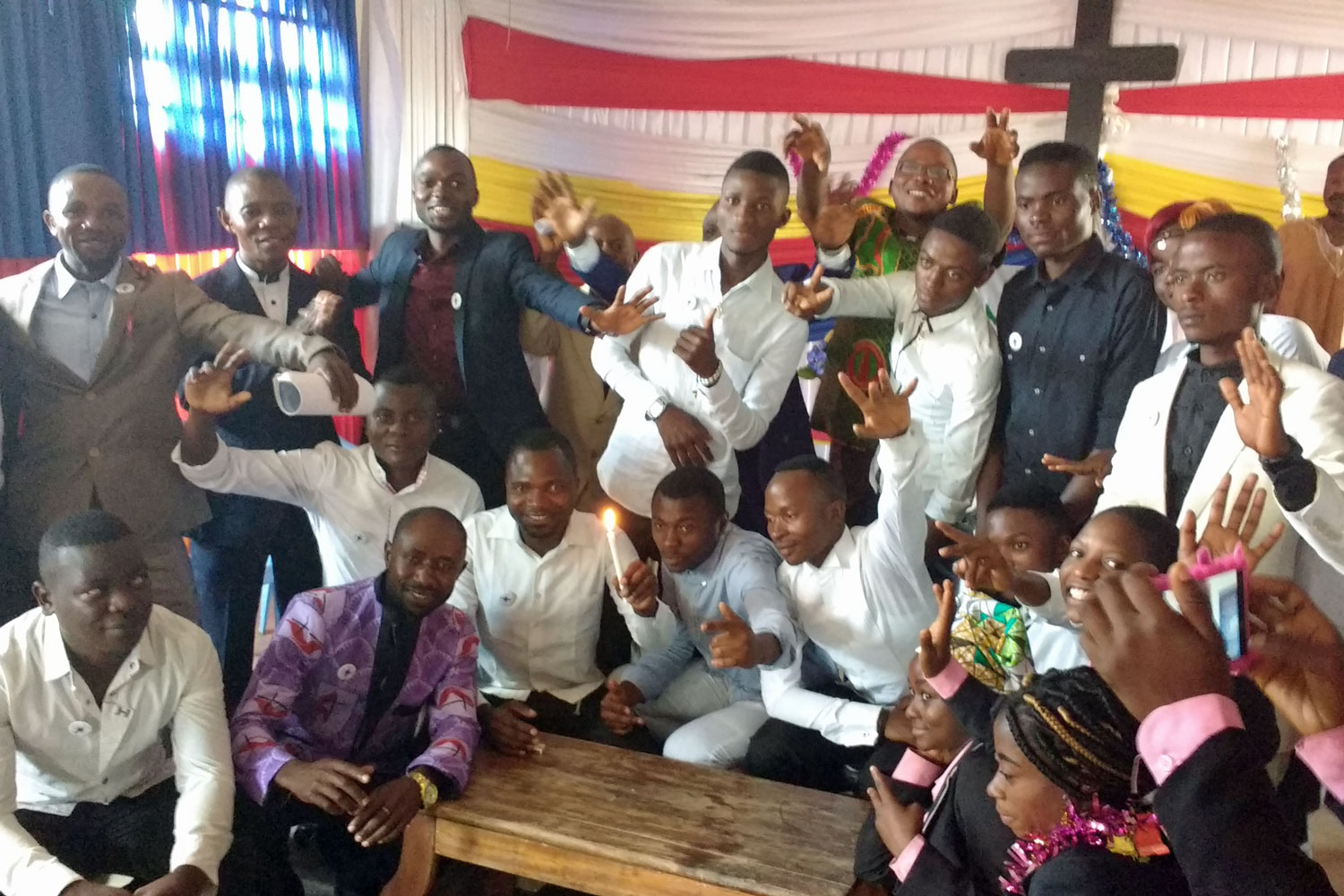 Young people from the Democratic Republic of Congo and Burundi cross national and cultural boundaries to learn about one another. Photo by Philippe Kituka Lolonga, Kivu Conference Communicator.

Though the congregations appear very different, some worship elements feel familiar to the youth from Belin UMC. "We see the acolytes coming in. We say the Apostles' Creed," Bond reports. "We're connected, even though we didn't know it."

In the Kivu Conference of the Eastern Congo Episcopal Area, Blandine Wembo Tshoso leads groups of youth ages 12 to 17 on a six-hour bus trip from Bukavu, Democratic Republic of Congo, to Bujumbura, Burundi. The trip crosses tribal, ethnic, and national boundaries to help youth from the neighboring countries learn about each other in their two days together. Pamela Souzana Kombi, a 17-year-old who participated in a trip said, "This journey helped me because I have discovered other cultures."

Cindy Klick, youth director at St. Andrew United Methodist Church in Highlands Ranch, Colorado, also leads a variety of field trip experiences, including visits to other worship services. The congregation's confirmation classes, for example, have worshiped in a Jewish synagogue, a Roman Catholic congregation, and a Spanish-speaking United Methodist church.

In addition to the service opportunities she leads for youth at other times of the year, Klick plans these trips because they help confirmands "better understand the roots of Christianity and United Methodism, help us realize that different faith traditions share a lot of similarities, and give students additional information on which to base their own church membership commitment during Confirmation." 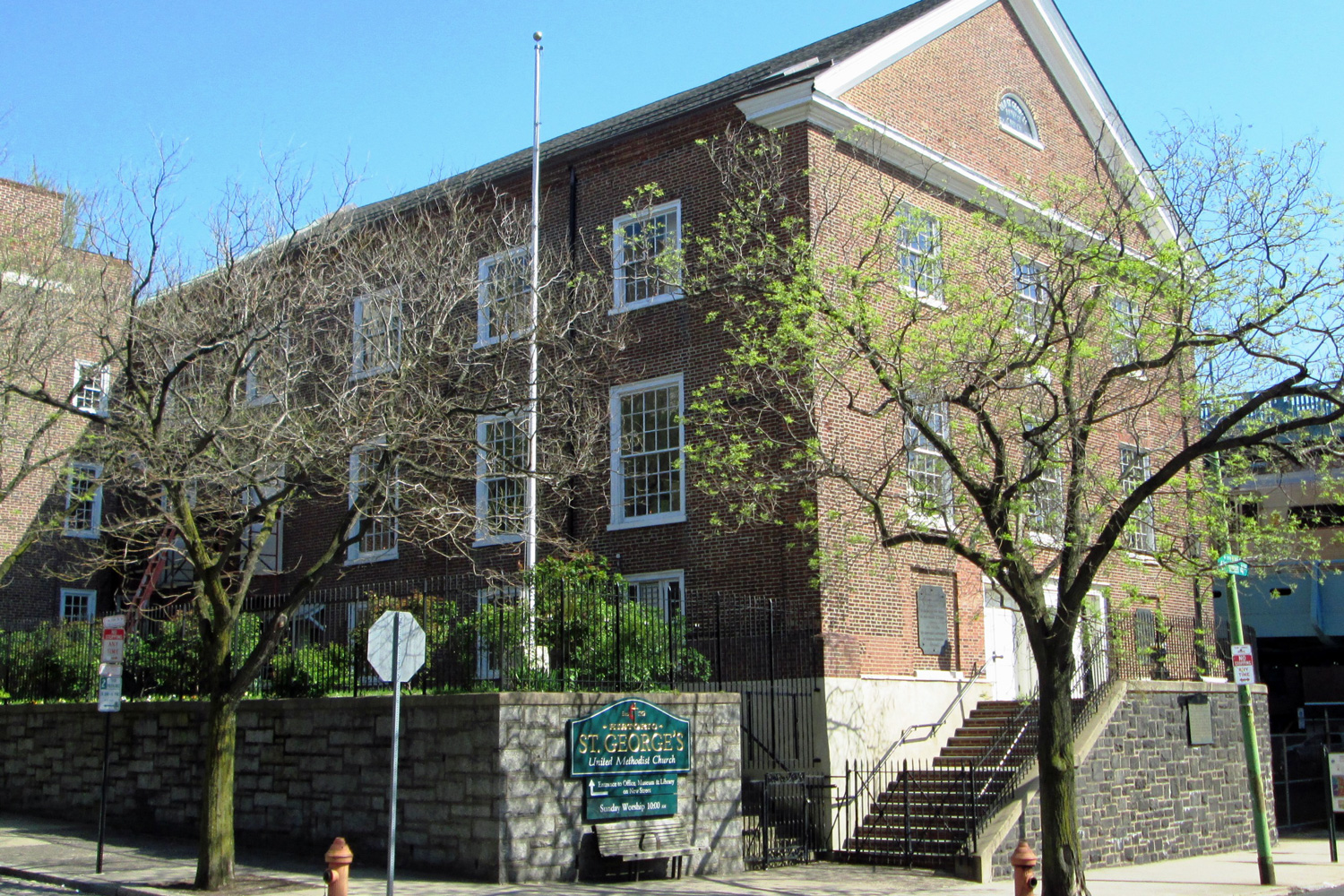 Historic St. George's United Methodist Church is a great place to connect with our history. Photo by Beyond My Ken [GFDL or CC BY-SA 4.0], from Wikimedia Commons.

"They make United Methodist history come to life," says the Rev. John Cordes, pastor of St. Andrew UMC, "giving teens and adults the perspective of a setting in which events actually happened."

The Rev. Sean Gundry, Associate Pastor of Gainesville (Virginia) United Methodist Church also brings confirmation classes to Historic St. George's. Both he and Cordes appreciate that along with the highlights, Time Traveler shares "some of the missteps of the church over the centuries and the lessons we can learn," Gundry explains.

Every spring, Buell leads an End-of-Confirmation Celebration Trip to Nashville, Tennessee. During the weekend away, youth serve lunch at the Nashville Rescue Mission, visit Discipleship Ministries' Upper Room Chapel and meet leaders of the Young People's Ministry division. After dinner, they attend a show at the Grand Ole Opry.

"We could celebrate anywhere," Buell says, "but by traveling to Nashville our students are able to see that our church really is much larger then Chillicothe, Missouri."

Buell believes breaking the the routine helps participants hear God in new ways. "Even when trips don't go exactly as planned—when vehicles break down on the side of hot, summer highways—the subsequent experiences, decisions and shared memories can serve as a great platform for modeling what faithfully following Christ looks like outside the doors of the church building." 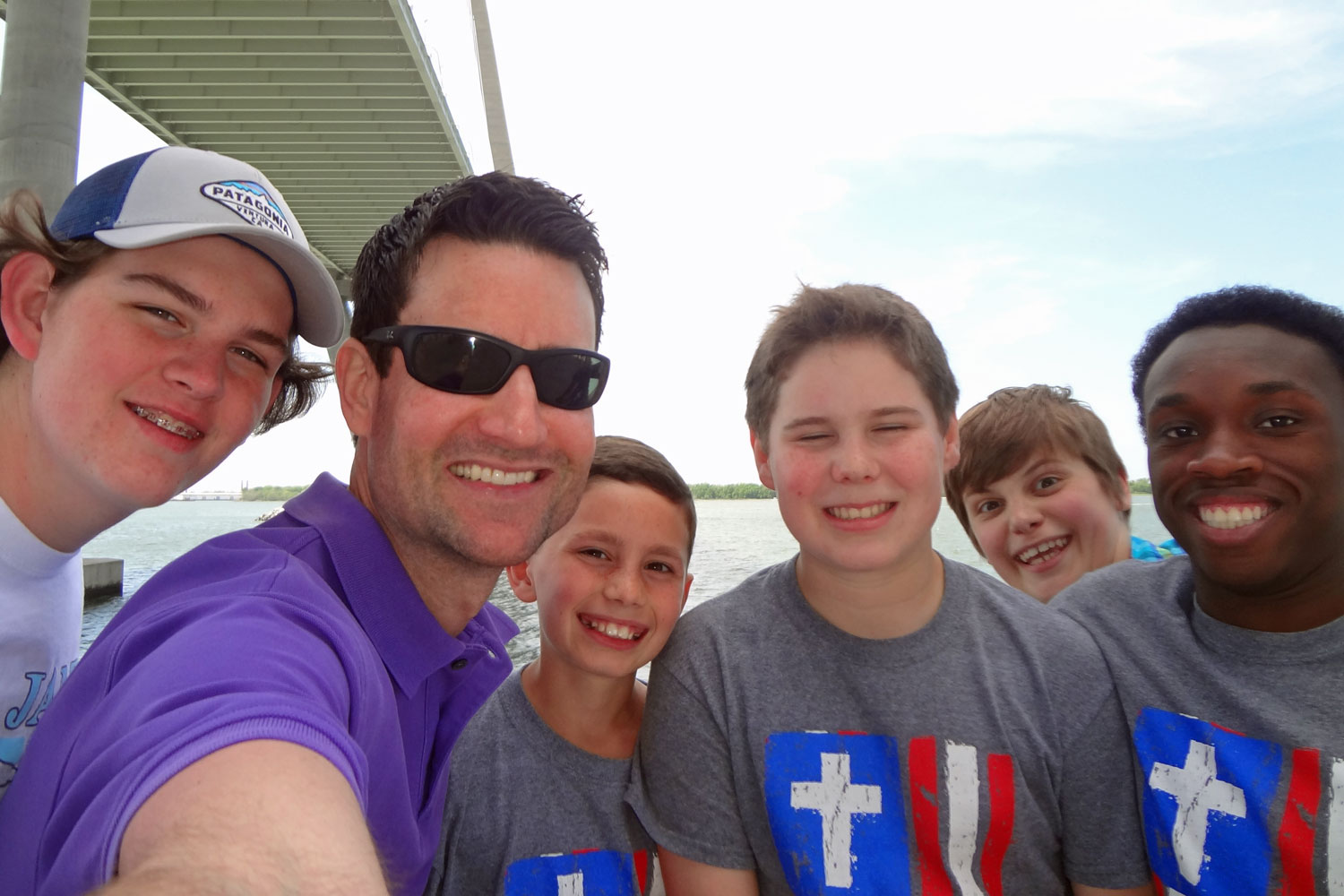 The unexpected and fun moments can also serve as opportunities to connect and learn. Photo by Austin Bond, Belin Memorial United Methodist Church.

Damas Lushima, youth coordinator in the Kivu Conference, has experienced a trip that did not go as planned. On their way from Bukavu to Lwiro to learn about biodiversity at a research center and to play some football (soccer), the group's bus was in an accident. The youth weren't able to complete the trip, but they learned and grew through the experience.

Though sometimes difficult, many youth leaders value field trips. They offer students and their chaperones opportunities for growth as they experience the church throughout history, across boundaries, in their community, over a border, and around the world. They remind us that we are all connected.

For Bond, the annual trip is also a way of keeping his promise. "We remember," he says. "We're saying by our presence that we're not going to forget."

Special thanks to Philippe Kituka Lolonga, communicator of the Kivu Conference, for contributing to this story.