Mary McLeod Bethune was an African-American woman, a pioneer of women's leadership, and a devoted Methodist who opened doors of education by founding a school that continues today.

In 1904, Mary McLeod Bethune financed a dream by baking sweet potato pies. With 5 girls and $1.50, she started a school that became a Methodist institution. Mary was born in 1875 on a South Carolina cotton farm.

Mary went to college and opened doors of education. Her school for girls grew quickly. In 1931, the Methodist Church helped the merger with the Cookman Institute for boys to form Bethune-Cookman College.

Mary Bethune traveled extensively, was a delegate to four Methodist General Conferences, advised five U.S. presidents, and was the only black woman present at the founding of the United Nations in 1945.

Back on campus, she was "Mama Bethune." 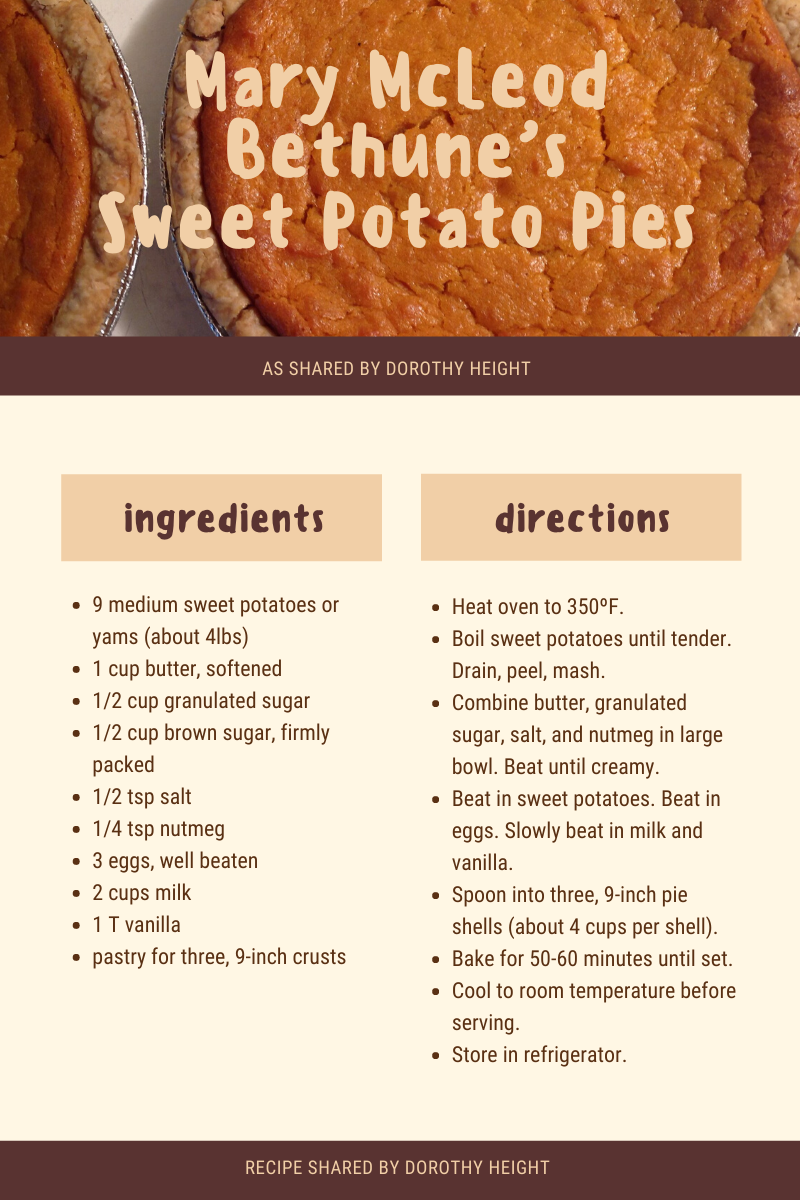 Get this recipe and others on our Pinterest page.

The icon passed away in 1955, leaving a last will and testament full of wisdom and love.

"I leave you love. 'Love thy neighbor' is a precept which could transform the world if it were universally practiced."

"I leave you the challenge of developing confidence in one another."

"I leave you a thirst for education."

"I leave you respect for the use of power."

"I leave you faith."

"I leave you racial dignity."

"I leave you a desire to live harmoniously with your fellow man."

"I leave you finally a responsibility to our young people."

"If I have a legacy to leave my people, it is my philosophy of living and serving. I think I have spent my life well. I pray now that my philosophy may be helpful to those who share my vision of a world of Peace, Progress, Brotherhood, and Love." – Mary McLeod Bethune 1875-1955

Every state has two figures in the Statuary Hall of the U.S. Capitol in Washington. In 2018, the Florida state legislature voted to replace one of the statues representing Florida with an image of Mary McLeod Bethune.

This video was produced by United Methodist Communications in Nashville, TN.
Media contact is Joe Iovino.