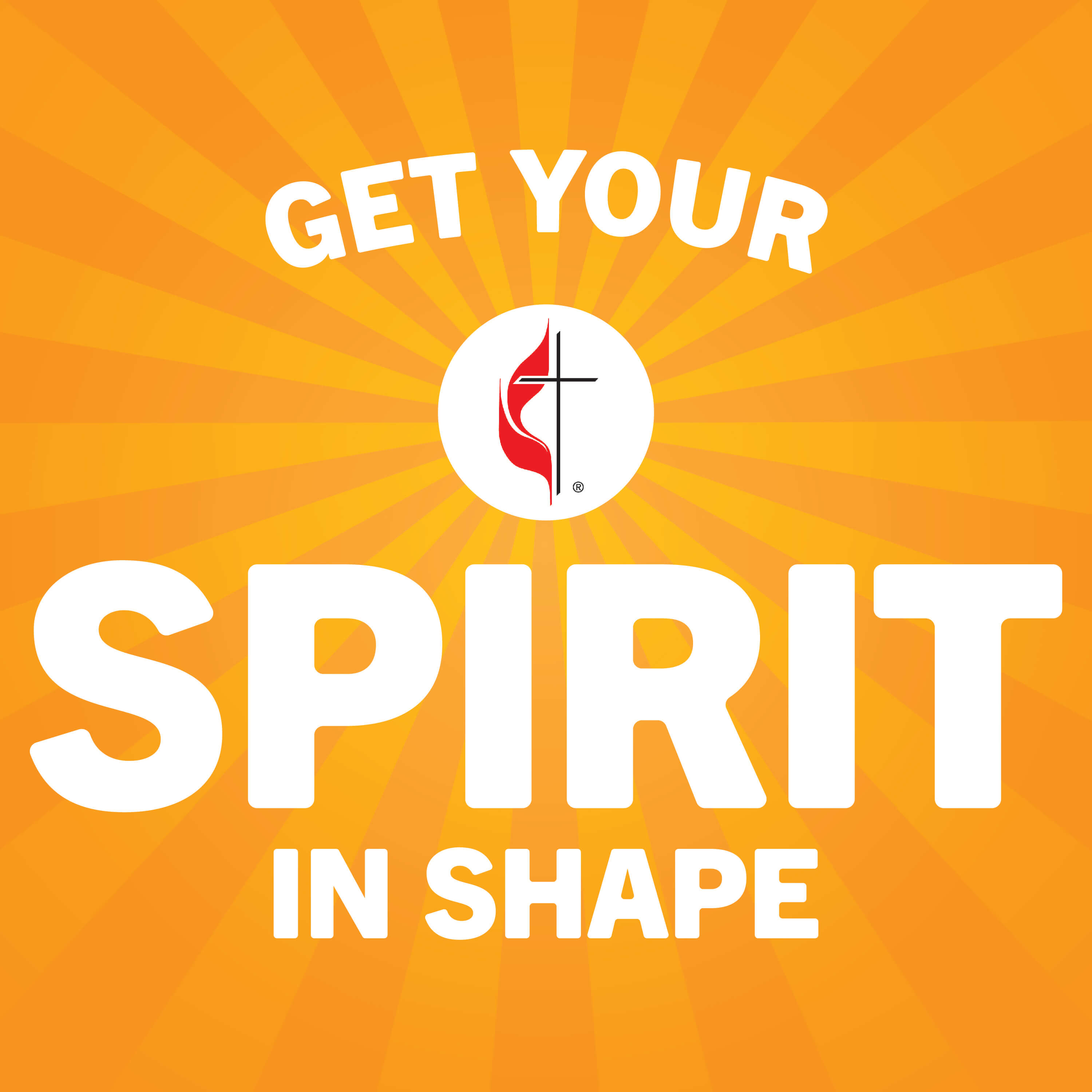 Join us for a special bonus episode for Star Wars Day.

When we heard that United Methodist pastor the Rev. Jacob Armstrong had used Star Wars in a sermon series, we wanted to learn more. So when he recently visited our studios, we asked him about it. He told us about a connection he sees between Han Solo and Jonah, and another between Luke Skywalker and the Jacob of the Bible -- his namesake. He also told us how a couple of quotes from The Lord of the Rings can inform and encourage us in our spiritual journeys.

Help us spread the word

More Get Your Spirit in Shape episodes

Thank you for listening, downloading, and subscribing.

Joe Iovino, host: Welcome to Get Your Spirit in Shape, United Methodist Communications and UMC.org’s podcast to help us keep our souls as healthy as our bodies. I’m Joe Iovino.

Today is a special bonus episode of Get Your Spirit in Shape for Star Wars Day, May the Fourth – as in May the fourth be with you.

When United Methodist pastor the Rev. Jacob Armstrong recently visited our studios, we took a moment to ask him some questions about how he uses pop culture references in his preaching, and how he sometimes finds inspiration in the movies. Mostly, we focused on Star Wars and The Lord of the Rings.

The Rev. Jacob Armstrong: Hi, this is Jacob Armstrong. I’m pastor of Providence United Methodist Church. Did you know that you can actually find God everywhere, even in those stories, TV shows and movies in popular culture?

Oftentimes, we see a disconnect from what’s happening in the world and what we’re talking about in church. What I have found so meaningful and fun is seeing the connection between the great God story of the Old Testament and New Testament and the stories that we love to see in the movies.

Joe: We asked him where his love for epic adventures like Star Wars began, and how he started connecting them to the Bible.

Jacob: I began to love that the elements of story came from really those kind of Star Wars movies. And then having to play them out in my own bedroom with action figures. So the movies come alive as kids where suddenly I’m Luke Skywalker or Darth Vader depending on who I’m pretending to be that day.

My namesake Jacob was a wrestler and someone who struggled with God. Eventually as a kid growing up in the church I began to connect those stories together. When I’m hearing the pastor talk about Jacob and his wrestling in the midst of being a person who’s following God, but also being a deceiver and someone who’s looking out for his own good. It’s the same struggle that Luke [Skywalker] was wrestling with. I don’t know that I was explicitly connecting those dots, but that stuff was happening in my heart.

Joe: How does Pastor Jacob use these pop culture references in his sermons today?

Jacob: I wouldn’t just bring up everything I’m a fan of, but it was at the time when new Star Wars movies were coming out. So hopefully there was a connection.

The connection that it made with those who are fans of the series, even young boys who might not be paying that much attention in church, it was definitely worth it to make that connection.

I certainly didn’t preach the whole sermon on Star Wars, but in lifting up those connections – and it’s easy to do, especially with the familiar story like that, to connect something that people have already been thinking about, maybe talking about, or thinking about going to the movies . And then when we talk about those elements in church.

Joe: Not so long ago, and not so far, far away, Pastor Jacob used a Star Wars movie to help tell the biblical story of Jonah.

Jacob: We connected the new movie with the story of Jonah who experienced a little Solo time in himself… or at least he tried to.

So we didn’t wear it out, you know. It’s like…. But we did try to connect what people…. We know that thousands, millions of people around the world were watching and thinking and talking about, with a story that’s so close to our heart in the biblical story. It was fun to make those connections, and I think made it a little more tangible for some folks.

When we started the Solo series, instead of our normal (and this may have been pushing it a bit), but instead of our normal Scripture reading we had the first chapter of Jonah that came across like…. I don’t know if you’re familiar with the beginning of Star Wars movies, they sort of have an intro that scrolls across the screen in these big yellow words. So we had the Scripture with Star Wars music scrolling across the screen. I would say it surprised some people, got their attention. We weren’t making light or making fun of the story, but just trying to set the Scripture story like Star Wars is set. It’s an epic story that deserves our attention. It makes us have to think about what’s come before, which is what those words are doing. And then suddenly we’re thrust into it.

Han Solo is this guy who sees himself… He’s out for himself, right? He’s got his ship, his way of doing things. We get to watch this journey of him, seeing it modeled by others,  that he would then be willing at the end, I think about episode 4, where he’s…Han Solo is out, right? And he’s invited by Luke to be a part of what they’re up to. And he can’t even see himself as that. But something happens in him finding a way where he grabs a hold of that same…you know, he believes in the vision. He believes in what they’re up to so much that he would change the way he lives.

With Jonah we see him eventually going back and telling the city of Nineveh about God’s call to repent, but we’re left sort of like we’re left at the end of a lot of Star Wars movies, at the end of Jonah we’re left hanging. Is he going to believe in what God’s saying that God would want to save the city?

One of the things I love about Star Wars movies is you’re always left thinking, “Well, what’s happening now?” A ship flies away and there’s people that are in distress. And the question is sort of left with the viewer: Is there going to be a next group of people that steps up to be good, to do good, shine light?

Not all who wander are lost

Joe: But it’s not just Star Wars. Pastor Jacob also finds spiritual connections in The Lord of the Rings movies.

Jacob: In The Lord of the Rings when Frodo musters up the courage or finds something inside himself that says, “I’ll be the one to go,” suddenly people of every tribe and tongue and race say, “Yes, and we will join you and we’ll go with you.” That has certainly been my experience in the Christian life where I think, “Oh, I’m going to step out and do this big thing for God. Can I do that?” And just the moment that I make one small step to do that, you realize there are people around you who are going to go with you in that.

Joe: There’s something about a quest that, for many, is reminiscent of our spiritual journeys.

Jacob: It’s hard for me not to connect with a famous lines from The Lord of the Rings, “not all who wander are lost.” My church’s heart is to see people who feel disconnected from God and the church, connect with Jesus. For a long time, I think some folks felt like if I don’t have it just right and get everything in the right order, I might not be able to connect with God or be included in this community. So, I love that phrase. I see it sometimes on people’s tee shirts that are about hiking or whatever.

I think the heart of it is that our journey in the world oftentimes feels like wandering around. It’s not linear. It’s not formulaic. You get here, here and here. What I see Jesus doing is inviting people…when he invited his disciples, not even just his disciples, just those he invited to follow him. When you trace that out on a map of Israel, it is not a linear journey. It’s all over the place. I think people would say that it looked like they were wandering around, but, in fact, they were actually finding their way in the midst of that.

So it’s probably still my favorite line from that because The Lord of the Rings journey is this group walking all over the place and feeling like we’re off the path, but all along they had a hope and a vision of where they were going even though they’d never seen it before and would never even imagine themselves being in it. Then they got to experience that sort of fulfillment moment.

I wonder what sort of a tale we’ve fallen into

Joe: As characters in these stories learn about themselves through their epic adventures, we discover who we are in Christ throughout our spiritual journeys.

Jacob: Ripe through all the stories is that aspect of finding who you are. Another line that I love is Frodo saying to Samwise Gamgee, kind of his sidekick. He says, “I wonder what sort of tale we are falling into?” So they actually recognize… Frodo recognizes somewhere in the midst of that that they have fallen into a story. I think so often in our lives we miss that. We’re doing our stuff. We’re checking our lists. We’re busy going from here to there. But life really changes when you ask that question, I wonder what sort of tale we have fallen into?

The most powerful thing I’ve seen in my own life and other lives is when we realize that we’re actually in the God story. You know, that the Bible, that tale that has been told is actually meant for us to be able to see ourselves in it.

Joe: Not every part of every story fits, but there are some great themes from which we can learn and by which we can be encouraged in our spiritual journeys. Pastor Jacob sums it up well…

Jacob: I love how in Star Wars and Lord of the Rings and other great epic stories we can see so clearly that battle between good and evil, and how oftentimes the small or the young is lifted up to do great things. But so often we miss that that truth and that reality is present in our world, that actually there is still a battle between good and evil. And God’s calling us, those who feel unsuspecting, to be used in a great way.

About the Rev. Jacob Armstrong

Joe: The Rev. Jacob Armstrong is the pastor of Providence United Methodist Church in Mt. Juliet, Tennessee and is the author of several books. To learn more about Jacob, to find links to his books, and to explore some other stories about faith, movies, and culture, go to UMC.org/podcasts and look for this episode ofGet Your Spirit in Shape. You can subscribe if you haven’t already, and email me your thoughts and suggestions from there.

Thanks for listening. I’ll be back soon with another conversation to help us keep our souls as healthy as our bodies. I’m Joe Iovino. Happy Star Wars Day, and “may the force be with you!”