Rich examples of the work promoted by member churches of the World Council of Churches (WCC) in Italy in assisting refugees and migrants, have been the highlight of the first days of WCC delegation visit to the region this week. The majority of the initiatives visited are led by women.

The 2022 regional focus of the WCC Pilgrimage of Justice and Peace in 2022 is Europe. The visit is facilitated by the Churches’ Commission for Migrants in Europe and hosted by Federation of Protestant Churches in Italy.

The WCC delegation is led by Dr Agnes Abuom, moderator of the WCC central committee, and Torsten Moritz, general secretary of the Churches’ Commission for Migrants in Europe.

In Palermo, many different cultures live together, with people, histories, and nationalities from all over the world.

In this context, churches have always taken care of the poorest and most vulnerable people, often in neighborhoods with children at risk of school dropout, child migrants, women victims of trafficking, evicted persons, and people facing other grave challenges and injustices. 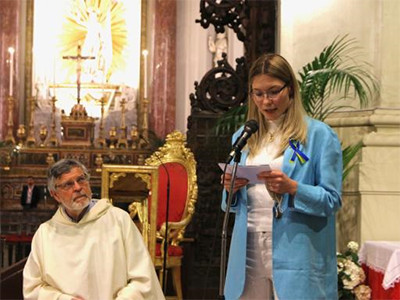 Yulia Salaviova, from Ukraine, shares her testimony during the ecumenical vigil “Solidarity in Welcome, Justice and Peace” at the Palermo cathedral. On the left, Brother Guido Dotti, member of the WCC delegation visiting Italy. Photo: Marcelo Schneider/WCC.

In May at the Waldensian Diaconal Centre, Centro Diaconale La Noce, in Palermo, the WCC delegation learned more about the church’s work on the right to housing and dignified hospitality to refugees.

The center also runs a local kindergarten, provides support for people with disabilities, and manages a guesthouse and convention center.

One of the initiatives under the umbrella of the center is Casa di Batja.  Floriana Madonia, director of Casa di Batja, a small reception center for women and child refugees placed in a secret location in the region, shared that the main goal of their work is to equip women to be integrated into the society. “Besides the legal assistance to help them to have a resident permit, learning Italian is an effective instrument in the process of building the women’s autonomy that can enable them to move their lives forward in a dignified way,” she said.

Another visit was to Pellegrino della Terra, an association that has been operating in Palermo since 1996 in the field of psycho-social assistance to protect and promote people’s fundamental rights, including the civil rights of foreigners, and to combat violence, particularly sexual exploitation of trafficked women.

Pellegrino della Terra has been providing psychological support to migrants, refugees and women victims of trafficking since 2000 through a listening center to help them escape exploitation. The association also accompanies people on an individualized path of socio-working reintegration.

In addition to starting training internships, the facility offers a recreational play area for children (95% of users are women, many of whom have children). In addition, Italian language courses for foreigners, collection and distribution of clothing, information, and territorial awareness are provided.

excerpt from a story on World Council of Churches website