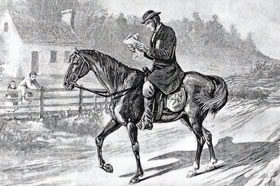 1. Who were the original Methodist circuit riders?
The correct answer is itinerant preachers who traveled a specific area preaching the gospel. Exhaustion, illness, animal attacks, and unfriendly encounters were constant threats. Methodist Church records from 1844 record a church membership of over 1 million, with 4,000 ministers riding circuits in the U.S. 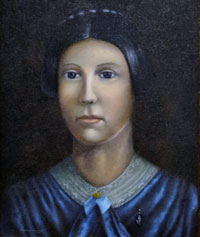 2. The first female Methodist circuit rider was:
The correct answer is Helenor Alter Davisson. Davisson was the first woman ordained in The Methodist Protestant Church by the Wabash Annual Conference (Indiana) in 1866. She often rode the Bradford Circuit in northwest Indiana.

A history of the UMC in Remington, Indiana, mentions the the Reverend John Alter and his daughter, Mrs. Helenor Draper, traveling "on horseback through miles of open prairie, tall grass, ponds and sloughs and staying in an occasional hunter's cabin or settler's crude shanty." 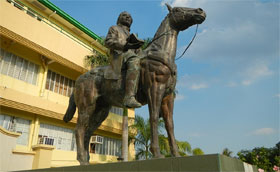 3. True or false: John Wesley believed that preachers who moved often were more effective.
The correct answer is true. John Wesley believed that itinerant preachers who moved from place to place were more effective than those who settled in, grew comfortable, and wore out what they had to say. In a letter to the Rev. Samuel Walker in 1756, Wesley wrote, "We have found by long and consistent experience that a frequent exchange of preachers is best. This preacher has one talent, that another; no one whom I ever yet knew has all the talents which are needful for beginning, continuing, and perfecting the work of grace in a whole congregation."

" Ever wonder why United Methodist pastors change churches? Read on. 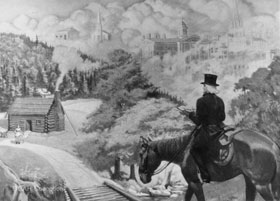 4. What does it mean to be an itinerant preacher?
The correct answer is you are willing to accept whatever assignment your bishop gives you. Appointments are typically for one year at a time, though the bishop may move any itinerant pastor at any time. The goal of the appointment process is to match as much as possible the gifts and graces of the particular pastor or deacon with the ministry needs of a particular congregation or ministry setting. In this "serial leadership" of consecutive pastors and deacons — no two are alike — over time, the combination of skills blends to form a broad base of developed ministries.

" Read more in the Glossary and watch The Hard Road of a Methodist Circuit Rider. 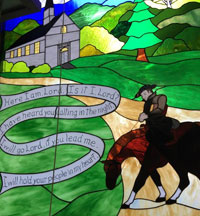 5. What is the definition of a preaching circuit?
The correct answer is a specific geographic route to new or established congregations. Especially in sparsely populated areas of the United States, it was common for clergy to serve more than one congregation at a time, a form of church organization sometimes called a "preaching circuit." In the early days of Methodism in America, a pastor — most often a circuit rider — might be appointed to half of a state or more. His appointment might be for only three months, after which he moved to another circuit. Thousands of the oldest United Methodist congregations today trace their history to a circuit rider. 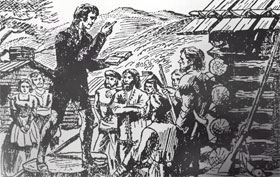 6. On a typical ride once around the circuit, the rider traveled…
The correct answer is 200-500 miles. Especially west of the Appalachian Mountains, circuit riders rode great distances between communities and congregations. They expected to visit each church on the charge at least once, and possibly start some new ones. At times, they preached every day. Some circuits were so large it took six weeks to complete one cycle. They traveled light, carrying their belongings and books in their saddlebags. Ranging far and wide through villages and wilderness, they preached daily or more often at any site available be it a log cabin, the local court house, a meeting house, or an outdoor forest setting.

" The hardships of the circuit riders even inspired new gospel music. Discover this new music. 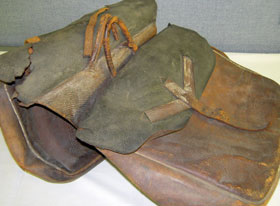 7. What were the most treasured items in a circuit rider's saddle bag?
The correct answer is books to read and sell. Often circuit riders carried copies of the Methodist Discipline for sale, as church members in the wilderness did not have access to these instructions. Also popular were John Wesley's "Primitive Physic," a practical book of home remedies compiled by Methodism's founder, and "Graces Before Meat." which included prayers before meals written by Wesley. Books were designed to fit in a coat pocket or purse to be used in church meetings and taken home for daily devotions. 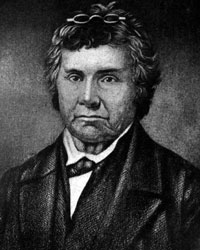 8. The circuit rider Peter Cartwright was known as…
The correct answer is all of the above. Peter Cartwright (1785-1872) was a Methodist circuit rider known for his colorful appearance, direct manner, and oratory skills. He challenged and beat Abraham Lincoln for a seat on the Illinois legislature, then lost to the future president a decade later in an 1846 bid for Congress.

Upon his retirement, he said "That with all the losses and crosses, labors and sufferings peculiar to the life of a Methodist traveling preacher, I would take the same track... with the same religion to bear me up rather than be president of the United States. I ask your prayers that you will remember an old man who has spent his long life in the service of the church. And I would do it again." 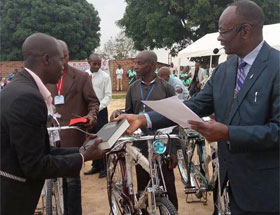 9. Pastors in Zimbabwe in the 1970s didn't have horses, so they rode circuits on…
The correct answer is bicycles. One pastor in Zimbabwe reported that the longest distance he rode a bicycle was on a circuit totaling 17.36 miles. It was impossible to visit two congregations in a week. "I would leave home on Tuesday in order to start my visitations on Wednesday. Thursdays were a day for home visits and station administration duties, while Fridays were reserved for the women's union, and meetings," says the Rev. Jairos Mafondokoto. Sunday was for preaching and meeting with church committees. He rested on Monday before setting out for the next station. This routine usually meant Mafondokoto spent three weeks away from his family, relying on the goodwill of the congregation to provide accommodations.

" Read more about how bikes extend evangelism in East Congo and what they said when pastors recall riding circuits on bicycles. 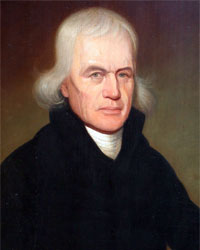 10. The preacher who rode 265,000 miles on horseback and helped grow Methodism in America was:
The correct answer is Bishop Francis Asbury, who during his 45 years of ministry rode on horseback more than 265,000, roughly the distance of riding from New York City to Los Angeles 95 times!

The Rev. Alfred T. Day III, from the General Commission on Archives and History, says Asbury "was a frontiersman and a pioneer. He could have given Lewis and Clark a map to follow before they embarked on their journey and told them which roads to take and which roads were dead ends."