A UMC.org feature by Christopher Fenoglio*

"His voice was like the thunder and we stayed there all night long. He baptized several thousand and he taught us right from wrong. Most nights he went hungry. He slept on cabin floors. But he spoke just like a hurricane on fire for the Lord."

These lyrics are from the song "Circuit Rider," which uses details from the life of Methodist preacher Peter Cartwright, who rode circuits in Tennessee and Kentucky during the mid-1800s. A powerful evangelist, Cartwright helped start the revival movement known as the Second Great Awakening in the early 1900s and personally baptized 12,000 converts. 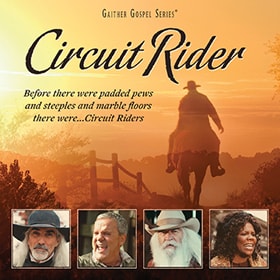 This new DVD from Gaither Music portrays the hardships of circuit riders as they proclaimed the Good News to small communities across America.

The song is included in the gospel music DVD "Circuit Rider," which uses excerpts from actual letters and journals written by the circuit riders who first brought Methodism to rural America, along with other riders who proclaimed the Good News in the wilderness.

"We started with the Methodist circuit riders and broadened out from there," says Suzanne Jennings, co-creator of the Gaither Music project.

"We wanted to find some characters that were interesting. Peter Cartwright was just such a character. He had a colorful side to him and he lived longer than most circuit riders," recalls Jennings in explaining their research for the project.

The project uses an excerpt from The Autobiography of Peter Cartwright – Backwoods Preacher (Abingdon Press) to set the stage for the title song, sung by gospel artists Russ Taft and William Lee Golden.

"What was interesting for me about the Peter Cartwright biography," says Jennings, "was his candid and transparent account of the Circuit Rider life. The writing is so honest it is almost self-incriminating at times.  He was the preacher I was thinking of when I wrote the line in the intro that states 'their methods were sometimes unusual or unorthodox.'  An extremely charismatic preacher and 'outside-the-box thinker,' Cartwright gravitated to the idea that all could be saved, and he was a firm believer that camp meetings were the vehicle through which that would be accomplished," says Jennings.

On horseback, Cartwright carried only his Bible, hymnbook and the church Book of Discipline, always ready to proclaim, "Behold the Lamb of God, that taketh away the sin of the world" to everyone who could hear his voice.

"The camp meetings where many of the riders preached proved to be very popular, leading many of the worshippers to "experience" God rather than just "think" about Him," says Jennings. "This experiential shift went hand in hand with the spirit of westward migration and Manifest Destiny that drove the new settlers in this new land.  Also the practicalities of the actual "preaching circuits" seemed to work very well in the new America," she said.

Sung by artists who have recorded other albums for Gaither Music, the songs in the project depict the trials and tribulations of the circuit riders and especially the personal faith conversions by those who listened to their sermons.

"The songs are linked together with excerpts from writings by circuit riders and the chronicles of their travels," says Woody Wright, the project's other co-creator.

The project also uses texts from historical figures to illustrate the fervent faith of the circuit riders.

"The excerpt from Susanna Wesley's letter to her son Charles is so powerful," says Wright, "that when the song starts with the downbeat, you are ready for the emotional lift you get in the song."

In her letter, Susanna writes:

This excerpt is followed by the song "I'm the Clay," a song about one's personal commitment to God and willingness to accept His word and love, thus being molded into a more Christ-like image of God. Judy Martin, Charlotte Ritchie and Tanya Sykes recorded "I'm the Clay" for the album.

The project started nearly 20 years ago when Wright and Jennings were writing songs together. As Wright recounts in a special interview of the two creators included in the project, he was inspired by a trip to a United Methodist church.

"I'm sitting here in the pew of this Methodist church," says Wright in a special interview included in the project, "and I'm wondering what little guy had to come out here riding circuit on a horse so that I could sit here in this beautiful church."

In The United Methodist church today, preachers who serve more than one church in smaller communities are still said to cover circuits. "They will have a 9 o'clock service here and then two hours later they will be in another small community. It's just amazing (to me) to think those people would do that, that they were called to do that and that they answered the call," Wright notes.

The lives of the Methodist circuit riders will live on in this music. The project is sure to be an inspiration to listeners who seek solace in their faith during trying times.

This feature was originally published February 1, 2017.

Learn more about the rural roots of The United Methodist Church. And see a series about rural churches. The frontier experience even inspired a comic book series.

*Christopher Fenoglio is Managing Editor for UMC.org at United Methodist Communications.
He may be reached by email or at 615-312-3734.