Alexis Duecker, an asylum attorney with the New York Justice for Our Neighbors office (NY JFON), has worked for two years with some of her clients to try to get their asylum cases heard and decided. In that time, she has finally seen one case conclude with a positive outcome – one successful case.

Duecker was hired by NY JFON as part of a three-year program made possible by a partnership with the United Methodist Committee on Relief (UMCOR) and Church World Service (CWS). UMCOR provides funding, CWS provides case management and referral, and JFON provides legal help for immigrants, with a focus on asylum seekers. 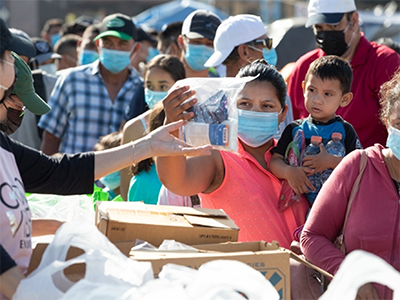 Migrants living in a makeshift camp near the El Chaparral border crossing in Tijuana, Mexico, receive food and other relief supplies from Nuevo Pacto Methodist Church and San Pablo Evangelical Church in Tijuana. Some 1,500 migrants have taken up residence there, many of them hoping to present asylum claims to U.S. immigration authorities. Photo: Mike Dubose, UMNews.

The UMCOR Asylum Project targets three sites that are destinations for many asylum seekers – Miami, Houston and New York.

Among Duecker’s clients are some from the Northern Triangle of Central America (Guatemala, Honduras and El Salvador).

Asylum seekers must prove they have either experienced persecution or have a well-founded fear of future persecution on five protected grounds: because of their race, religion, nationality, political opinion or membership in a persecuted social group.

Once asylum is granted, asylees become eligible to legally work in the U.S. and receive public benefits. After a year, an asylee must apply to adjust status and get a green card (Permanent Residence Card). Any kind of criminal issue during that time can jeopardize a person’s status.

After adjusting status, most people can apply to become naturalized citizens in three to five years. But an attorney’s job ends after the case is won, so, for asylees to understand the next steps in the process and the benefits available to them, a social worker or case manager, such as CWS provides, can be invaluable in an asylee’s journey. In addition, it is not uncommon for asylees and other refugees to experience Post-Traumatic Stress Disorder (PTSD), even after their cases are won. 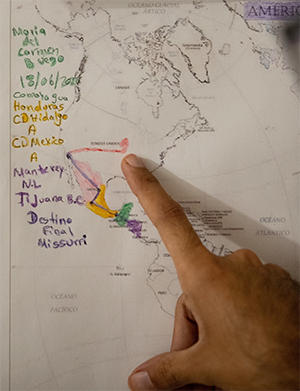 Psychiatrist Christian Romero displays a depiction of a migrant’s journey from Central America to the United States at Centro 32 in Tijuana, Mexico, an advocacy campaign devoted to reuniting immigrant families that were separated at the US-Mexico border. Migrants sketch out their journeys as a form of art therapy. Photo: Mike Dubose, UMNews.

Although the journey is long and requires patience, Duecker said she finds her work rewarding. “I feel blessed honestly, to have a job in which something I do changes someone’s life forever for the better. My clients are very inspirational to me.”

In the last few months of 2021, more of her clients are receiving hearing dates, though one scheduled for November was unexpectedly rescheduled for 2023. Still, she is hopeful the hard work will pay off with more successful outcomes in the near future.

Meanwhile, more work must be done to remove the mechanisms put in place specifically to prevent people from claiming asylum. “We have an obligation, if not to grant asylum, at least to allow people to claim asylum,” Duecker said.

Restoring that long-held tradition in the United States is a right that individuals and congregations of many denominations and religions can advocate for together. Gifts to Global Migration Advance #3022144 help to make this work possible.