Editor's note: September - October 2021 is the 250th anniversary of Asbury's Crossing. Learn more about the events in England and the U.S. marking this occasion.

“Are we nuts for doing this?” Ted Lasso asks his assistant coach during the pilot episode of the Apple TV+ series Ted Lasso. The American football coaches are midflight from Kansas to England where they will lead a Premier League Football (soccer) team.

On September 12, 1771, 250 years ago, Francis Asbury was traveling by ship in the opposite direction. That day's journal entry appears to indicate he was asking similar questions.

“Whither am I going?” the young lay preacher writes. “What to do?”

In his own words 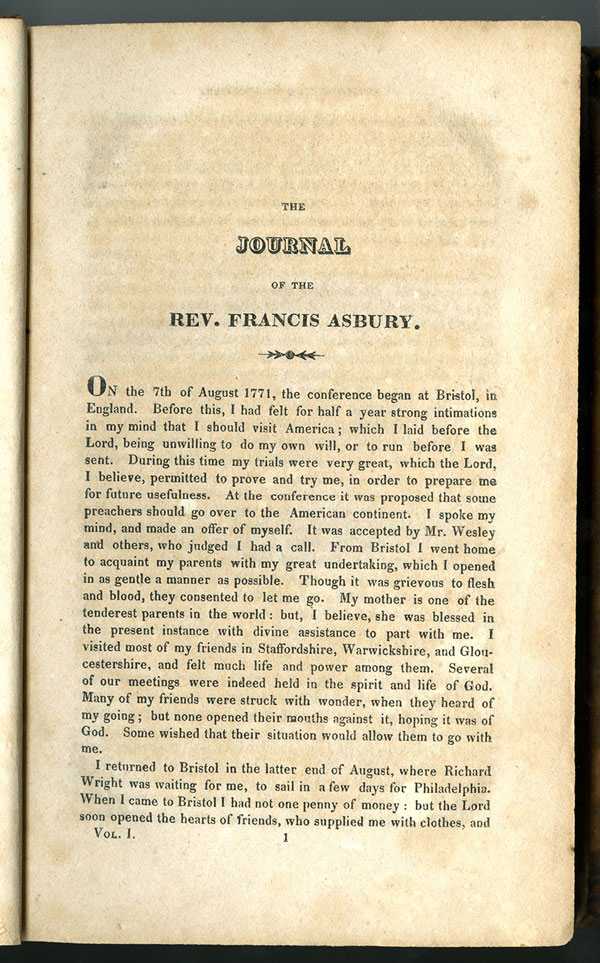 Francis Asbury’s published journal begins with his telling of how he was selected to go to America. Image from 1821 version at Bridwell Library, Perkins School of Theology at Southern Methodist University.

For months, Asbury had been feeling the nudge of God to take on a new challenge. “I had felt for half a year strong intimations in my mind that I should visit America,” he wrote in his journal (Aug. 7, 1771).

So when John Wesley proposed during the 1771 Methodist Conference that some should cross the Atlantic, Asbury volunteered. Wesley affirmed his call, and several weeks later, Asbury boarded a ship in Pill bound for Philadelphia in the New World.

After about a week at sea, Asbury, like Lasso, appears to be having second thoughts.

He was a 26-year-old lay preacher going somewhere he’d never been, to do something he’d never done. Undoubtedly, he knew others who appeared more suited for the task. There were preachers with more experience; those who were more qualified for the work to which God called (and Wesley assigned) him.

A neighbor needs someone to talk to and we think, “I’m not a counselor. Others are more experienced.”

We feel the nudge to share our faith with a friend, but tell ourselves, “I’m not a Bible expert. Maybe I should leave that to those who are more qualified.”

We feel God’s prodding to do something about a neighborhood problem, but wonder if one person can really make a difference.

Will we continue to follow the call or shrink before its challenges?

The Asbury Crossing: Responding to Call is a series of events in the U.S. and Britain to commemorate the 250th anniversary of Francis Asbury's journey from England to America. Logo by United Methodist Communications.

That last sentence became a mission statement Asbury lived into from that day forward.

Until his death in 1816, nearly 45 years after that journal entry, Asbury traveled America on horseback, living to God and inviting others so to do.

As a founder and the first bishop of the Methodist Episcopal Church, one of the predecessor denominations of The United Methodist Church, the mission God gave Asbury continues to this day.

Taking on a challenge

After his brief exchange with Coach Beard, Lasso pauses before responding. “Taking on a challenge is a lot like riding a horse,” something Asbury knew quite a bit about. “If you’re comfortable while you’re doing it, you’re probably doing it wrong.”

Learn more about the 250th anniversary of Asbury's Crossing.