Are United Methodists really that different than other denominations?

Rethink Church · Are United Methodists Really that Different from other Denominations?

Most Christians profess to a belief in the following statements:

I believe in God, the Father Almighty,

creator of heaven and earth.

I believe in Jesus Christ, his only Son, our Lord,

who was conceived by the Holy Spirit,

born of the Virgin Mary,

was crucified, died, and was buried;

he descended to the dead.

On the third day he rose again;

he ascended into heaven,

is seated at the right hand of the Father,

and will come again to judge the living and the dead.

I believe in the Holy Spirit,

the communion of saints,

the forgiveness of sins,

the resurrection of the body,

and the life everlasting. Amen.


United Methodists affirm these statements, as well. In fact, the above creed–the Apostle’s Creed–or a derivation of it, are spoken in many United Methodist worship services.

The United Methodist Church itself was born out of divergences and mergers of other Christian groups. Notably, Methodism was a movement begun in the Church of England in the 1700’s. Many of the Anglican Church’s practices are still evident in United Methodist practice today.

The origins of Methodism

A group of revivalists, including John and Charles Wesley, began a renewal movement in the Church of England in the early 18th century. Their hope was to live out a personal expression of faith that impacted the world around them. With this aim, they concentrated on both the work of God and the work of the believer. Their challenge was to live their faith through action.

The Wesley's, and John in particular, challenged believers to live out their sanctification. Sanctification is the process by which a believer is conformed to the image of Christ. The early Methodist groups, and expressions of Methodism since, placed a heavy emphasis on providing relief to the poor, caring for the ill, visiting prisoners, and disrupting the cycles of brokenness and injustice in their communities.

The Wesley's believed that humanity was born into sinfulness. But God interrupted, or disrupted, our sinful cycles of harm through the life, death and resurrection of Jesus. If the faithful are to conform to the image of Jesus, then our faith compels us to interrupt the cycles of harm, too.

Emphasizing a belief that faith is a personal endeavor, the early Methodists organized into small groups, which met for prayer and study and spiritual accountability. These groups often challenged participants to recount the ways in which they had been living out their faith. 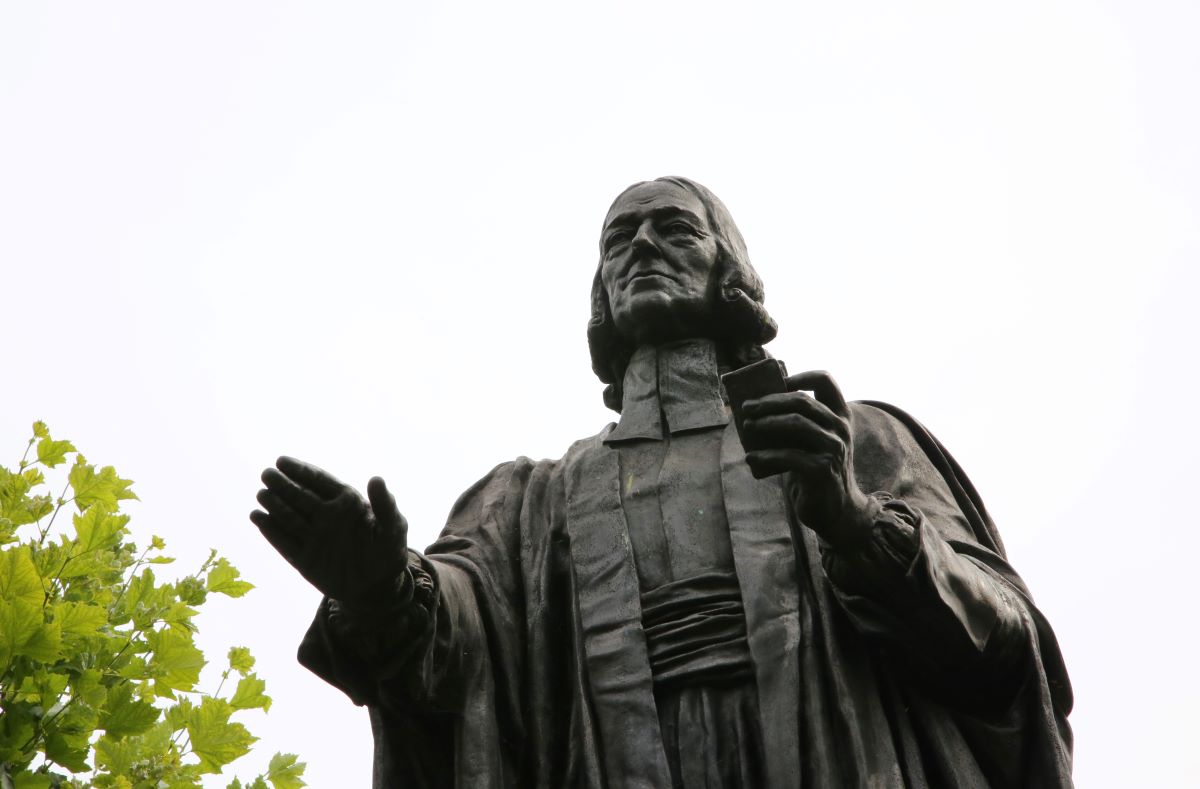 Faith is personal, but it is not private. Jesus admonished his early followers to love God with all their hearts and to love their neighbors as they love themselves. The Wesley’s pushed for more expressions of this latter directive: our faith is exemplified in the way we love others. John Wesley once famously noted: “There is no holiness but social holiness.” We are meant to express our faith in community with others.

United Methodists live out an active faith through ministries of care, like the United Methodist Committee on Relief or Justice for Our Neighbors. They seek to display care for others through attention to social justice issues, such as fighting poverty and promoting education and healthcare. This emphasis on education and healthcare is why there are so many institutions that include “Methodist” in their names–many of them were founded by Methodist organizations.

Caring for neighbors is an expression of grace. Grace is God’s unmerited love and favor towards humanity. It is freely given to ALL people, regardless of their circumstances or actions.

Grace is not earned. It is a gift and is present in our lives even before we are aware of it (United Methodists call this “prevenient grace”). It is through God’s grace that humans are transformed and empowered to live in ways that extend God’s love.

United Methodists practice other rites and proclaim other means of grace. Confirmation, marriage and ordination are all part of church life, but are not considered sacraments. While regular worship, prayer and service to others are more ways we can encounter and share God’s grace.

A big tent of beliefs

It is difficult to describe United Methodist beliefs because the diverse and inclusive nature of the church. As an international church, the United Methodist Church represents a wide range of backgrounds, experiences and perspectives. And because personal experience is foundational to United Methodist theology, this often leads to differences in areas like scriptural interpretation and theological formation.

The United Methodist Book of Discipline outlines the doctrine and governance of the denomination. The Discipline is like the constitution of the organization, and it organizes church governance into three distinct bodies: executive, legislative and judicial.

The executive branch is comprised of United Methodist bishops, who have authority over the churches in specific geographic regions. There is no single person who is a leader of executive branch. The bishops do elect a president of the Council of Bishops, but this person acts as more of a spokesperson and is not permitted to make executive decisions on behalf of the church.

Decisions regarding church polity and practice are made by the General Conference, which represents the legislative branch. General Conference meets every four years. It consists of elected delegates from each geographic region of the Church.

The Judicial Council and its subsidiaries comprise the judicial branch of United Methodist governance. They are responsible for interpreting and enforcing denominational policy and regulations and for resolving conflicts and disputes within the denomination.

There’s much more to learn about the United Methodist Church!