A UMC.org feature by Christopher Fenoglio*

Kaycee Quarry looked at her son sitting at the kitchen table, thumbing through his United Methodist Hymnal. She asked, "Warrick, what do you plan to do when you grow up?"

Warrick looked up at her, flashing a large, toothy grin, and said, "What do you think? Choir director!"

His mother smiled a knowing smile and said to herself, "I thought so."

Most of the congregation at the Poteau First United Methodist Church in Poteau, Oklahoma think so too. They have watched Warrick Quarry grow up in and around the church choir for most of his young life. 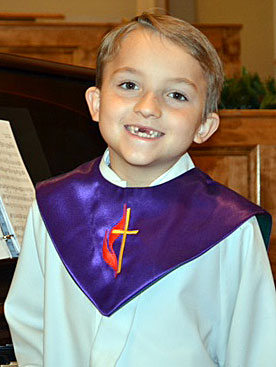 Warrick Quarry's love of music moves him to serve his church as a choir member. Photo courtesy of Kaycee Quarry.

When he could stand on his own, Warrick would attend services in the second row next to his grandmother while his mother worked in the nursery. Warrick would stand in the pew and sway to the music.

As he grew a little older, Warrick would leave the pew and stand in the middle of the aisle, dancing as the church choir sang.

Later, the four-year-old Warrick began to notice the choir director as he stood in front of the choir and used hand gestures to lead them through each song. That was all Warrick needed to see; he began "directing" the choir from his seat in pew on the second row.

One Christmas when Warrick was chosen (along with seven girls) to sing a song for the church's youth program, Warrick focused on what he wanted the most. "Mama, I'm not singing with all of those girls,” he told her. “I'm going to direct instead!"

When Kaycee asked the children’s music director what she should do, she received a lot of support. "Let him direct," said the director. "Encourage him to do what he loves."

A day before the Christmas program, Warrick received a gift from one of the high school band directors: an old baton. Once the program began, there was Warrick in front of the seven girls in the preschool choir, waving his baton just like the director. He even gave them a sharp cut off at the end.

Fast forward to 2015 when the church choir began rehearsing their upcoming Christmas cantata. Eight-year-old Warrick often spent weekday afternoons with his mother at church. They began staying later on Wednesdays in order to listen to the choir practice. Soon Warrick was sitting in the midst of the choir for the entire practice. Finally, he decided that he wanted to sing the cantata as a member of the choir.

On the day of the cantata, his mother found the smallest acolyte robe she could find and used safety pins to make it fit just right. She even found a purple sash that fit his small frame.

That morning, as the organ began to play, the entire choir walked out into the choir area. Joining them was the tiny boy at least 30 years younger than any of them. Warrick stepped up on a wooden box and sang the cantata like a seasoned veteran.

“Where some kids have Batman or Superman or baseball players as their heroes, the people in the church choir are Warrick’s heroes,” says Mary Lynn Perkin, director of music at Poteau United Methodist Church. 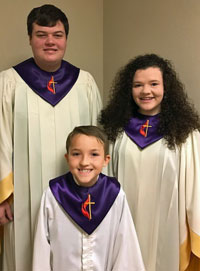 Warrick Quarry, who turned ten-years-old in 2017, continues to sing in the choir, now joined by cousins McKinlee and Kennedy Thomas. Photo by Kaycee Quarry.

“He memorizes and internalizes everything about worship each Sunday. He can even tell you what anthem we sang the last time I wore my pink shirt. But it's not his crazy knack for remembering things that makes you love him. It's the passion he has to serve through music and song.”

His passion for music moves some church members to tears when they thank him for singing in the choir.

“We all need a little bit of that passion at times,” says Perkin. “It's a young, enthusiastic boy who reminds us why and who we serve each Sunday. Any choir is blessed to have someone that loves God so strongly, no matter what age they are,” she says.

Warrick still attends practice most weeks and sings with the choir every Sunday. According to his mother, many thanks have to go to his director and choir members who encourage him every day.

“I can't tell you how happy and proud this makes me,” says his mother. “Warrick has such a great love for church and his choir. He could teach others a few things.”

One thing Warrick teaches us is how to live out the lyrics of “My Life Flows On” (#2212 in The Faith We Sing): “Since love is Lord of heaven and earth, how can I keep from singing?”

*Christopher Fenoglio works for UMC.org at United Methodist Communications. Contact him by email or at 615-312-3734.