"In my language, Shona, my name Tinashe, means God is with us. I believe that when my parents gave me that name, they were seeing hope," says Tinashe Tembo, World Communion Scholarship recipient and the firstborn of five boys in his family. Born and raised near Zimbabwe's capital city, Harare, Tembo remembers the financial struggles that he experienced. "I recall being sent home from school to collect school fees from my parents because the little my father earned was not enough to sustain my education and my siblings who proved to be academically gifted as well. Sometimes I had to work part-time during the holidays to complement my father's efforts," continued Tembo. 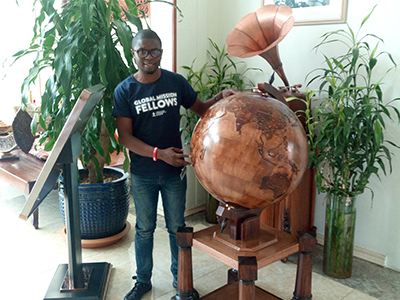 True to Tembo's given name, Tinashe, God was with him and a promising future was on the horizon. "The United Methodist Church gave me hope through its moral and financial support when life was tough," says Tembo. After graduating with a Bachelor's degree in 2015, Tembo worked for the General Board of Global Ministries in Kenya as a project coordinator through the Global Mission Fellow program. "The work I did influenced the choice of my current studies. It exposed me to global development work and I am learning to appreciate the importance of human rights and development," expressed Tembo.

During Tembo's work with Global Ministries, he learned about the World Communion Sunday Leadership scholarship. Today, Tembo is working on a Master's degree in Human Rights, Peace, and Development. "Because I received the World Communion Sunday scholarship, the training that I am receiving at Africa University is broadening my understanding of human rights issues and is equipping me with the necessary knowledge I need to achieve my life's goal.  Initially, I was focused mainly on child rights but now I am exploring other vulnerable communities as well. It is also preparing me to be a Human Rights specialist who will contribute to the promotion of the rights of vulnerable groups and also influence a human rights approach to policies and development. I would like my career to indirectly remind people that we were all created in God’s image, and we should treat each other with respect and dignity," explained Tembo.

Thank you for your generous gifts to the World Communion Sunday offering. Your gifts you equip gifted, qualified students from around the globe to become the world changers God created them to be. Give today!