The Loss of Turtle Island was a poignant historical journey that opened the eyes, ears, minds and hearts of those who experienced it on Sunday evening, Nov. 12, at Innabah Camp & Retreat Center.

Sponsored by the Eastern PA Conference Committee on Native American Ministries (CONAM), the interactive exercise posed a striking scene, as about half of the 50 people who came stood shoeless on a patchwork of colorful blankets. They stood on behalf of Native peoples who have suffered loss of land, colonization, broken treaties, forced removal, assimilation and extermination. And facing forward, they silently listened as a team of CONAM facilitators recounted this largely unknown American history.

Your offering on Native American Ministries Sunday supports work of CONAM in your local conference.

It was riveting to see this human exercise unfold. But to learn the stark truth underlying its disturbing symbolism required one to listen to the words being read, accompanied by visual slides on-screen. The words spoke of brutal violence, of heartless exploitation, of rampant conspiracy and cruel dehumanization, all inflicted on Native Americans by Europeans who came as invaders, conquerors, colonizers and land-grabbers, claiming white supremacy and America's dubious manifest destiny. 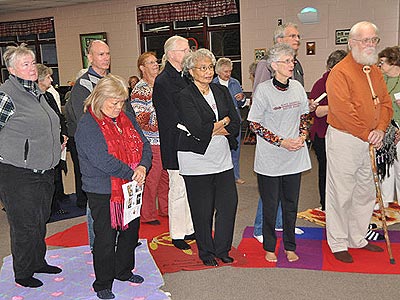 The words spoke of suffering but survival, of capitulation but compromise, of forced removal but fierce resiliency. They were words of and about Native people who were here first but became last, who were pushed off their fertile lands and onto barren reservations, pushed into boarding schools for assimilation, pushed out of history books, except to appear as villains and caricatures, and finally pushed into the dim margins of America's conscience—out of sight, out of mind.

The words and the history undergirding this solemn Loss of Turtle Island exercise were the real source of painful expressions around the room. That history includes the frequent complicity of Christian churches that accommodated or even conspired with various militaries and governments to promote immoral edicts like the malignant Doctrine of Discovery.

The Mennonite Church, which studied and repudiated this antiquated doctrine, defines it as "a philosophical and legal framework dating back to the 15th century that gave Christian governments moral and legal rights to invade and seize Indigenous lands and dominate Indigenous Peoples." The United Methodist Church denounced it in 2012 and again in 2016. ("Doctrine of Discovery," 2016 Book of Resolutions, #3331)

Four Eastern PA CONAM leaders met with Mennonite leaders in May at their national offices in Akron, Pa., for a seminar to learn more about the Doctrine of Discovery. Although widely rejected, it is still used to support legal judgments related to property ownership and acquisition in U.S. courts. The CONAM leaders were trained to facilitate the Loss of Turtle Island exercise.

"This exercise of participating in the historical overview of our country's abuse of Indigenous people was sobering," said Bishop Peggy Johnson, who wore a t-shirt given to her that read, "Make America Native Again."  "Yet it brought with it a thread of hope for a future when people who have learned the stories can create a new and just day in the future. We need to be students of history in order to walk in the right direction going forward."

When you give generously on Native American Ministries Sunday, you equip seminary students who will honor and celebrate Native American culture in their ministries. You empower congregations to find fresh, new ways to minister to their communities with Christ's love. Give now