Wiley participated in the first interracial debate in 1930 and defeated the reigning National Champions from University of Southern California in 1935, inspiring the 2007 Great Debaters movie starring Denzel Washington. "Pi Kappa Delta did not recognize the 1935 win because Wiley was a Black College, and Denzel was so impressed with the story that he donated a million dollars to restart the program at Wiley in 2008," reports Chris. Wiley won the first "recognized" national title as an HBCU at the Pi Kappa Delta National Championship in 2014, took second place in 2015, and won outright this year.

Ironically, the AFA (American Forensics Association) Championship Award ceremony took place in April this year – the anniversary of the death of Martin Luther King, who fought for equality of African Americans. "Wiley College is a Methodist school and an HBCU (Historically Black College & Universities) with a population of 1,200," notes Director of Forensics Chris Medina, "yet our debate team was competing against schools with upwards of 50,000 students and we won! Debate was never designed for minority students, yet Wiley has excelled and is a shining example of Dr. King's legacy." 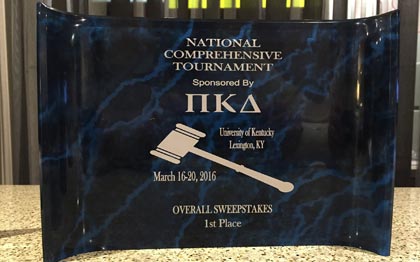 In the recent "all star" tournament of champions at The American Forensics Association National Individual Events Tournament, Wiley sent seven students to compete in 29 events and had finalists in three events, winning 8th place overall. "It was only our fourth time to compete and we were going against schools with teams of 20 or more," notes Chris.  Aside from the incredible portfolio of awards, Chris is personally moved to know these gifted students and learn of their backstories. "Our most prolific speaker is Austin Ashford, who has won 21 national titles," he shares. "Austin did not graduate from high school in the traditional way earning his GED, he experienced homelessness and incarceration in his past, yet he fought this adversity back and earned a full scholarship to acting school at the University of Arkansas."

"Our secret to success is two-fold," says Chris. "Continuing the legacy means so much to the students, which builds an incredible support system for the team, year after year. Secondly, this expectation drives the students to be better and to be overcomers when they face issues other students don't have to deal with."

Adds Austin, "If it wasn't for God and Wiley College I would not be going to grad school in the fall, as the first alum to pursue a creative writing and acting degree on scholarship. My family is over the top with excitement about my graduation since it will be my first graduation. Considering where I started in life, this success is clearly a gift from God and I thank Him daily."