For many, Ascension Day will go relatively unnoticed. Forty days after Easter is just another Thursday with many of us in our ordinary weekday routines. The event it celebrates, however, is an important episode in the life of Jesus that the church has regarded highly through the years.

Luke tells the story of Jesus' ascension both at the end of his gospel (Luke 24:50-53) and the beginning of his writing about the early church (Acts 1:9-11).

Centuries later, our United Methodist forebear, John Wesley, emphasized the day by including it as one of three non-Sunday holy day observances included in his Sunday Service of the Methodists in North America—a forerunner of our Book of Worship. The other two are Good Friday and Christmas.

The Ascension has been an important doctrine of the Christian church through the years. Image by an anonymous artist, via Wikimedia Commons.

Wesley also retained language about the Ascension as part of the Articles of Religion of the Methodist Church, which he edited from the Church of England. Echoing the creeds, Article III states, "he ascended into Heaven, and there sitteth until he return to judge all men at the last day."

Charles Wesley, John's brother and hymn writer of the early Methodist movement, published a pamphlet of seven Hymns for Ascension Day in 1746 and several more hymns on the Ascension that appear in other volumes of his work.

"Hail the Day That Sees Him Rise"

Interestingly, we have no sermons on Ascension Day from John Wesley, and his Explanatory Notes on the New Testament offer no commentary on the account of the Ascension in Acts and little on the verses in Luke. Most of what we know about the Wesleys' teaching on the Ascension comes from Charles's hymns.

Our United Methodist Hymnal contains a Charles Wesley hymn titled "Hail the Day That Sees Him Rise" (312). The lyrics for this hymn, an adaptation of Charles's "Hymn for Ascension-Day" published in Hymns and Sacred Poems (1739), offer insight into the importance of this day.

Charles begins acknowledging the Ascension as both the ending of Jesus's physical presence on Earth and his return to his rightful place in heaven.

"Hail the Day that Sees Him Rise"

Hail the day that sees him rise,
Ravish'd from our wishful eyes;
Christ awhile to mortals giv'n,
Re-ascends his native heav'n!

Our United Methodist worship resources explain, "The language of Ascension is, primarily, language of enthronement. It is Jesus ascending to his full authority."

John Wesley included Ascension Day in the Sunday Service, because it "marked not just something about Jesus or the church, but about the scope of salvation for the whole universe," the worship resources continue. Jesus "ascended to heaven to assume the fullness of his reign."

In verse 2, Charles Wesley expands on the theme of enthronement.

There the pompous triumph waits,
"Lift your heads, eternal gates,
Wide unfold the radiant scene,
Take the King of Glory in!"

As we sing these lyrics, we worship Jesus who "sitteth at the right hand of God the Father Almighty." We acknowledge Jesus in his role as Lord over all the earth.

As Jesus ascends to his throne, however, he does not abandon us. Verse 3 of "Hail the Day That Sees Him Rise," which is adapted from verse 4 of Wesley's original text, reminds us that Jesus is not leaving us alone. Wesley writes,

Him tho' highest heaven receives,
Still he loves the earth he leaves;
Tho' returning to his throne,
Still he calls mankind his own.

Jesus' connection to Earth and humanity remains. He is not absent, but continues to love and claim us. 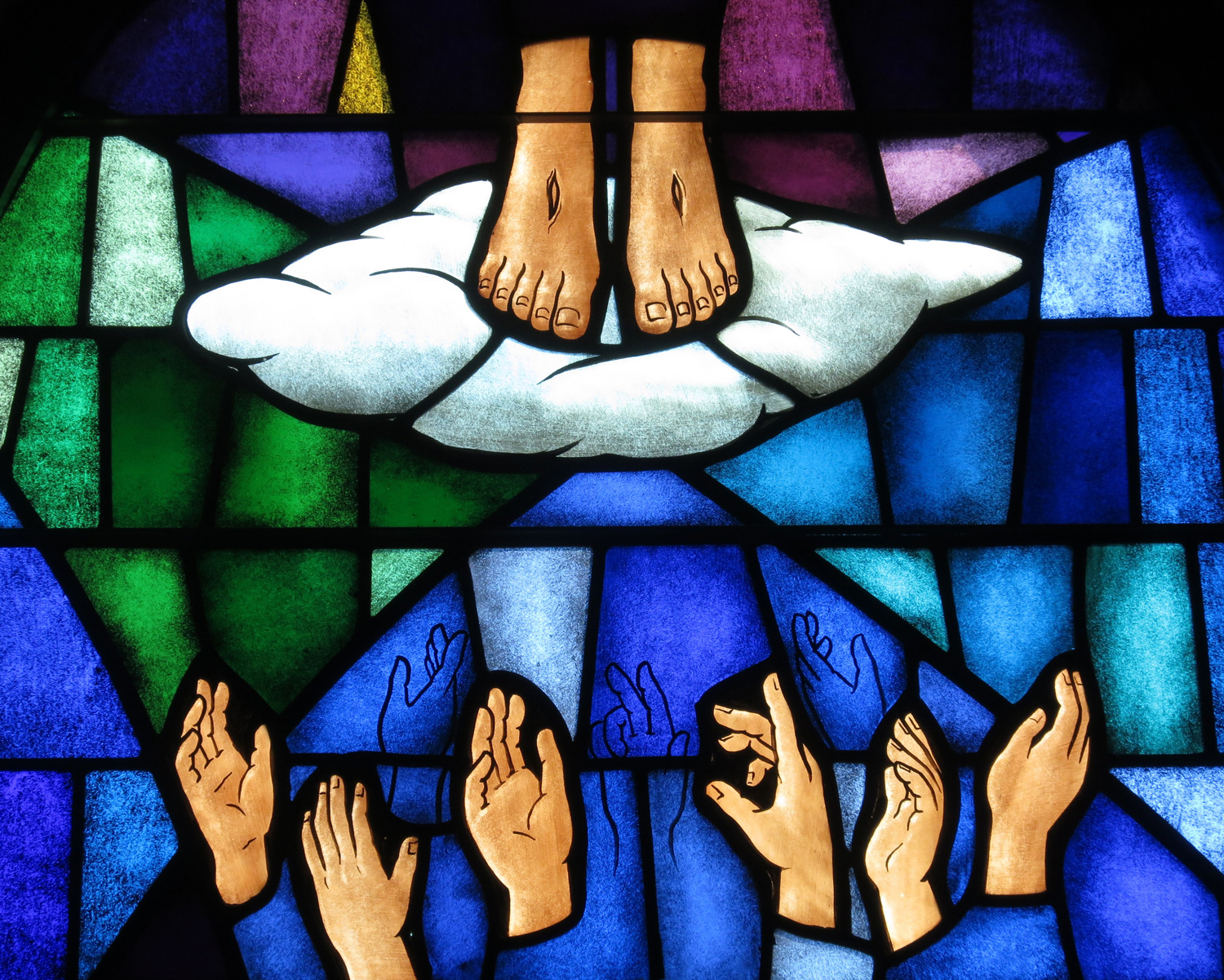 Charles Wesley notes that when Jesus ascended into heaven he retained the wounds of his crucifixion. Photo by Nheyob, CC-BY-SA-3.0, courtesy Wikimedia Commons.

The hymn concludes in The United Methodist Hymnal (Wesley wrote 10 verses) with a description of Jesus's humanity being received into the realm of God. Jesus ascends to his rightful throne bearing the scars of the crucifixion.

See! He lifts his hands above!
See! He shews the prints of love!
Hark! His gracious lips bestow
Blessings on his church below!

The Ascension affirms that we as the church are also accepted into heaven with Jesus (see Ephesians 2:6).

While much of the world may see Ascension Day as just another Thursday, United Methodists can celebrate. With John and Charles Wesley, we remember that Jesus ascended to heaven where he took his rightful throne as Lord of the whole earth. Though he is not bodily present, he continues to love us, and longs to receive us into the presence of God to dwell with him throughout eternity.