What's a parent to do? There's an atheist in the house

My 24-year-old daughter loves staring at the stars, growing roses (which I water) and dreaming about attending art school in England. She is crazy about dogs. Crazy about drawing. And will always remain crazy about Harry Potter.

But the Father Almighty, maker of heaven and earth, and of all things visible and invisible? Well, she is not too crazy about this "God thing."

When she was 15, she told me she was an atheist. I was not shocked. I was not emotional. I just rolled my eyes and smugly said, "Well, God isn't finished with you yet." I was certain that her "lapse" in faith would not last long. She would "get over it" just as she had gotten over Beanie Babies, alternative rock bands and her nasty obsession with wearing all black.

Turned out that the whole ordeal was indeed a growing pain, but mine, not hers.

"I can remember being wary of organized religion, even when I was quite young," she said. "Something felt 'off.' When I was a bit older, I'd notice that everyone around me was clearly feeling something that I could not. They had a tangible relationship with God. They could hear his voice; they could feel his presence. I felt nothing. I thought I was broken. But I kept praying because I thought it was what I was supposed to do.

"Accepting my beliefs — or nonbelief — took me a long time because I was scared of disappointing my parents, and I was scared there was something wrong with me. I felt ashamed."

So what are parents to do? Her dad and I debated with her. Preached to her. Reasoned with her. We used everything from theological documentation and Scriptural assurance to Sunday school lessons and counseling with the youth director — all to "prove" our point. There is never a "winner." In the end, if there is an end, we simply decided to love her and support her life journey into herself.

Fight temptation to debate and preach

Some would say we failed not only God, but also our child. The Rev. Kenda Creasy Dean, United Methodist pastor, author and professor of youth, church and culture at Princeton Theological Seminary, understands the frustrations both parents and children face when their religious worldviews do not match. 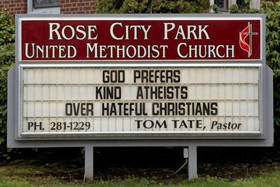 The goal was to start a conversation, explained church administrator Kay Pettygrove. "We wanted to share our message, 'Kindness is better than hatred.'"

The church has received criticism but also compliments. "I've been told many times," Pettygrove said, 'even though I'm an atheist, I would still come to your church.'"

"I've fallen into all the traps," Dean said. "The feeling of failure is real. So is embarrassment. So is fear and the temptation to debate and preach."

Dean's experience with research reveals that during high school, kids are most likely to mirror their parents' faith. However, what many young people see in that mirror is that their parents "don't give a hoot about faith." They do not make it a priority.

"A majority of young people hold to a benign 'whatever-ism' when it comes to religion,'" she said. "They believe that religion helps them to be nice and helps them feel good about themselves, but that God pretty much stays out of the way." Much has been made of the increasing numbers of young adults — about one in three — who are religiously unaffiliated.

Dan Arel, author of Parenting without God, is "one of them." Raised in an evangelical church, heavily involved in his church growth and nurtured by a deeply religious mother and churchgoing father, Arel began to explore beyond church pews.Study after study shows Americans are not very open-minded when it comes to atheists. In fact, they "strongly distrust and fear" — even using the word "threatened" to describe nonreligious people.

'This is your journey'

He asked many of the questions young adults are asking today: Is anybody listening? Where is the person who should be helping us? What happens when we die?

He expects his own son, now 3, to have many of the same questions. Arel will give him the unconditional freedom his parents offered: to explore and find his own way to whatever he chooses to believe.

"I know far too many atheists who have been shunned by their families," he said. "[The parents] feel shame for what their kids believe."

Christian parents, Arel has found, seem most afraid of what their children will not have if God is absent from their life — comfort, endurance and a place in heaven.

"It's very scary for a parent to think their child will go to hell," the journalist has learned. "They worry people will think their child is 'lost,' their social status will be tarnished or others will be judgmental about what is going on in their house."

They especially worry their children will not have a purpose in life. However, "life has the meaning you bring to it," he said.

Dean, a Christian, and Arel an atheist, share a philosophy: It is not a parent's job to make their children over into their own image religiously. Parents cannot teach their children what to think, just how to think.

The parent/child bond should not be broken because they have different worldviews," said Arel.

Consider this advice if you and your child are struggling with faith and non-faith.