What makes a meaning-full gift? It's care, not cost

Giving cost-free gifts isn't always about low budgets or Scrooge-like reputations. Instead, freebies can be about kindness, memories, and creativity.  Thought-full-ness. Gifts of meaning and not money are bestowed out of gratitude for the difference someone has made in your life, or to make a difference in the life of another.

A cotton ball is the best gift Ellen Troy McNish, a member of Christ United Methodist Church, Franklin, Tenn., said she ever received. After Ellen's mom Dee died, distance kept her from helping her brother and sister organize their mother's belongings. When her brother, Paul, surprised her at Christmas with a small wrapped box, Ellen couldn't stop sniffling.

"Inside there was an ordinary cotton ball, but it smelled familiar," she said. "It smelled like my mom."

Apparently, Paul found the box with its scented puff while sorting through his mother's closet.  It had a note inside, "Lest you forget me."

"My mom's signature scent was Interlude," Ellen said. "Mom had spritzed the cotton ball with a memory she knew would bring back memories for her children."

"Every once in a while I'll open the box and the scent brings my mom right back to me," she said. "I remember her warmth, the feel of her skin—it's like being in her space again."

Kathleen King, who attends Brentwood United Methodist, Brentwood, Tenn., also remembers how a gift from her mother helped get her through a particular holiday season. 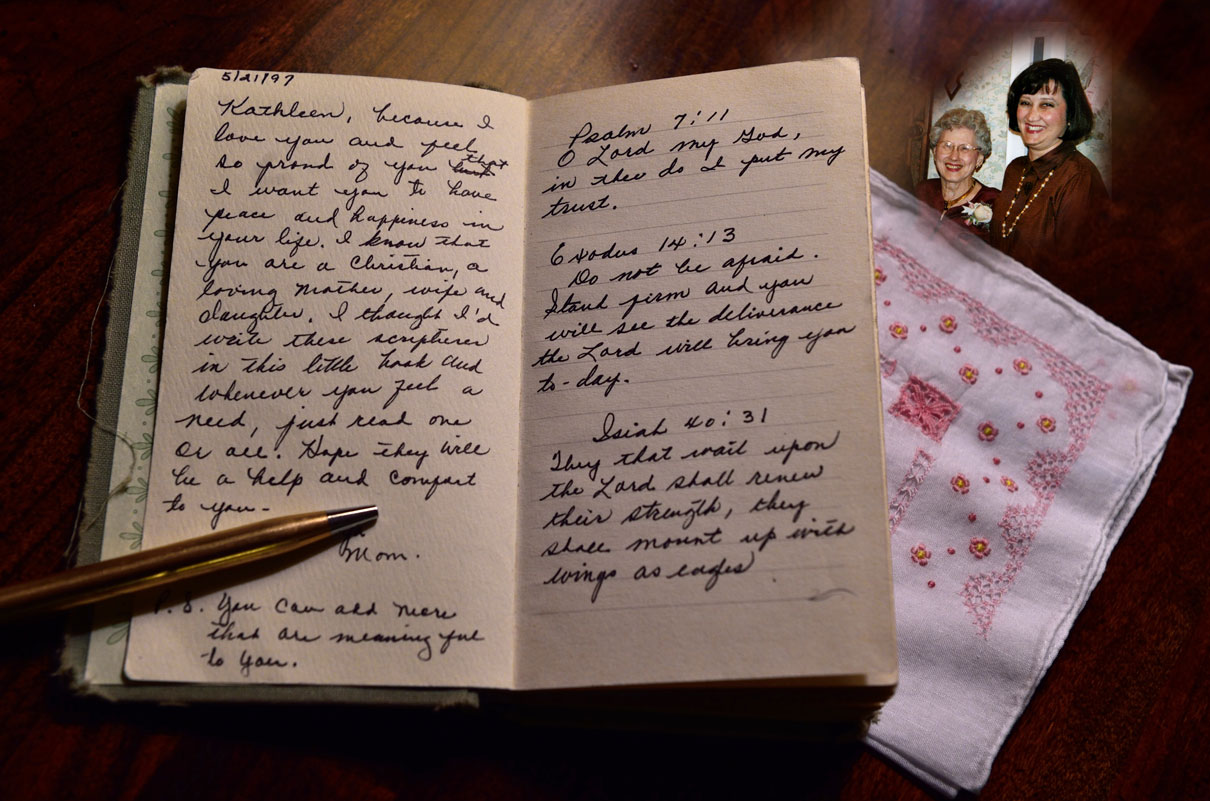 Kathleen King received a journal of encouragement from her mom. Photo courtesy of Kathleen King.

"Years ago, during a difficult time in my life, my mom gave me a little pocket-sized journal." Kathleen said. "Inside the cover Mom wrote an affirming note and included several Scripture verses on the first few pages. Each Bible verse was chosen to give me hope and encouragement."

The pages in the rest of the book were left blank so Kathleen could fill them with verses, poems, notes, and "whatever I found along my way."

Childhood was a difficult time for Kathy Dozier. Abused by her father, she tried to stay away from home as often as possible, and frequently found refuge within her youth group at City Road United Methodist Church, Madison, Tenn.

Later in life, when Kathy found out she was unable to have children, she took on the role of Santa Claus to her eight nephews. One year her nephew Jason had a present for her—for once the receiver instead of the giver. The gift was her tattered youth Bible missing for more than 20 years but found by Jason while he was attending vacation Bible school. In one of the margins, Kathy had written, "I do believe."

"I broke into tears," Kathy said. "As I flipped through it, I remembered the people in my church family that took care of me during some very hard times. I've never received a gift so important to me."

Many of the best gifts are blessed surprises crafted with love by family members and friends. Fifty-plus years ago, young Sandie Funke never expected a Christmas gift at all. She and her five brothers and sisters were used to doing without over the holidays. 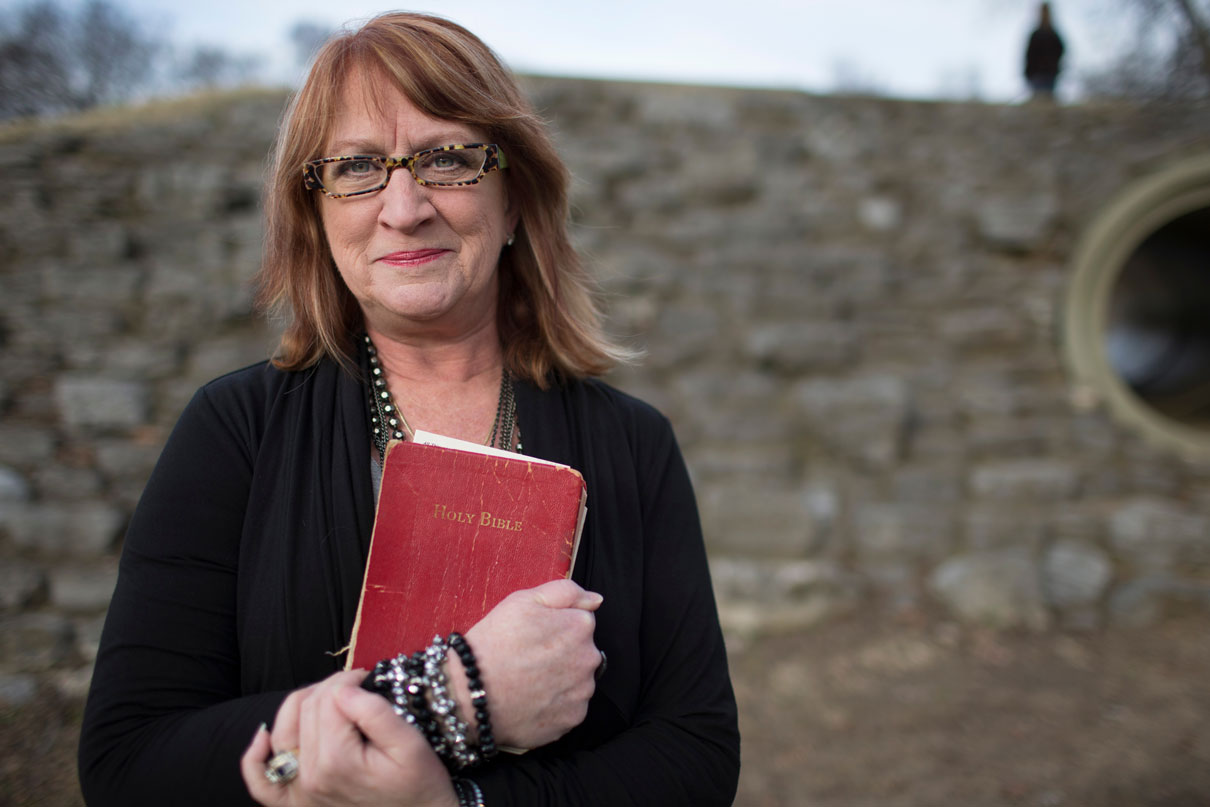 Kathy Dozier holds the precious gift of the long-lost Bible from her youth. Photo by Mike Dubose, United Methodist Communications.

Still Sandie's mother, Eva Mae Reynolds, always found a way to scrape together a Christmas dinner and to find a tree her children could decorate.

"We had many Christmases like that," said Sandie, a lifelong member of Elkton United Methodist Church, Elkton, Md. "We weren't sad. In fact, I never even realized I was poor."

One year, 8-year-old Sandie watched as her mom spent the months leading up to Christmas hand-making doll clothes for a neighbor's daughter. Understandably, she envied the gowns made of sheets and white lace, stitched by her mother's hands.

"I knew the layette was being made for someone else, but I couldn't help wishing it were mine," she said.

Come Christmas morning, for one of the few times in her childhood, there was a wrapped shoebox with Sandie's name on it under the tree. Inside, under some tissue paper, was a small doll wearing the delicate layette Eva Mae had hand-stitched.

"I had watched her make those clothes all those many months," Sandie said. "I had no idea that they had been made just for me."

A box of chocolates

When Stephen Hundley was a child, his family would visit relatives after the Christmas Eve service. One year, when Stephen was ten, a new tradition began. His family made a trip to their new pastor's home, bearing gifts from the congregation and themselves.

The Rev. Edgar J. Nottingham opened the family's gift very carefully—so the paper could be reused.

"He looked in, carefully removed the wrapper and opened his mouth with great surprise," Stephen said. "He declared 'My, my' and was clearly excited when he saw the (box of candy known as a) Whitman's Sampler. He shared it with all of us with great excitement."

For many years beyond Rev. Nottingham's appointment to Stephen's Virginia church, the Hundley family continued to wrap a gift for the great family friend.

"And you guessed it—a Whitman's Sampler," Stephen said. "He opened it, even in his last days some thirty years later, the same way—careful with the wrapping, looking in the end, a big 'My, my,' and an exciting sharing to follow."

"Isn't this what it is like for us in Advent and Christmas?" asked Stephen, who is now a pastor himself and Executive Director of Connectional Ministries for the California-Pacific Conference.

"We know what is going to happen, the Annunciation, the Visitation, Magnificat, the journey to Bethlehem and the blessed birth—and we look on in amazement the same way each year—'My, my' and share the story. May it never get ordinary—the same gift—never ordinary." 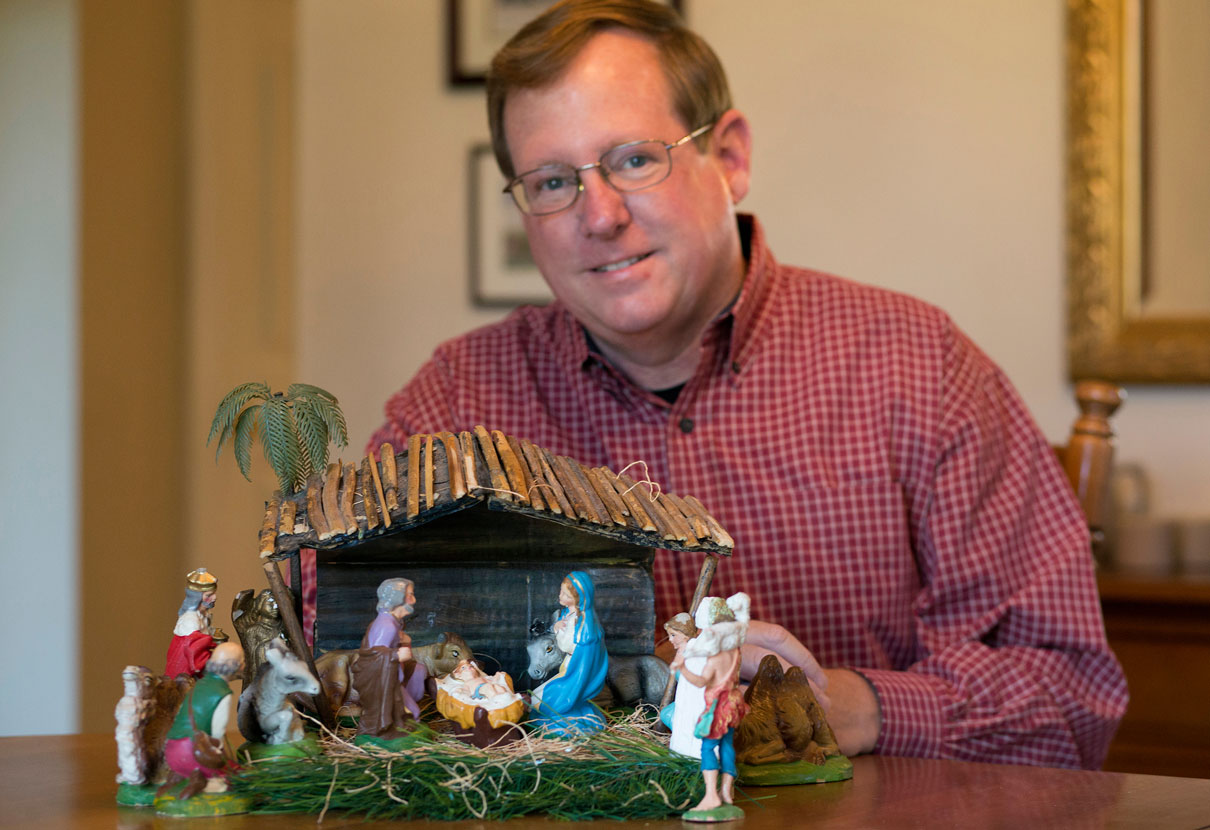 Every year around Christmas, Gilbert Lovell has an assigned job. No, it's not untangling the lights or separating the tinsel. His task is to locate one particular well-worn box from the holiday decoration closet. Gilbert carefully unpacks the family Nativity scene handmade by his mother in the early 1960s. It's "wobbly," made from sticks, felt, straw, cracked glue and a few surviving nails. The figures are molded from plaster of Paris. A camel has lost his head. Joseph has seen better days. And the plastic palm trees are drooping.

As he reconstructs the fragile stable stick by stick, and finds a place for the cattle, Wise Men and manger, he remembers the crafts-maker, his mother.

"I am humbled by the heirloom Nativity that I am struggling to keep from collapsing," he said. "But, most of all, I think of a lady who personified love and gentle grace to me."

"Just as it has been for the last 40 years, that nativity will be placed carefully on the corner of the hearth," Gilbert said. "Because of where it came from, who made it, and the love it represents, I will probably cry a little and I will be thankful. Let the season begin!"

We'd love to hear about your most memorable gifts. Just add a comment in the section below.

This story was first published on December 3, 2014.