The 24-room Ubuntu Retreat Center at Africa University has opened to great guest reviews. A 12-person mission group, made up of the Chaplain and students from the Wesley Foundation at the University of Michigan, was the first to be housed at the center.

"The rooms were well-furnished and had a home-like feel to them," Mulenga added. "The facility was indeed comfortable and exceeded my expectations for on-campus guest housing." 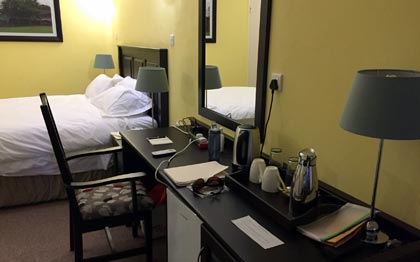 Two other groups, a volunteers in mission from the Baltimore Washington Conference and a delegation from the St. Paul School of Theology in Kansas, were also accommodated at the center in March.

The Ubuntu Retreat Center is a gift from the West Michigan Conference, where a campaign co-chaired by the former Grand Rapids District Superintendent, Rev. Dr. Laurie Haller, and Mr. Ed Edwardson generated more than $500,000 to fund construction.

Campaign leaders reached out throughout the conference with the invitation to participate, and all six districts responded with significant gifts. The generous outpouring of support among United Methodists in the West Michigan Conference, during a period of intense economic difficulty for the area, moved an anonymous donor to make a matching gift.

The campaign proceeds and matching gift provided funding of more than $1 million for Ubuntu Retreat Center.

It is located on the hillside that overlooks the Kwang Lim Chapel and the central area of the Africa University main campus in Mutare, Zimbabwe. Members of the AU Board of Directors, attending their first meeting for 2016 (February 10-12), toured the center. They hope to welcome leaders from the West Michigan Conference to the campus for a formal opening event later this year.