Veterans ministries at church: By and for those who served

In nearly every United Methodist congregation in the United States, veterans are active. They serve as pastors, Sunday School teachers, choir members, committee chairs, and so much more.

Those who have served the nation through the armed forces are "brothers and sisters in Christ who have already demonstrated that they're going to give you everything," explains the Rev. Felicia Hopkins, a veteran of the United States Army, and pastor of St. Paul United Methodist Church in Abilene, Texas.

On Sundays, St. Paul offers a special Sunday School class for veterans led by veterans. Charles Rice has found a spiritual home because of the class called Pathfinders. "This class is what keeps me coming back to this church," he says. 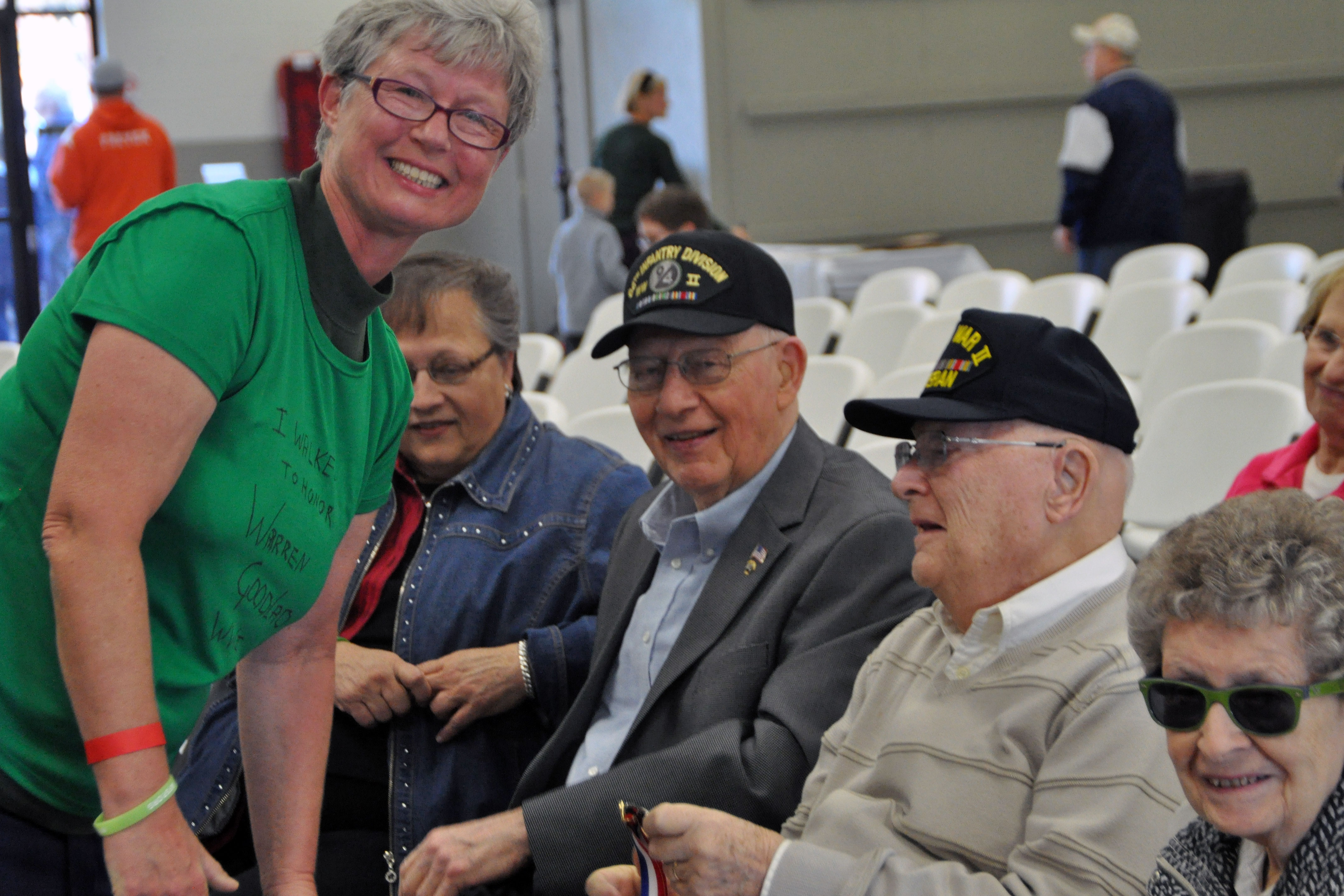 Tapping into the many gifts of the veterans in their congregations, many United Methodist churches are finding new ways to reach out to their communities through ministries that serve veterans and their families.

A large ministry with veterans

The vibrant Veterans Ministry of Cascade United Methodist Church in Atlanta, Georgia, provides "healing, support, and fellowship to all veterans." The program has also been designed "to function as an educational and mentoring resource" for veterans in the congregation and throughout the community.

Robert Haley, veteran and advisor to Cascade UMC's Veterans Ministry, shares how the ministry has grown, both in numbers of people participating and variety of programs. "It's been built on a foundation that's pretty solid," he says, remembering passionate and committed U. S. Army veteran Johnny Miller who founded the ministry in 2002. Miller received the Purple Heart for his service during the Vietnam War.

The Veterans Ministry is active in both the church and the community. In the winter, they support the USO Holiday Leave Program that provides care packages and support to the service people traveling through Hartsfield Jackson Airport during the Christmas season. In the summer, they help Georgia National Cemetery prepare for Memorial Day. Throughout the year, they support veterans with housing assistance and transportation to the Veterans Administration offices. 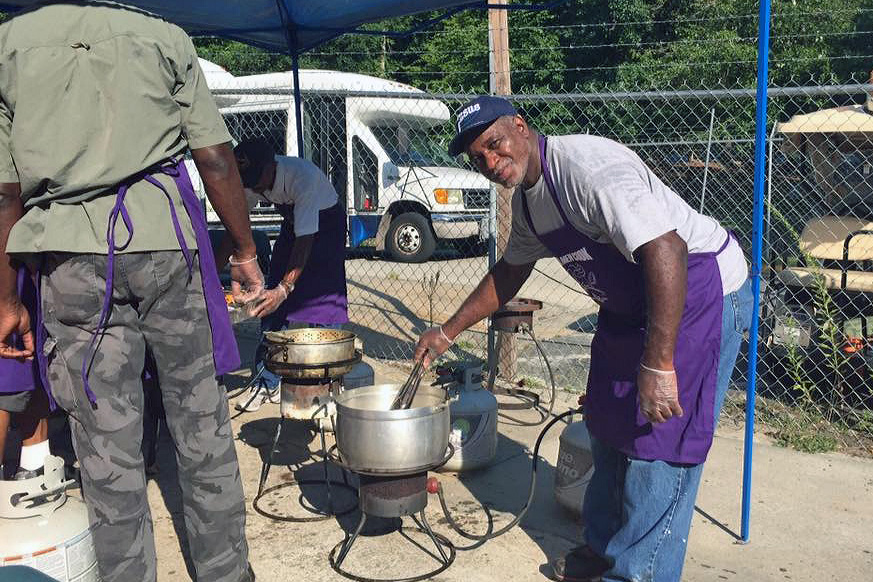 Additionally, they visit sick and shut-in veterans, support a local homeless shelter, provide two $1,000 college scholarships, cook for church events, and so much more. Like all veterans, they are willing to go the extra mile to serve one another, their community, and their church.

Veterans Day Weekend is always special for Cascade United Methodist Church's Veterans Ministry. On Saturday, they host a banquet fundraiser for approximately 400 people. They then lead a special veterans' worship service at church the next morning. In recent years, their speakers have included two-star generals, U.S. Congressman John Lewis, and Andrew Young, former United States Ambassador to the United Nations.

A season of thanks for service

Each year, the congregation selects a community need on which to focus. In 2016, they chose to support ministries with disabled veterans. They called the initiative "Operation Salute: Honoring Our Heroes."

Senior Pastor the Rev. Mark Watkins says the months-long fundraising celebration was a way for the congregation to support an important local ministry, and to lead the community in saying thank you to those who have served. 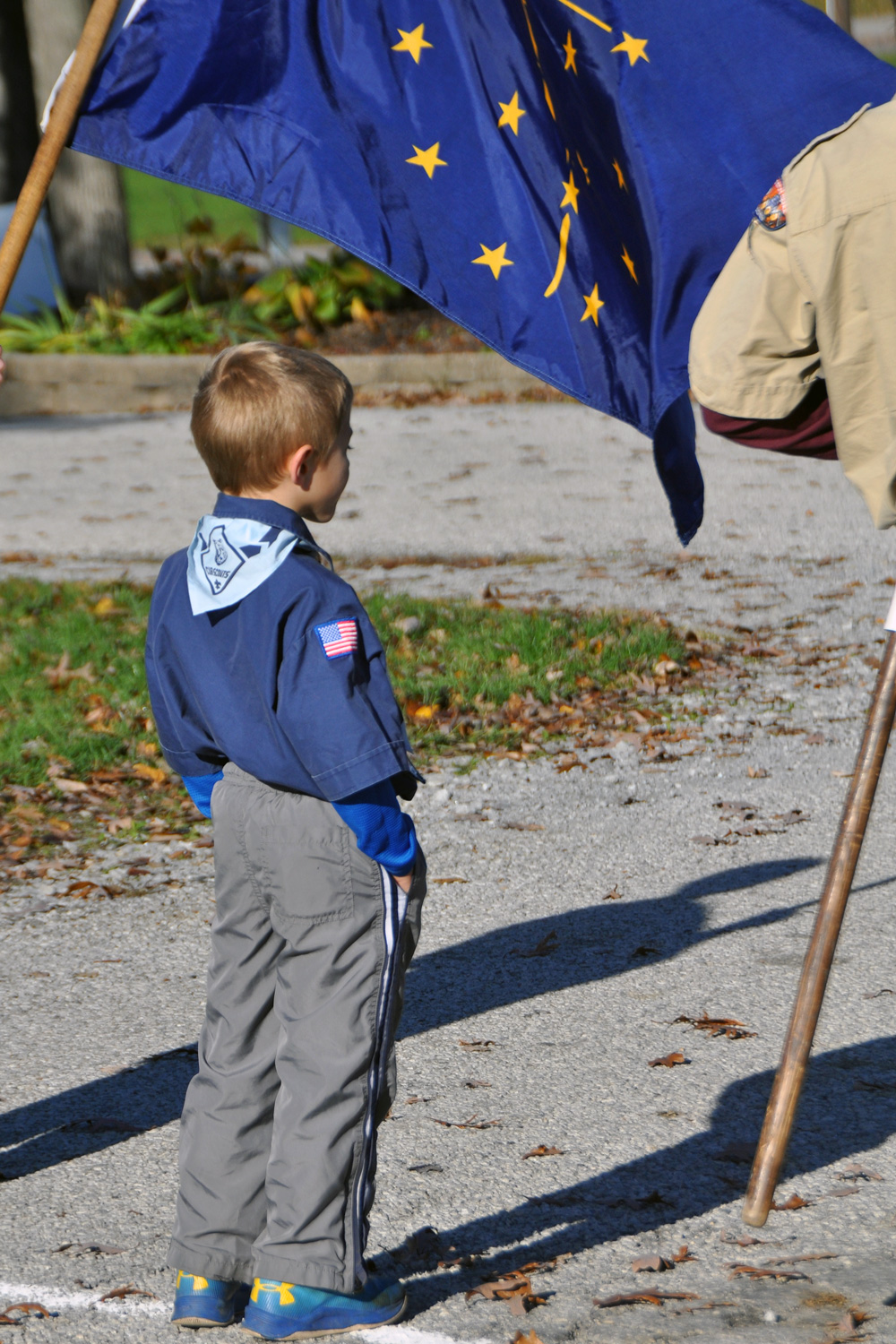 Fundraisers included a Halloween dinner-dance, a 5K, and a benefit football game between the church's "Monsters of Main Street" and a group of veterans from the local gas and electric company, NIPSCO.

To honor veterans, they hosted a thank you rally at the local fairgrounds. Featured speakers included a retired Admiral who had worked in the Pentagon, a representative from Wounded Warriors, and a local judge who is pioneering a Veterans' Treatment Court in the community.

The congregation also distributed green lightbulbs to their neighbors. In the days leading up to Veterans Day (November 11), homes throughout Crown Point displayed the illuminated bulbs in their windows.

Through these events and some special donations, First United Methodist Church increased awareness of the needs of the veterans in their community, and raised money. The congregation donated approximately $7,000 to the Northwest Indiana Veterans Action Council to support programs and services for disabled veterans.

When Army Intelligence veteran and Licensed Marriage and Family Therapist and Substance Abuse Counselor Julian Pickens came to Sun Lakes, Arizona, he noticed needs in the community and among his fellow members of the local chapter of the Veterans of Foreign Wars (VFW). 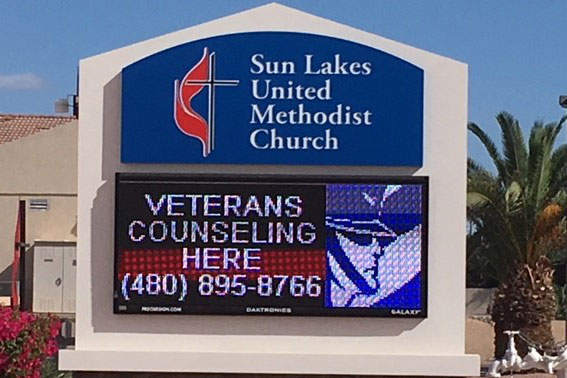 So Pickens approached the local VFW with an idea.

Today, through the work and generosity of Sun Lakes United Methodist Church and the local VFW, veterans and their family members pay just $5 per hour session with one of the of the counselors. The VFW pays the rest. Counselors provide services for grief, transitioning to retirement, marital issues, substance abuse, and more.

The ministry is growing as the community learns of its availability. A sign in front of the church announces that the congregation offers "Veterans Counseling Here."

Serving those who serve

By using and developing the gifts, talents, and resources of the veterans in their congregations, each of these United Methodist churches is reaching out to the men and women who have served their nation in the armed forces. They recognize the unique needs of veterans and together minister to the veterans among their members and in the community.

Taking on these ministries, "can be fun, challenging, and sometimes confusing," Wilkins shares, "but oh baby is it worth it."