“I don’t know how to be a Christian and not be engaged in things like this,” said Steve Holz-Russell, missions coordinator at Park Hill United Methodist Church in Denver. “I wish it wasn’t as unique as it is.”

From June to December 2021, Park Hill UMC members pitched 40 fishing huts on the church’s parking lot as part of the city’s “Safe Outdoors Spaces” program for people experiencing homelessness. Park Hill UMC is one of a number of United Methodist congregations who have discovered that inviting people without housing to rest and recharge on church property is a cogent way to put their faith into action.

“Park Hill has a long history of trying to do our best to love our neighbors as we can, especially those who are most vulnerable,” said the Rev. Nathan Adams, Park Hill’s lead pastor. “We often ask ourselves, ‘How can we not just say the right things, but actually do the right things?’”

Aware of rising rates of homelessness and Jesus’ words on inviting in strangers (Matthew 25), church members involved in parking-lot ministries say that offering rest and connection to their neighbors, even if it takes a lot of work, should be a no-brainer.

The congregation was surprised when nearby homeowners filed a lawsuit against the church and pastor for hosting the homeless camp. The lawsuit was dismissed, and Park Hill UMC members were allowed to care for their guests over a six-month period, until the city moved the encampment to another location.

Holz-Russell said it was “stressful yet meaningful” when he was called “un-Christian” by some for supporting the commitment to host un-housed neighbors on church property. “There is a perception that because we are nice and polite Christians, we won’t do these kinds of things,” he said. “The irony is that Jesus wasn’t running around being nice and polite. He was challenging people.” 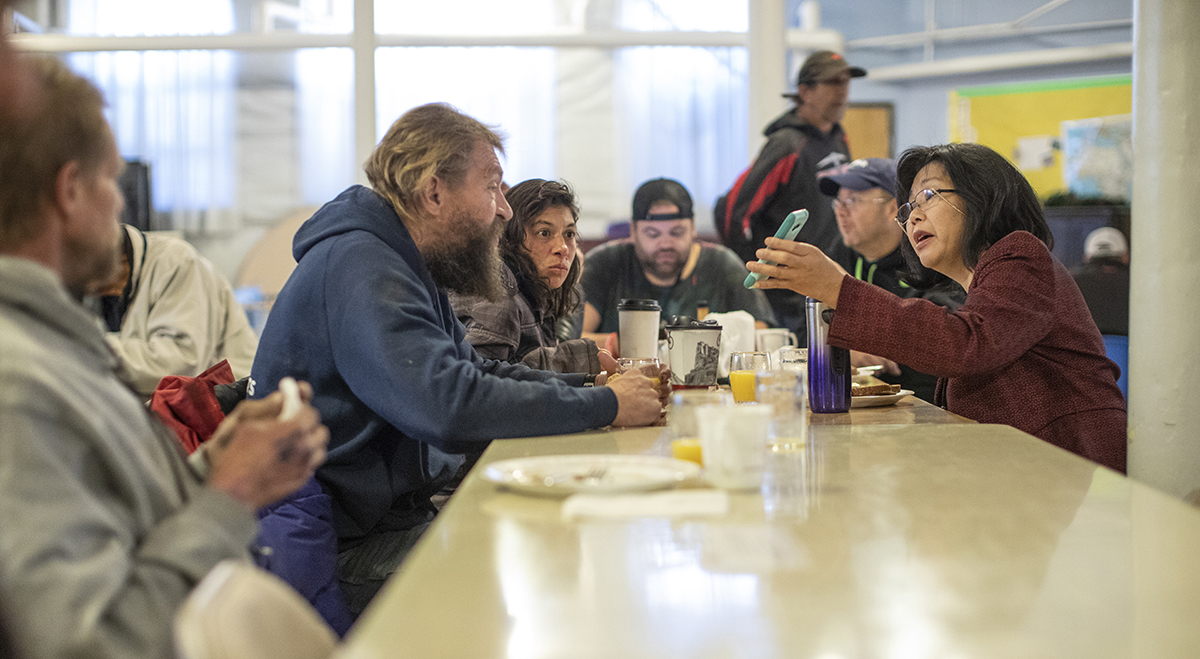 Facing homelessness can be scary. Ask The UMC shares information about where you may find help. Learn more.

David Lynd was living in his truck in Golden, Colorado, when he saw a pamphlet advertising a parking lot ministry at First United Methodist Church of Golden. He was surprised to read about a church that offered its parking lot as a safe place for people without shelter to park their vehicles and sleep.

“I didn’t even know the Methodist church was doing that,” he said. “I had already been there a couple of times for lunch, so I emailed them.”

For 10 months, Lynd became one of 10 to 12 families relying on the parking lot at FUMC Golden as a temporary home.

“Normally, they would stay in a Wal-Mart or some other public parking lot, get hassled every three or four hours by a security guard or police, and then have to move on,” said Reid Lester, connectional ministries director at Broomfield United Methodist Church in Broomfield, Colorado.

The parking lot ministry at Broomfield gives people living in their cars a safe and welcome place to sleep from 6 p.m. to 7 a.m. “We hear stories of how this ministry provides a stable point in their lives where they can get consistent sleep,” Lester said. “They can wake up feeling more refreshed, allowing them to move on to the next thing they need to do.”

While some churches have recently opened their parking lots as nocturnal homes in partnership with city-sanctioned “safe parking” programs, Lake Washington United Methodist Church was a frontrunner that created its ministry for women and families living in their cars more than 10 years ago.

“We just made it up as we went along,” said Karina O’Malley, Lake Washington’s Safe Parking coordinator in Kirkland, Washington. “We have been invested with folks who don’t have houses a long time.”

Dawn Marie Anderson is not a member at FUMC Golden, yet she feels drawn to volunteer there for the safe parking ministry known as “Home in Golden.” Her job is to check on and communicate with the 11 current parking lot residents, helping them get their mail at the church and connecting them with other services.

“The church is where you go when you need help,” Anderson said. “I’m now aware of how much churches do when they’re not just preaching the gospel but living the gospel.”

Annette Spence is editor of "The Call," newspaper of the Holston Conference of The United Methodist Church. Media contact for UMC.org is Joe Iovino. He can be reached by email.