As Hurricane Dorian threatened the U.S. east coast in September, United Methodists were connecting with Methodists in the Bahamas to start relief efforts.

The Bahamas Conference of the Methodist Church fielded requests to help those evacuated from the “unprecedented devastation” to receive basic supplies and find a place to live, says its president, the Rev. L. Carla Culmer.

But the survivors also need someone to hear their stories. “We want to see how we can counsel and listen and be there for them,” she told UM News in a Sept. 5 phone interview.

UMCOR has awarded a solidarity grant to Bahamas Methodist Habitat for immediate, emergency short-term funding to address basic human needs. The relief agency also expects to partner in the Bahamas with the Methodist Church in the Caribbean and the Americas.

After striking the island nation on Sept. 1, Hurricane Dorian caused “vast devastation” and left 70,000 people in need of immediate humanitarian relief, says Mark Lowcock, head of the U.N. Office for the Coordination of Humanitarian Affairs. 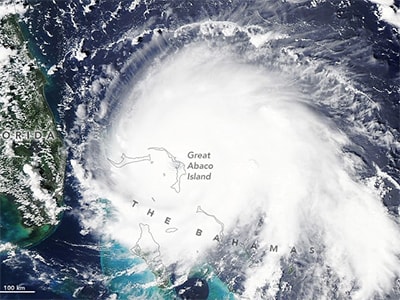 A NASA satellite image captures Hurricane Dorian over the Bahamas on Sept. 1, as the powerful Category 5 storm was directly over Great Abaco Island. Dorian became the strongest hurricane on record in the northwestern Bahamas. NASA Earth Observatory image by Lauren Dauphin, using MODIS data from NASA EOSDIS/LANCE and GIBS/Worldview.

Bahamas Prime Minister Hubert Minnis called Dorian the most damaging storm ever to hit the island group, Reuters reported. Worst hit was the Abaco Islands in the northern Bahamas and Grand Bahama Island. As of Sept. 5, the death toll was 20.

“People were traumatized because the storm lasted so long,” Culmer, pastor at Wesley-Grants Town Church in Nassau said.

Her conference’s disaster response ministry, Bahamas Methodist Habitat, is based at Camp Symonette on Eleuthera Island.

The Rev. Stephanie Gottschalk, executive director of Bahamas Methodist Habitat, noted that the population of the Bahamas is similar to Pittsburgh and that the 70,000 or so in the Dorian-affected areas “represents about 18 percent of the population … so this is felt nationwide.”

Donations to UMCOR are the best way for church members to respond, Bishop Bickerton said.

“One of our goals as Methodist Habitat is to have teams come in to do disaster mitigation work,” she said. That includes making structural repairs before storms arrive, so there is greater resiliency and fewer deaths.

Gottschalk expects Dorian will require at least a two-year recovery period. “There will be significant portions of both islands that will need to be totally rebuilt,” she said.