Spring is a time of anticipation for people who make their income fishing along Alaska’s Aleutian Islands – that tail of volcanic formations stretching almost to the Siberian mainland across the Bering Strait. Among the many commercial and industrial fishing rigs in the Alaskan waters are also Native American rigs, smaller, but still able to haul enough fish from the waters to last their families and communities over the winter season. Spring means the ice will thaw, the fish will migrate North once again, and the salmon will return home to spawn. Or – will they?

Most years, the indigenous Chignik communities on the Pacific (Southeast) side of the Aleutians catch about 1 million sockeye salmon during the season, which provide ample food and needed income from fish sold at market. In 2017, a very good harvest year, the Alaska Fish and Wildlife commission reported that the Chignik area harvested more than 8 million of the five different species of salmon in the region. Their communities have maintained life and livelihoods by fishing for centuries.

But in 2018, the number of sockeye caught commercially by the Chignik fisheries, their staple and greatest resource, was 128 fish – total – 128 individual fish. Total salmon catch for Chignik fisheries for the year was a little over 1000 fish. 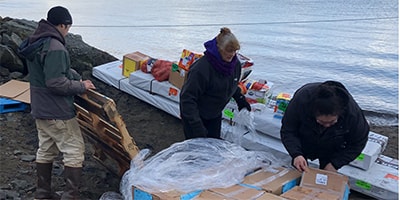 Food and supplies unloaded on the shore for distribution to Chignik villages on the Aleutian Islands, Alaska. Photo: Courtesy Chignik Intertribal Council.

According to Chignik elders, these communities have never sought or received outside assistance. Despite state acknowledgment of the fisheries failure and the communities’ declaring and seeking acknowledgement for their unfolding economic disaster with the local government specialist, Alaska is currently operating with a two to three-year backlog, releasing funds for aid and infrastructure projects two years later. The Chignik communities needed immediate assistance to survive to the next fishing season. The National Tribal Water Center referred members of the Chignik Intertribal Council (CIC) to the United Methodist Committee on Relief as a trusted source for assistance.

“Because we are an independent humanitarian relief agency, UMCOR has the unique ability to spring into action and respond quickly to emergent needs,” explained Lorrie King, UMCOR’s program director for WASH, food security and livelihoods.

Partnering with the Bristol Bay Native Association, UMCOR funded a food security program to source, transport and deliver food, pantry and household items throughout the winter months and into this summer’s fishing season. These shipments kept the Chignik households food secure. Implicit in the program is also the introduction of a CIC climate mitigation strategy and food resource plan for 2019 and beyond.

A second UMCOR grant addressed the needs for winter clothing for children and youth in the Perryville community. Long underwear, coats, gloves, hats, long pants andsweaters were beyond reach for many Chignik households. Income that would have paid for these goods disappeared with the salmon that never arrived for harvest.

Chignik residents who received shipments of food and other household items have expressed gratitude to CIC in various ways.

The changing climate in Arctic regions have made the ebbs and flows of the natural world difficult to predict. Yet, with hope and the grace of God, new partners and old friends within the community will see the Chignik through another season.