For more than 100 years, Methodist men have been gathering to study scripture, volunteer and be in community with one another. Throughout those years, men's ministry has evolved to meet the needs of men in local churches; today, John Wesley is offering direction for the next step.

Attendees convene at the 1913 national gathering of Methodist men. Photo submitted by the General Comission on United Methodist Men.

"The United Methodist Men have always been willing to serve, but we are not just a group who can help park cars," said Steve Nailor, president of the National Association of Conference Presidents. "We are on a mission to create disciples for Jesus Christ for the transformation of the world."

Nailor has been a member of United Methodist Men for 37 years and was present when the General Commission on United Methodist Men was formed at the 1996 General Conference. He has seen many developments in men's ministry over the years, such as a long-term dedication to scouting and prayer ministries, increased mission work, and most recently, the incorporation of small-group meetings.

"Now there is more of an emphasis on changing lives and making a difference," he explained.

Life-changing small groups are becoming a source of rejuvenation in United Methodist Men units across the U.S. The groups are Wesleyan at heart, utilizing the book The Class Meeting to guide them as they embrace a small-group concept that was a key part of faith formation in the early Methodist Church.

"People who gather every week to pay attention to their relationship with God will grow in that relationship," said Kevin Watson, author of The Class Meeting. "Class meetings provide a format that helps people actively grow in their faith in Christ together in community, not just study information."

"Many United Methodists have lost the vocabulary for talking about their soul, their relationship with God. The class meeting, as envisioned by Wesley, was a place for church members to examine their current state of faith by answering the question, 'How does your soul prosper?'"

"I've seen guys start this process, where you ask, 'Where did you see Christ this week?,' and they say, 'I didn't; I didn't look,'" said Hanke. "Those same guys now are excited. They can't believe what they have been missing. It's not that God wasn't there, it's that they weren't open to seeing him and feeling his presence and his direction."

Many United Methodist Men small groups form within local churches or communities and they meet in person; others are comprised of men who do not initially know each other and use technology to connect. This allows greater flexibility for busy schedules and provides an opportunity for relationship-building no matter where group members might be. 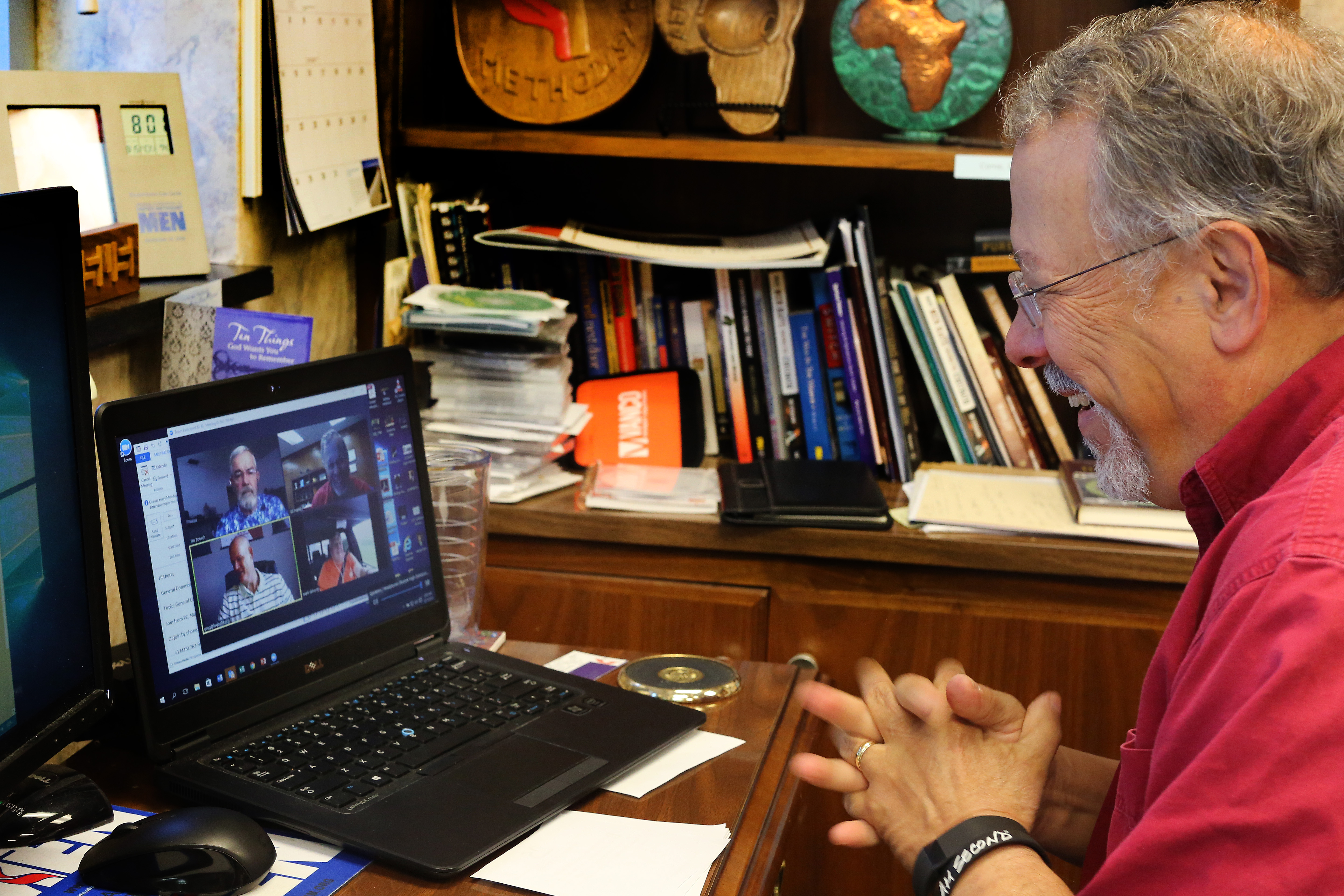 Nailor is in one such group, which includes men in four different states who utilize Zoom to meet online. He said, "Technology allows a chance to cross all spectrums of life. Small groups can become very personal, and we are seeing more men who are willing to be open to sharing where they are."

Charlie Lyons has been a member of United Methodist Men for six months. His journey began with a group of young men in his community who "needed an accountability and devotion group," he said.

Once formed, the small group became part of the United Methodist Men at First United Methodist Church in Asheboro, North Carolina, and quickly adopted technology to forge a deeper connection.

"We are a group of about 14 guys who meet once per week face-to-face, but stay in touch throughout the week using the Band app. We post photos, Scripture and share experiences we have," Lyons continued.

Lyons is also part of a "Younger Men's Think Tank" in the Southeast Jurisdiction of The United Methodist Church. The think tank has been meeting regularly to find ways to re-energize 18- to 40-year-old men of God.

The United Methodist Men will examine men's ministry opportunities and transformational small groups at its national gathering July 7-8, 2017, in Indianapolis, Indiana. The event is held every four years so that men can discuss ministry, explore opportunities for mission work and build community with other men who are also on a journey to strengthen their faith.

"We are exploring where men's ministry might go next. There are many areas to learn about and we are digging into those," he said. "We are moving from a research phase to an action phase."

Wesleyan-based transformational small groups are one of eight areas of growth that the think tank has identified to reach out to a younger generation of men.

Hanke agrees. "We want men to discover a more purposeful mission for the men of their local church and to change their own behavior into something that is closer to Christ," he said.

*Laura Buchanan is a PR Specialist at United Methodist Communications.