Gabriela Torres Toro, a student at the University of Puerto Rico in Ponce, has her life mission in mind.

The World Communion Sunday scholarship recipient wants to be an official translator for missionary groups after graduation.

Her career choice, she said, will help her use her faith "to help spread the Gospel to other people that speak a different language. To show that even though there might be language barriers, the love of God has none."

Toro, who attends McCabe Memorial Methodist Church in Ponce, said she was raised in the church by her parents and grandparents. It's that upbringing, she said, that helped shape her future path. 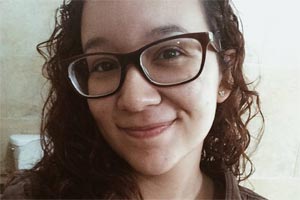 "My church has always been there for me. It gave (me) my primary education, from pre-K until 6th grade, because of the school my church has. It also educated me in the Word of God and gave me the opportunity to participate with missionaries from the U.S. during (vacation Bible school)."

She said it's that experience that led her to study languages, "so I can communicate more with people and show them the ways of the Lord."

Toro is grateful for the World Communion Scholarship and encourages United Methodists to continue to support the program.

"It has helped my parents pay for my school tuition since I wasn't eligible for other scholarships, and it has given me the opportunity to keep studying."

She wants other students to have that same opportunity.

Toro continues to be involved in missionary work while in school. She's currently working with Praying Pelican Missions, an organization that connects local churches with global missions.

"I am a translator for them when they bring missionary groups to my church or other churches in Puerto Rico," she said.

She wants to continue to spread the word of God after graduation.

"My goals are to finish my bachelor's degree, to learn as many languages as I can and to show the love of God to as many people as I can, no matter where they come from or who they are."